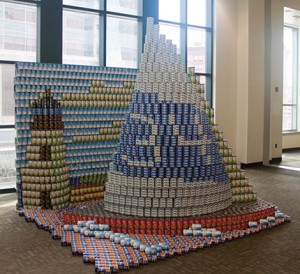 Providence, RI Six Canstruction RI sculptures, created from full cans of food by teams of architects, engineers and contractors for a two-week March exhibit at Providence Place resulted in a donation of 29,514 pounds of non-perishable goods to the Rhode Island Community Food Bank (www.rifoodbank.org). The total beat the R.I. biennial event’s 2014 record by 1,174 pounds.

The volunteers re-created favorite characters like R2D2 and BB8 from Star Wars: The Force Awakens, Dory from Finding Nemo and the upcoming Finding Dory, and Left Shark from the 2015 Super Bowl halftime Show along with a taste of everyone’s favorite coffee, Dunkin’ Donuts, a magic lunchbox, and a tribute to the Ocean State.

To inspire further participation and donations as well as more public awareness of significant problems of food insufficiency, the event also is organized as a competition – locally and internationally. Canstruction  (www.canstruction.org) is a national food charity of the design and construction industry that has helped raise nearly 40 million pounds of food since 1992.

The juried R.I. and international award categories are Best Meal, Best Use of Labels, Structural Integrity, Jurors’ Favorite and Honorable Mention. Photos of sculptures honored with Canstruction RI awards are entered in the same categories in the annual international competition. A local People’s Choice Award was voted on by visitors to the Food Bank’s Facebook page. All other winners were chosen by an independent jury composed of local experts and professionals.

Participating teams, their sculptures and awards were:

• Saccoccio & Associates, Cranston; DiPrete Engineering, Providence; and H. V. Collins Co., Providence: May the Force be with us to Eliminate Hunger, Best Meal

“Once again I am amazed by the creativity and ingenuity behind each Canstruction sculpture,” he said. “And I’m even more pleased that this event raises awareness of hunger in the state and helps stock our shelves with nearly 30,000 pounds of food. We appreciate all of the hard work and dedication behind this effort.”  Each month, the Food Bank serves 60,000 people through a network of 167 agencies such as food pantries, shelters, youth programs and senior centers.