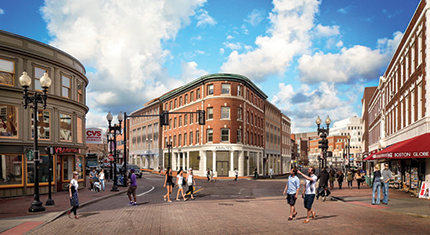 Cambridge, MA Shawmut Design and Construction has begun its work on The Abbot Buildings. Located in Harvard Sq., the rehabilitation includes the restoration of two existing buildings and the construction of a new infill building to create 60,000 s/f of updated mixed-use space. 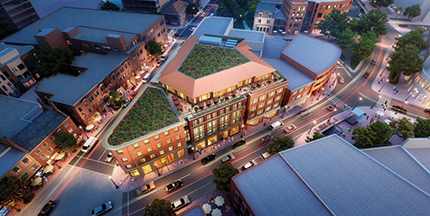 Shawmut, in partnership with Regency Centers and architecture firm Prellwitz Chilinski Associates, is working on the extensive overhaul of the buildings that includes a renovation of two existing structures, The Abbot and 18 Brattle St., as well as demolition and construction of a third, four-story infill building. Designed to meet the needs of modern businesses and tenants, the renovation will preserve the historic character of the structures while enhancing the space for the 21st century. Located at 1-7 John F. Kennedy St., the trio of buildings will feature updated retail, restaurant, and office space, along with an all-new green roof deck that will have views of both Harvard and Brattle Sq.

“Shawmut is incredibly honored to restore and enhance such an important landmark for the Cambridge community,” said Kevin Sullivan, vice president at Shawmut. “Our expertise working on historical and cultural buildings made us the perfect partner for this project. The project team has worked closely with the community, planning department, and Historical Commission to achieve a design and plan that is both elegant and responsive to the current needs of tenants while preserving the buildings’ rich history.” 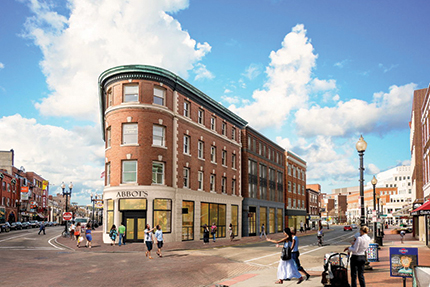 The project, targeting LEED Silver certification, includes façade restoration, interior improvements to existing retail and office space, as well as a newly constructed mixed-use space. The new design will revitalize the current buildings, built in 1894 and 1909, to their original condition, while adding a third that is compatible in material, scale, and design, but features a modern and updated space. In addition to the core buildings, Shawmut will also restore the brick walkway on Brattle St. as well as construct the green roof deck, further creating a safe and enjoyable experience for tenants and pedestrians.

The Abbot Building, originally built in 1909 by real estate investor Edwin Abbot, was the first purely commercial Georgian Revival style building in Harvard Sq. The design was aimed to reflect the prestige of Harvard University and establish a new architectural character for the business district. To this day, it remains one of the most iconic buildings in the area and is protected under the Harvard Sq. Conservation District.

The Abbot Buildings represent the latest in a series of high-profile historic projects in New England for Shawmut, including the Mount Auburn Cemetery’s Bigelow Chapel, Boston University’s Myles Standish Hall, and Mother Church at The First Church of Christ, Scientist.