Hartford, CT Developer RMS Companies’ founder and CEO Randy Salvatore, mayor Luke Bronin, and a delegation of stakeholders and state and city leaders celebrated the long-anticipated start of construction of the $50 million first phase of the Downtown North redevelopment project.

The groundbreaking officially launched work on the buildings going up on Parcel C of the project that, when completed, will have 270 studio, one and two-bedroom apartments, a ground-floor restaurant, retail and entertainment space, and a 330-space parking garage. Parcel C is located north of Dunkin’ Donuts Stadium at Main and Trumbull Sts. The project, expected to be completed in about 20 months, is being funded, in part, by the Capital Region Development Authority (CRDA).

“It is indeed exciting to, at last, be moving ahead on this vitally important project and to be doing it in the right way, with a responsible partner who has a track record of success and the ability to bring this project to completion,” Bronin said. “This development has always been the most important part of this area’s promise because it’s between downtown, Albany Ave., and North Main. With the legal challenges and now the pandemic, it’s been a tough road. I’m proud that we were able to deliver.” 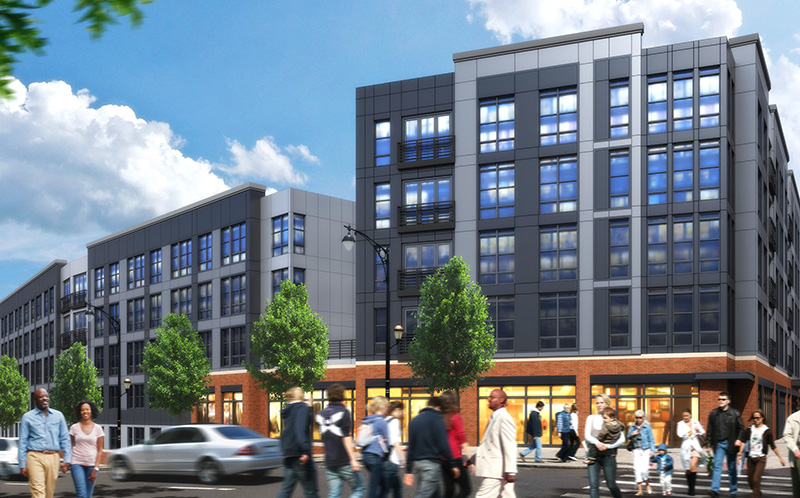 Parcel C is one of four city-owned parcels being redeveloped as part of the $200 million Downtown North project. Plans call for as many as 1,000 apartments, restaurant and entertainment space, and parking garages to be constructed on the expanse of parking lots encompassed in the project over the next five years. Salvatore has completed numerous projects throughout the tri-state area. He is behind the restoration of the city’s Goodwin Hotel and a $200 million mixed-use development in New Haven.

“I am so excited to be breaking ground on the first phase of the DoNo project after working closely over the past two years with the Mayor, elected officials, and members of the community to develop a shared vision and plan for the project,” said Salvatore. “Despite the current pandemic, I remain as bullish as ever about the long-term prospects for Hartford and this development in particular.”

“Our focus has always been on the future of Hartford and our vision of what the city can be,” said Michael Freimuth, executive director of the CDRA. “I want to commend Mayor Bronin for keeping this project on track under extraordinarily challenging circumstances. I also want to thank Randy Salvatore for his faith in the City of Hartford and its potential.”

The majority of apartments in the project will be market rate, but the development agreement with the city that Salvatore signed in March calls for a minimum of 10% affordable housing. Plans also call for the addition of a grocery store in a future phase of the project.

“This is a transformative project, and I am so pleased to see it getting underway,” said city council president Maly Rosado. “This is a win for city taxpayers and for all city residents, thanks to Randy Salvatore working with neighborhood leaders to ensure the plan incorporated their needs and concerns.”