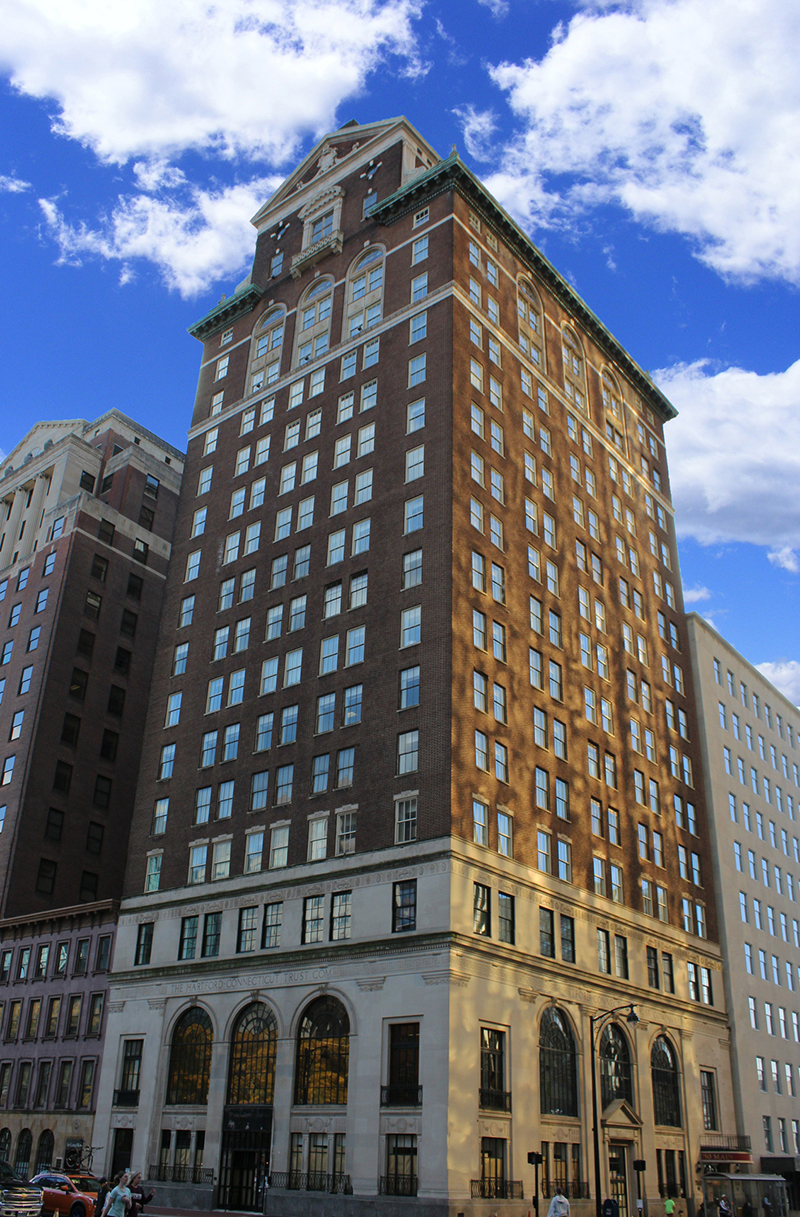 Hartford, CT The Stark Building located on 750 Main St., known until 2018 as The Hartford-Connecticut Trust Company Building, is celebrating its 100th anniversary this month. Officially opened on September 5, 1922, The Stark Building was a construction marvel of its time. It is one of the oldest and most celebrated high-rise commercial buildings in the state.

When The Stark Building first opened in 1922, it was considered to be such a momentous occasion that the Hartford Courant dedicated almost its entire main section to the building. At 17-stories and a height of 256 ft., The Stark Building was one of the two main skyscrapers that dominated the city skyline. The construction of the building was an incredible exercise of architectural design wedded to technological ingenuity and it symbolized the growth of Hartford as one of the leading cities in New England. As the Courant notes, the building’s construction required over 2,000 tons of structural steel, 22,466 ft. of piping, 30 miles of electrical wire, 40,000 cubic ft. of limestone, three boilers, six passenger elevators, and one freight elevator. As the main branch for the Hartford-Connecticut Trust Co. It was the first building to use bulletproof glass and has vault doors weighing 27 tons installed in the basement. The building was so advanced for its time that it even had an automatic refrigeration system for the drinking water throughout the building.

“This building, just occupied by its owners, represents that latest idea in bank and office building design and construction in this country,” said the building’s architect Benjamin Wistar Morris (1870-1944). “The primary consideration throughout the operation were convenience, the economy of plan arrangement, and the best possible construction.”* The Stark Building is listed in the National Register of Historic Places as part of the Main Street Historic District.

Stark Office Suites and its investors purchased the iconic building in 2017 and commenced a significant renovation/modernization of the historic structure. “Transforming this classic into a modern premium office building right in the center of Hartford’s renaissance has been truly exciting,” said Adam Stark, president of Stark Office Suites. He and his team have worked painstakingly to preserve the character of this building while bringing it up to twenty-first-century standards. “We wanted to celebrate the building’s old-world charm by preserving the magnificent architectural features and reintroducing a formal doorman to greet our tenants to make the experience of entering the building unique and special,” he added. Significant upgrades to enhance the beauty and energy efficiency of the building included a newly remodeled lobby, LED lighting throughout the building, upgraded elevators, HVAC and plumbing systems, artwork displays throughout and in all common areas, and a unique fiber optic backbone that can give tenants access to managed phone and internet systems integrated into their leases. An outdoor colored lighting system of a similar format to what is used at The Empire State Building was installed and is used regularly for light shows for the benefit of the city.

On the occasion of The Stark Building’s 100th birthday, Adam Stark said “The Stark Building represents the grandeur of Hartford’s amazing past and the amazing potential for the city’s future. We are excited to be a part of the next 100 years of this incredible city.”

The Stark Building, located at 750 Main St. next to the Old State House in the downtown, blends all the modern amenities of a contemporary office facility with the Old World charm of a building steeped in history. The Stark Building offers a wide array of office solutions, ranging from single offices up to full floors with a flexible menu of services to choose from including high-end fiber optic managed technology and telephone systems, professional conference space, and access to all Stark Office Suites locations throughout Connecticut and New York.