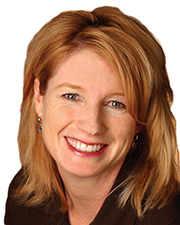 How many years have you been in your current field? 26

Which project, deal or transaction was the “game changer” in the advancement of your career during the last 10 years? I joined Vantage in 2003, not too long after the firm was founded, as the head of finance. As the firm grew larger, it was clear that we needed to have more structure around our human resources function. I took on the additional role and responsibilities, which required a significant amount of training and education. It’s been very fulfilling for me personally to have this added experience and it’s also been important to the firm and its employees. Additionally, the larger role elevated me to the firm’s senior management team. Having a woman’s voice at that level of the firm is important. We have two women on the senior management team, the same number as the men.

What was your first job and what did you learn from it? During high school, I worked at our town’s public library. While it wasn’t quite as exciting as the construction industry, I did learn some critical skills, particularly the importance of being organized and having a system. I may not have the opportunity to use my Dewey Decimal System skills at Vantage Builders! But my ability to stay focused and keep organized has been invaluable in my role, especially when we are busy and it gets a bit chaotic.

Who are three women – living or dead – that you would like to have drinks with and why? The first would definitely be my mother. I have never met a stronger, more determined woman… ever. Not in my personal life or professional life. There honestly isn’t enough space in this section to give her story justice. For similar reasons, I’d also pick my sister. The past year has been absolutely life-altering for her and her family and she has displayed such strength through it all. She’s truly an inspiration. Given what she’s endured during the past year, she could probably use a drink. My mother and sister immediately came to mind when I read this question, and I’ll leave it at just the two.

What were your biggest fears when you started out in your profession? My first job in the construction industry was as a receptionist and billing administrator. When the person in charge of the accounting department left for a fast-growing general contracting firm in Boston, she took me with her. I took advantage of that firm’s generous tuition reimbursement policy, taking classes at night for years and eventually earning my bachelor’s degree in Accounting. Between the full-time job, classes and homework, I worked long, hard hours. I continued to advance, eventually landing at Vantage Builders. I didn’t have a set plan from the beginning, other than my determination to grow. I think if I had a plan, I might have been terrified. So, in a way, when I started out, there was no fear.