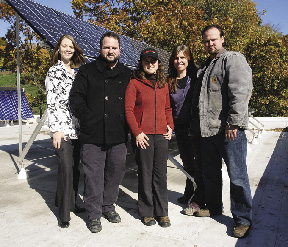 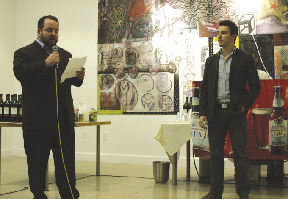 Shown at the grand opening are John Jacobson of JTJ Investment and Matt Grigsby co-founder of Ecolect, and chairman of Industrial Designer's Society of America Rhode Island Chapter.

Opposite the renovated ALCO development, is The Wolcott Eco Office at 28 Wolcott St., an 8,000 s/f mixed-use green building developed by environmental enthusiast and RISD graduate, John Jacobson of JTJ Investment, which officially opened on October 23.
Formerly a jewelry factory built in 1890 which became an electronics supply warehouse in 1941, the building has undergone a complete transformation at Jacobson's hand, to become the first and only commercial building in the state to be fully self-sustainable, powering its total energy needs from its own energy sources.
"I am passionate about sustainable development and want to demonstrate that sustainable commercial buildings are possible and affordable to build today," said Jacobson. "I am proud to say that I developed 28 Wolcott for $1.1 million, without any form of incentives. That represents a $1.1 million investment in the local economy benefiting local green contractors like SolarWrights, Viessmann and Green Building Floors. We can create beautiful, healthy and sustainable live-work spaces and in the process help new businesses grow and flourish in Rhode Island. At 28 Wolcott, the sun heats the whole building and generates electricity for the office spaces. I believe so much in the quality and energy efficiency of my building that I include the cost of heating and electricity in the rent. Solar power is great for the environment but it is also great when businesses don't have to worry about rising energy costs."
The Wolcott Eco Office is an Energy Star Certified Building featuring two office spaces for rent of 2,500 s/f and 3,000 s/f each, with an additional 2,500 s/f of live/work space to be occupied by the owner. There is parking for 25 cars and 2,600 s/f of shared outdoor patio space and a community garden.
The office spaces comprise Rhode Island's first and only net-zero environment with heating, cooling and electricity provided by the sun. Both domestic hot water heating and space heating are provided by Viessmann Vitosol 300-T solar vacuum tube collectors from Advanced Comfort Systems. Electricity is provided by 16 of the latest, grid-tied Kyoccera 205 d.Blue modules for a total of 3.28kw, installed by New England's SolarWrights.
The building benefits from being earth-sheltered and facing solar south. Jacobson performed extensive building envelope improvements far exceeding the RI Energy Code. Insulation in the form of open cell foam from Icenyne and NuWool was installed by New Insulation Solutions Inc. of Smithfield.
Energy Star and Watersense appliances are used throughout the building including the very latest in LED lighting from Providence based LEDalux and CREE LED Lighting Solutions.
Non-toxic (No-VOC) paints and sealers were used on the walls and floors. The doors are formaldehyde-free. The recycled countertops are GREENGUARD and NSF-certified.
Jacobson retained Lake Shore Environmental to complete environmental assessments of the property. LSE's report provided assurances to both Jacobson and his investors that they would not face a costly cleanup liability in the future.