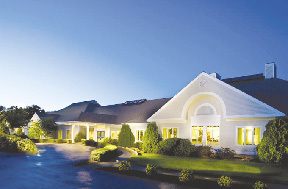 Southport's active adult golf community in has won two national silver awards from the National Association of Home Builders for the community's model home and website.
More than 600 entries were submitted in 51 categories in the annual competition. The awards were announced at the International Builders Show in Orlando Florida.
"This national competition is very competitive and to win an award at this level is very difficult, but gratifying," said Southport developer and builder Ronald Bonvie. The awards are among many that Southport has received including twice named as one of the "Top 100 Master Planned Communities in the United States for Active Adults" by Where to Retire Magazine.
Southport's "Hyannisport" model, which won the Silver Award for "Best Model Merchandising of a Home Between $300,000 - $500,000," was one of six new designs introduced last September and has been one of the most popular designs Bonvie said.
The 1,952 s/f design features two bedrooms, a finished lower level, large master suite and attached garage. A three and one-half season attached sunroom is a popular option that is featured at Southport's model park.
Southport's website, which won the national Silver Award for "Best Website for a Suburban Community," features interactive site plan, floor plan video tours and on-site and off-site amenities.
Among the website's most popular pages are the video tours of the floor plans and amenity pages which also feature tours of the clubhouse, nine-hole golf course and nearby attractions such as Mashpee Commons and South Cape Beach State Park.
Southport's extensive amenities feature a private nine-hole golf course, 32,000 s/f clubhouse with indoor and outdoor pools, tennis courts, fitness center and computer center, grand ballroom plus bocce and shuffleboard courts and 24-hour manned security at the main entrance.
The community is located 20 minutes form the Bourne and Sagamore Bridges, one mile west of Mashpee Commons off Rte. 151.
Three designer model homes and the clubhouse are open daily from 10:00 a.m. - 4:00 p.m..
For directions or more information visit their website, www.southportcc.com.
Tags:
Previous StoryNext Story
Print
PDF

This week's columnist:
How storytelling works - by Chuck Sink