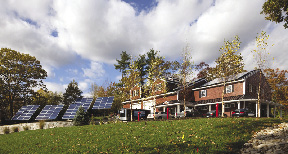 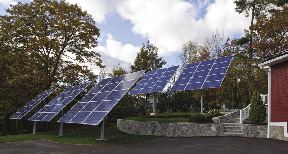 Pugliese Contracting Corp. has completed its new 8,000 s/f corporate headquarters at 4 Ledge Rd.
As a full service self-performing general contractor specializing in interior fit-ups, Pugliese Contracting showcased its many talents in this construction of this new ground up "green" building.
Pugliese's new headquarters has one of the largest solar systems in the state.
On Sept. 26, 2011 the Secretary of the USDA, Tom Vilsack, said that loans and grants were available for more than 500 agricultural producers and rural small businesses across the country to implement renewable energy and energy efficiency measures in their operations. Pugliese Contracting was featured in a national press release reading:
"The REAP program is also funding several other types of renewable energy and energy efficiency projects. For example, in Windham, N.H., the Pugliese Contracting Corp. was selected to receive a $99,500 loan guarantee and a $49,875 grant to purchase and install a 30 kilowatt solar photovoltaic system and a geothermal heating and cooling system in its 8,000 s/f operations center. Once installed, the system will reduce energy purchased from the grid by 100%. The geothermal system will provide 63% of the business's heating and cooling needs."
The new facility, which will house Pugliese Contracting's millwork and custom metal fabrication shop, is powered entirely by solar. Also featured in this building is Pugliese interior's flooring and tile showroom.
The facility was designed and engineered by Pugliese Contracting's in house architect, Chris Soucy, and engineer, George Khouri.

The green building systems include:
* The envelope, which was sprayed with soy, based isocyanate foam, which gave a thermal value of R-40 in all the walls when the code requires R-19 and R-70 in the roof when code requires a R-30.
* All the lighting is LED. This significantly reduced energy consumption combined with occupancy sensors throughout the facility so the lighting does not stay on when not being utilized.
* Pugliese used 130 Schuco Panels PS09 235 watt solar photovoltaic modules. The company also used Enphase Microconverters on each individual module. Both the panels and Microconverters have a 25-year warranty. We were able to offset almost our entire electric bill with the Federal, state, and USDA REAP Grant. Pugliese will realize an estimated savings of about $600 a month. By going with geo-thermal the company has eliminated any heating bill in its entirety.
The heating system is a geo-thermal system that incorporates a 6-ton climate master heat pump, which is entirely powered by the onsite photovoltaic solar power. Combined Pugliese used a Venmar High Efficiency Air Exchanger.
Tags:
Previous StoryNext Story
Print
PDF