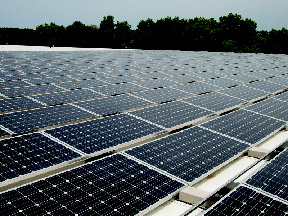 The city's largest rooftop solar array has been installed atop the Leewood Building in the Newark St. industrial park. It will provide up to 95% of anchor tenant Swix Sport USA's electrical requirements.
Besides electricity supplied to Swix Sport, additional energy is being sold to National Grid, providing a renewable source of power for the region. "It is a step toward meeting the goal set by Gov. Deval Patrick of having 250 megawatts of renewable energy by 2017," said Leewood Building owner Peter Schwarz. He said he took advantage of both state and federal incentives to offset some of the project costs and worked with local solar vendors such as Nexamp of North Andover, Mass., which installed the system, and PanelClaw, North Andover, Mass., and Solectria Renewables, Lawrence, who were among the suppliers.
The $1.5 million array will produce an estimated 400,000 kilowatt hours of electricity per yearâ€”about the same amount used by 46 average households or about 30,922 gallons of gasoline saved per year. During the array's expected lifespan over the next 25 years, 15 million pounds of the greenhouse gas carbon dioxideâ€”normally emitted by fossil fuel powered generation plantsâ€”will be offset, said Schwarz.
"I am proud to have taken my dad's 40-year-old manufacturing building and turned it into one of the region's most energy-efficient facilities. The new reflective roof, 1,166 solar panels stretched out over 54,000 s/f of the roof and related equipment are just among the latest green improvements," said Schwarz. Earlier efficiency upgrades included infrared warehouse heaters, motion sensor warehouse lighting, replacement of all larger windows, low flow bathroom fixtures and more, he explained.
The reduction in carbon dioxide made possible by the solar system during its life time is equivalent to the carbon removed from the air by 176,809 trees, emissions of 860 homes or carbon dioxide from 773,044 gallons of gasoline. Real-time monitoring of energy output and emissions offset is available on the Web at http://live.deckmonitoring.com/?id=leewood_realty.
The Leewood Building was originally built by Irving Schwarz for heavy manufacturing when rail cars visited the building each day. "However times have changed. I believed it was vital to position the property to compete in the 21st Century. In this tough economy, tenants are looking for properties that reflect their corporate values of greener, leaner and sustainable," Schwarz said.
Swix Sport, a wholly owned subsidiary of Swix Sport AS, of Oslo, Norway, relocated is North American headquarters to Haverhill from Wilmington last summer. The company is a top supplier of accessories for the winter sports industry including ski wax, ski tools, ski poles, technical apparel and accessories.
"With climate change a constant factor in our business I felt that this project was important for Swix, even after this difficult season," said Swix Sport CEO Steven Poulin. "This solar project, combined with other green features built into the Haverhill facility, are some of the primary reasons this site was selected for Swix Sport USA's relocation in the summer of 2011."
Located at 60 Newark St., the Leewood Building is a 103,000 s/f industrial facility. The building was formerly occupied by companies such as Digital Equipment, Andover Medical and Pottery Collaborative. The building is managed by Peter Schwarz of Leewood Realty LLC.
Tags:
Previous StoryNext Story
Print
PDF