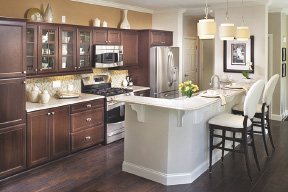 Southport in Mashpee has distinguished itself again by winning the 2013 National Gold Award for "Best Home Design in America." The National Association of Home Builders (NAHB) presented the award for Southport's "Hyannisport" model home at the 2013 International Builders Show in Las Vegas. Designed by the international award-winning firm, BSB Design in West Des Moines, Iowa, it's the second national award presented to Southport Developer Ronald Bonvie for The Hyannisport model home. In 2011, the model won a national silver award for "Best Model Merchandising."
"Winning awards is always gratifying," said Bonvie, "But to win national awards judged by professional experts in such a competitive marketplace is especially meaningful." Bonvie, a Mashpee resident for more than 20 years, is a 40-year veteran in the homebuilding industry, having built more than 1,800 homes throughout Mass., including many multi-family developments.
"Prior to starting our third and final phase of homes at Southport, we conducted extensive consumer research to determine what prospective adult buyers would like in their next home. Based on this feedback, we designed seven new homes which have been very well received in the marketplace," Bonvie said.
Southport has already sold 80% of the 750 homes in the community. "We believe that with new home prices starting in the mid $300s we offer tremendous value to buyers, especially considering the extensive amenities we provide," Bonvie said. The community has a nine-hole golf course, 32,000 s/f Village Center clubhouse, tennis courts and 24-hour manned security at the main entrance. The condominium fee, which went down in 2012, includes all exterior maintenance, landscaping, full use of the Village Center and 24-hour security.
The single-level Hyannisport design features two bedrooms including a large master suite with a master bath including a double vanity, a large walk-in closet and adjoining laundry room; an open kitchen with breakfast bar, dining and living area with fireplace, plus a deck or optional three and a half season sunroom. A second full bath adjoins the second bedroom. The spacious full basement "lower level" comes partially finished and has abundant storage space.
This national award-winning community for adults 55 and over was twice named by Where to Retire magazine as one of "America's 100 Best Master-planned Communities." Located just 20 minutes from the Sagamore and Bourne bridges, Southport is one mile west of Mashpee Commons shopping center off Rte. 151 at Old Barnstable Rd.
Southport has also received nine awards from the Builders and Remodelers Association of Greater Boston, including the Gold "PRISM" Award for "Best Active Adult Community." In 2011, the community won two National Silver Awards from NAHB for "Best Interior Merchandising for a Model" and "Best Website for a Residential Community."
Tags:
Previous StoryNext Story
Print
PDF