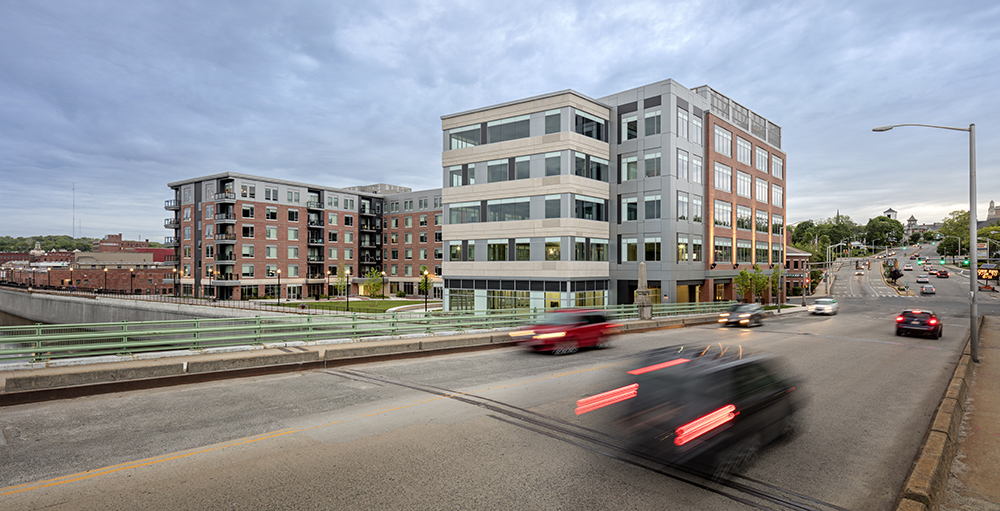 Haverhill, MA Like many smaller New England cities in the post-industrial era, Haverhill has faced a complex web of issues affecting its development and growth. The primary challenges have been growing the city’s local economy, an older building stock, and a desire for more activity in its downtown center. In addition, city officials imagined more public access to its most important resource, the Merrimack River. Other related issues include parking, physical barriers to access, and a desire for a greater feeling of safety and attractions downtown. 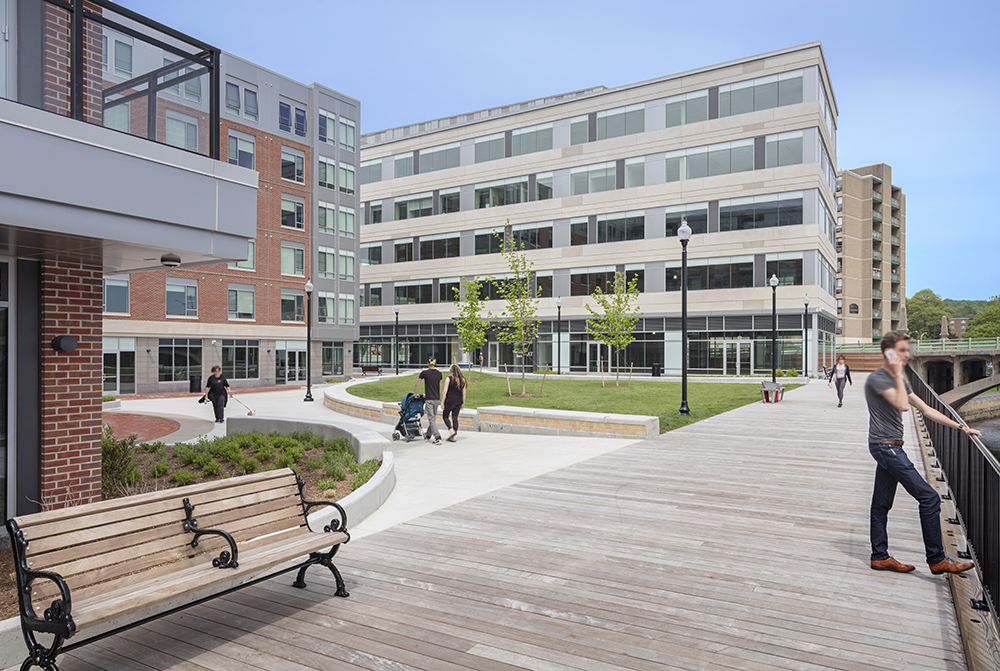 City officials reached out to the Boston chapter of the Urban Land Institute for fresh ideas, where The Architectural Team partner Mike Binette, AIA, has been a longstanding member. ULI Boston convened a Technical Assistance Panel, or TAP: These experts in the fields of development, urbanism, engineering, landscape architecture, architecture and planning donated their time to review and make recommendations for strategic development, zoning regulations, project feasibility and implementation. The top proposed solutions, Binette says, focused on the riverfront. TAT and the ULI Boston input led to a raft of new ideas for completing the downtown Riverwalk and creating new pedestrian access between its promenade and the downtown. 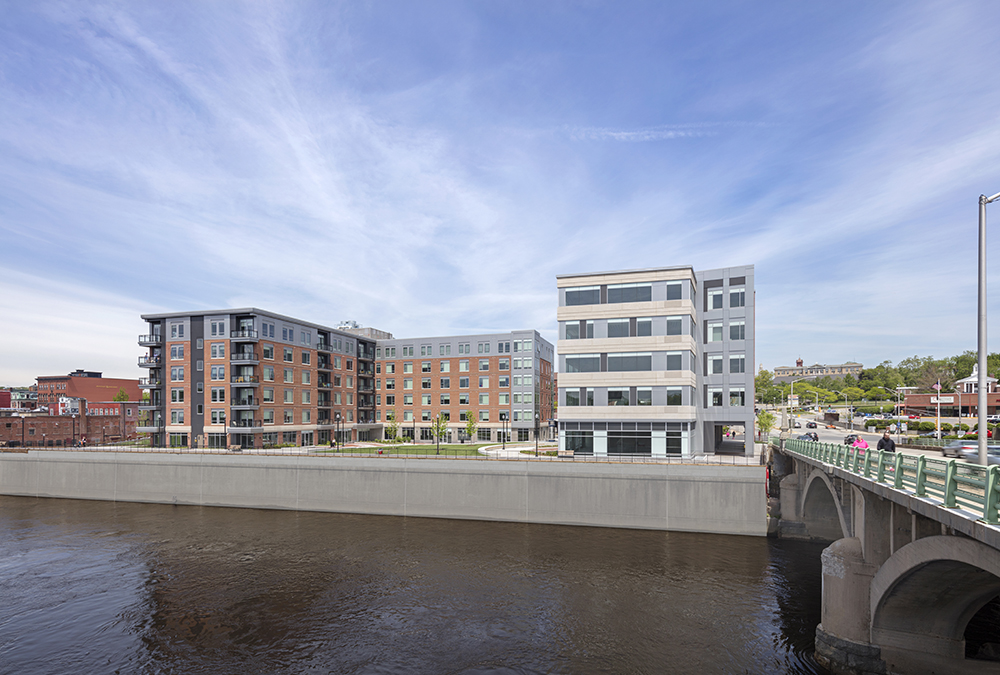 The Architectural Team already knew the city well. The firm has worked on three adaptive-reuse and historic preservation projects in the downtown area. With its riverfront site, they saw an opportunity to bring a sustained economic turnaround -- a belief shared by politicians, economists and nonprofit boosters.

For its clients–the Greater Haverhill Foundation and Planning Office for Urban Affairs–The Architectural Team proposed a cornerstone development on a critical, 1.5-acre downtown site where Main St. and Merrimack St. intersect just north of the river. In that spot, the city’s Woolworth Building had stood vacant for decades. In its place, the architects envisaged a multi-phase, mixed-use complex with two mid-rise buildings on a raised podium, with a plaza and pedestrian connections to the riverfront. The team’s program included two mixed-use buildings:

• A five-story, 58,000 s/f commercial building with commercial and retail storefront, as well as a University of Massachusetts satellite campus space on the second and third floors, and office space above.

• A six-story, 118,000 s/f building with riverfront restaurants, commercial uses, and 80 residential units above. 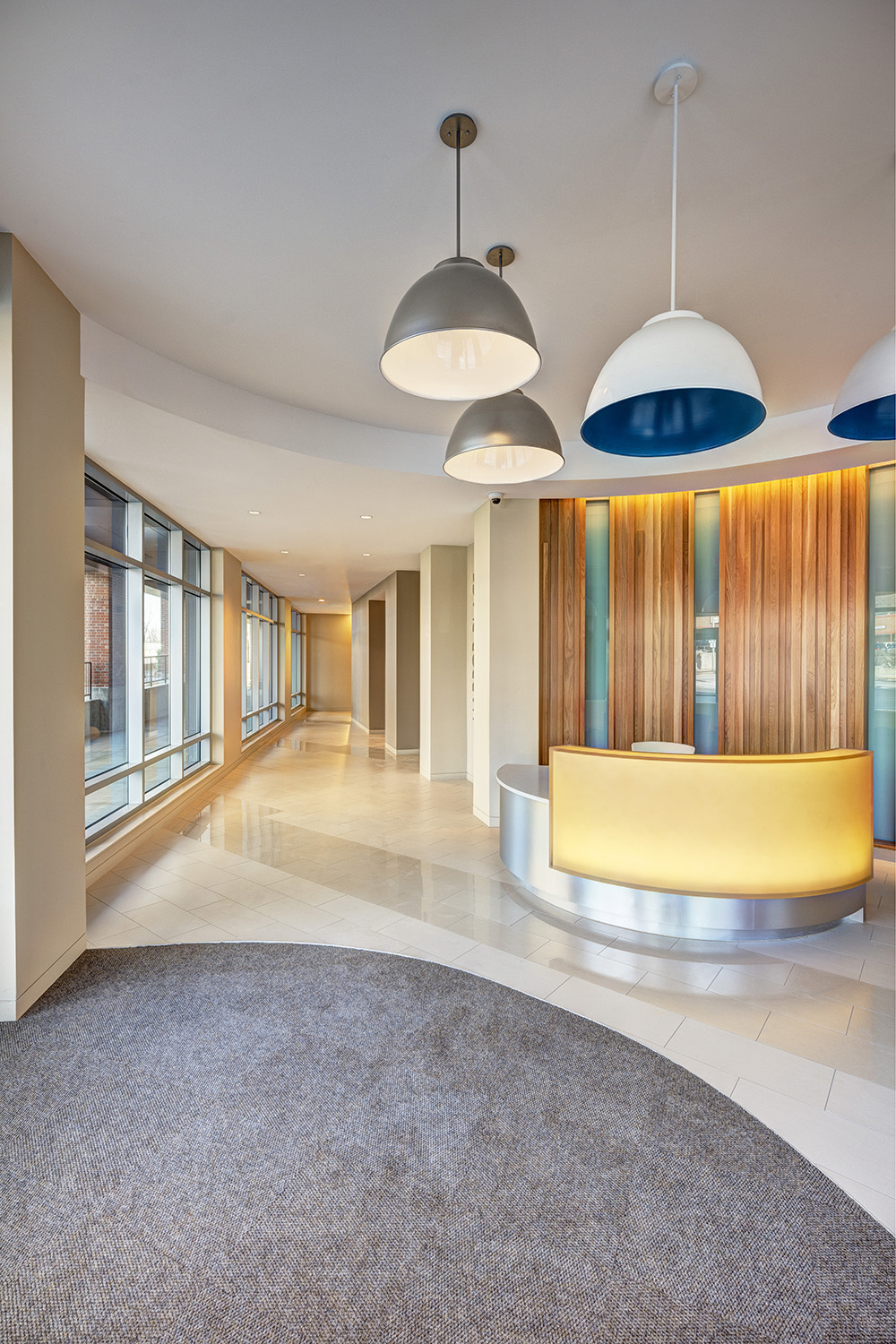 Called Harbor Place, the mixed-use complex opened this spring to much fanfare. It creates active pedestrian corridors around the development and leading to the Merrimack River. More than just a building solution, the transit-oriented development, or TOD, has injected new life into the area, with 176,000 s/f of housing, office, retail, commercial and restaurant space as well as students and faculty from the UMass-Lowell community.

A nexus for economic and cultural activity, Harbor Place is designed to help reinvigorate downtown economically and effectively replacing the loss of manufacturing jobs in recent decades. Harbor Place also helps reconnect the community to the waterfront, and it brings together different community areas and residents to each other. Stakeholders anticipate that the adjacent recreational boat dock facility (with ocean access) will further enhance the waterfront site in the future.

“This has led to a transformational, lifestyle-changing development,” said Lisa Alberghini, president of the Planning Office for Urban Affairs, which has built more than 30 residential and commercial projects in the state. “It’s a game-changer for downtown Haverhill and it’s already helping to make the river area come alive. We’ve also seen how this major project is triggering additional investment up and down the river.”

Leaders in the community agree. U.S. congresswoman Niki Tsongas, who represents the area, said, “During the Industrial Revolution, our region’s gateway cities like Haverhill led the way in powering American innovation. Today, they are continuing that tradition by reinventing themselves to develop new educational, cultural and economic opportunities. Haverhill’s distinctive assets, particularly its extensive waterfront along the Merrimack River, will help spark this new series of economic development projects, which will benefit and impact the city going forward.”

“Harbor Place is a transformative plan,” said then-state representative Brian Dempsey at the project’s topping-out ceremony in 2015, “that combines commercial, educational and cultural aspects that will change the downtown landscape while promoting one of our city’s greatest resources in providing access to the Merrimack River.”