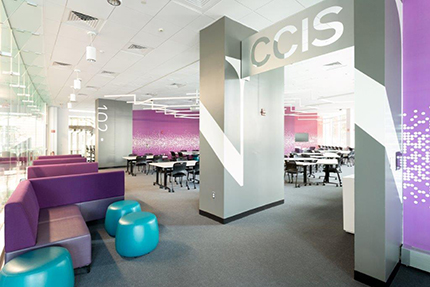 Boston, MA Acella Construction Corp. completed a project at Northeastern University that included creation of conference rooms and a new digital laboratory for the university’s College of Computer and Information Science (CCIS) at 440 Huntington Ave.

The construction project encompassed design and creation of four new conference rooms with an operable partition dividing two of the rooms to allow for a larger meeting area, when necessary.

Project scope also included creation of a new digital laboratory with a new layout and furniture plan to allow the university’s CCIS to increase the occupancy load of the space.  The conference rooms and digital lab are outfitted with cutting edge technology, interactive audio-visual and lighting scenes and designed with modular furniture to accommodate the expanding needs of the diverse groups and uses within the area.

The project schedule proved to be challenging due to the lead time of materials required for the project.  Custom light fixtures – which typically take 8 to 12 weeks to procure – and a Lutron control system had to be installed and tied into the fire alarm system prior to final inspections and testing.

In addition, during the demolition phase of the project, power feeding a major server room was discovered in an existing wall that was specified to come down.  The server room housed many years of the University’s research; as such, it was necessary to reroute the power to the server while maintaining power at the units.

Ultimately, Acella Construction was able to meet a short three-month completion timetable, despite the project’s many challenges.

“We’re pleased with the end result of a project that was not without its challenges,” said Dave Dirubbo, president of Acella Construction. “But with careful planning we were able to maintain the original schedule and provide expanded space that should suit the CCIS’s needs for years to come.”