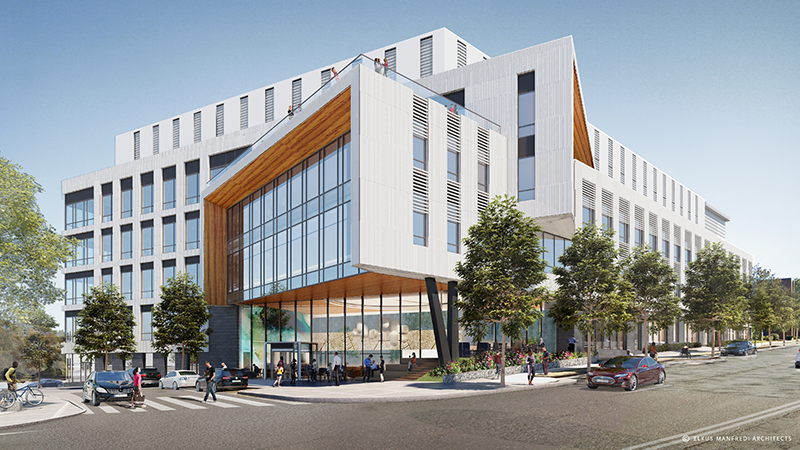 BDG plans to build a major life science campus comprised of two phases totaling nearly 450,000 s/f of class A office/R&D lab. Their proposal addresses the goals outlined in The Watertown Comprehensive Plan, and builds upon the burgeoning life science cluster in the city that has evolved and accelerated over the last several years.

Seeking to capitalize on market conditions, BDG assembled several parcels along Galen St. which was previously seen as a blighted, autocentric strip of abandoned buildings and vacant land. This project will help improve the traffic and bus circulation and provide an iconic building which will enhance the entrance into Watertown Sq. When combined with BDG’s owned property at 51 Water St., the entire site totals in excess of five acres of prime developable land at the confluence of Watertown Sq. and the Charles River.

Designed by Elkus Manfredi Architects, BDG’s phase 1 plan features just over 200,000 s/f of LEED Gold certifiable office and lab surrounded by 44,000 s/f of open and green space (40%). Landscape architecture firm Ground is designing a pair of parks that will provide tenants, visitors, and neighbors a place to pause and recharge amid lush plantings and distinct seating pockets. In addition to the new parks, the development will transform vehicular, bicycle and pedestrian flow by adding new traffic patterns and networks. The building will also feature 277 on-site, below-grade parking spaces, a spacious bicycle room, and solar panels on the roof. The improved traffic flow will promote multi-modal transportation, supported by a new bus stop and Blue Bikes station. Coupled with new wide sidewalks, streetlights, extensive tree plantings and the elimination of seven curb cuts, these improvements will enhance pedestrian streetscapes and connections to Watertown Sq. and the Charles River.

The project is expected to break ground in early-2021.

“We are pleased with the decision by the ZBA last evening and thank all of the residents and city officials who have participated in this process,” said Jodie Zussman, president, BDG and the second generation of the firm at the helm.

Bob Doherty, a VP and partner in the proposed development said, “We are excited to realize the city’s vision for the South Sq./ Galen St. corridor as a major gateway into the downtown. This part of Watertown is an ideal place for a mix of uses including office/ R&D, lab and other higher density, transit-oriented development that would serve to transform its character and identity.”