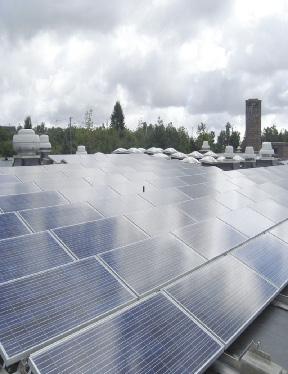 Broadway Renewable Strategies provided engineering, procurement, construction and financing of each of the four PV systems. The NECA contractor will also own and maintain the solar systems. Broadway provided equipment and services in a Solar Power Purchase agreement with the town. The town has no capital investment in the system. Broadway will furnish these town facilities with solar-generated electricity at a defined, significantly discounted per kWh rate, helping the town reap the significant energy savings and protect the town's budget from future volatile energy prices.

Broadway supervised four field crews comprised of a total of 17 licensed IBEW electricians - a project executive and 4 project foremen based out of IBEW Local 103 and 12 licensed journeymen wire men from IBEW Local 96 in Worcester.

Town officials commended the NECA contractor in the firm's neat and orderly workmanship. The projects were constructed with minimal disruption to the schools' daily schedules.

Each of the schools will utilize the solar installations as an educational tool in their science curriculum. Students will have the advantage of hands-on learning through monitoring the energy output of the solar panels, and Leicester will serve as a leading Mass. community in the growing trend toward clean, renewable energy.

Broadway executive project manager Dan Griffin said, "Student involvement on the Leicester project makes it a very gratifying project for Broadway Renewable Strategies to complete. The project will bring to the town in clean energy cost savings and plus provide an active on-site solar system as a learning platform."