Company of the Month: MGM Resorts teams with Davenport to create dynamic retail/entertainment district in Springfield 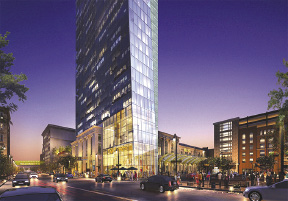 In June 2011, a tornado touched down in the heart of Springfield, Mass. devastating three historic city blocks. In the same year, Governor Deval Patrick approved gaming legislation aimed at revitalizing a struggling economy. The confluence of these events resulted in MGM Resorts International's selection of Main St., Springfield for its "Massachusetts" gaming bid. The chairman of MGM, Jim Murren, grew up in nearby Connecticut. MGM's president, Bill Hornbuckle, moved to Springfield as a child. Both have recollections of vibrant shops, restaurants, and a fondly remembered era. In partnership with Springfield, both see opportunity to support revitalization inspired by that grand past.
MGM is a Fortune 500 company with renowned resort properties in the United States, China, and Dubai. The company, known throughout the world for hospitality, entertainment, dining and gaming hopes to bring its unique vision and a renewed vitality to the heart of Springfield. In collaboration with Charles Irving of Davenport Companies, MGM is creating a Springfield retail/entertainment vision unlike any other gaming facility. Immediately located adjacent to I-91, the project brings parking, retail, restaurants, and entertainment back to New England's fourth largest city. Unlike the typical "casino in a box," MGM Springfield is outward facing with stores, restaurants, and apartments open to Main St. This unique vision provides positive experiences for all ages. The resort features a 250-room hotel, boutique spa, gaming, 113,000 s/f of retail/restaurants, bowling, and a luxury movie theater. Dining offerings include Lydia Shire, Ken Oringer and Wolfgang Puck. In keeping with the project's theme of "live, work, and play" the approximate $800 million development also includes office space, day care, market rate apartments, and a trolley system connecting many of this city's iconic attractions such as the Basketball Hall of Fame.
The focal point of MGM Springfield is a vibrant "entertainment district" set against the backdrop of the historic Springfield Armory. The Armory, partially destroyed by the 2011 tornado, symbolizes MGM's commitment to the city and its past. The "district" features a plaza area for events and concerts that is easily transformed for exhibitions, art shows and local functions. Anchor tenants within the district include a high-end bowling complex, luxury movie theater, and the Nine Fine Irishmen Pub. Unique to western Massachusetts, the theater has reserved seating and dining. Supporting every venue is a 3,000 car garage, directly accessible from I-91 and free to all customers. Over 100,000 cars per day pass by on Interstate 91 and MGM visitor projections exceed 27,000 per day.
MGM Springfield pledges its design to complement and enhance existing Springfield businesses and attractions. As part of this commitment, MGM is working in collaboration with institutions such as the MassMutual Center, Symphony Hall, and City Stage. Leveraging off its international entertainment portfolio, MGM is committed to drive unique events to these treasured venues. Acts range from concerts, to comedy, to Cirque du Soleil. In 2016, Springfield transforms to a 24/7 city with destination entertainment, dining, and accommodations on par with Boston and New York.
Timeline
MGM Springfield competes with three other gaming operators for the lone gaming license allocated to the four western Massachusetts counties. It is anticipated the Massachusetts gaming commission will award the license in 2014. If successful, MGM anticipates completion of the project by 2016.
Development Partner
MGM Springfield is partnering with Davenport to lead development of the entertainment, retail, and office components of MGM Springfield. Davenport is based in Massachusetts and specializes in development, management and repositioning of commercial real estate. Davenport manages, owns, and advises 95 retail properties between Washington D.C. and Boston.
Davenport's efforts for MGM Springfield are led by Chuck Irving. Irving has 25 years of commercial real estate experience and has participated in the acquisition, development and redevelopment of over 50 commercial properties within the Washington D.C./Boston corridor. In the western Massachusetts area, Irving has been part of the successful development of projects in Springfield, Sturbridge, Ware, East Springfield, Hadley, Pittsfield, Westfield and Windsor, Connecticut.
Tags:
Previous StoryNext Story
Print
PDF