Earlier last month, our community had the pleasure of joining local businessman Dave Cesario and his team to celebrate the grand opening of a new location for Dave’s Fresh Marketplace, at 2574 West Shore Rd.  Dave’s Marketplace is truly a Warwick success story: more than 50 years ago, Mr. Cesario started his business with a small fruit stand – then called Dave’s Fruitland – on West Shore Rd., not far from the new location. From these modest beginnings, Mr. Cesario worked hard and eventually expanded his company to become the largest independent grocery chain in the state, now with ten locations throughout Rhode Island.

Relocating the flagship store known as “Lil Dave’s” to its new home just up the street afforded the company the ability to triple the store’s size and add 75 new employees to its workforce. “Lil Dave’s” has been a longtime neighborhood favorite, so in the design of the new location, Dave’s made sure to keep the same sense of nostalgia, smaller aisles, and ability to provide customer-friendly service. Signage in the store references the history of the company and of Warwick – a sign for Dave’s Fruitland in the produce department, a nod to how the company started out; a deli sign references Rocky Point; Oakland Beach is highlighted in the seafood department as an homage to Warwick’s rich fishing history; and more.

I am proud that Dave’s Fresh Marketplace has been a vibrant and vital part of our business community and our city for more than half a century. Dave and his hardworking team have earned a reputation for giving customers a good value, great products, and treating everyone who enters their stores – customers and employees alike – as family. 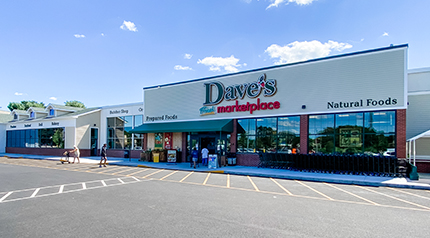 The company’s commitment isn’t just to its employees and customers, however. Just last year, Dave’s Fresh Marketplace donated 20 tons of food to the Rhode Island Community Food Bank and local food pantries, and also gives monetary contributions to non-profit agencies and numerous other causes. Dave’s employees themselves contributed more than 500 hours of community service last year. Dave’s Fresh Marketplace also invests in its employees – the company has awarded more than $125,000 in scholarships through its Employee Scholarship Program – and that’s just over the past five years. Our community is grateful to Dave’s for its continued investment in Warwick.

The new market is just part of the 26.5-acre parcel known as the “former Benny’s plaza” (in Rhode Island parlance). A 6,500 s/f addition to the Dave’s building is slated for a future retail use, and brings the footprint to just over 39,000 s/f. The property owners have also received Planning Board Master Plan approval for the construction of two new, free-standing buildings, totaling 8,600 s/f, on the property. Future tenants are expected to include a bank and restaurant, as well as other retail uses.

We congratulate Mr. Cesario and his team on this exciting milestone, and look forward to welcoming even more new businesses to the site in the near future.

Joseph Solomon is the mayor of the city of Warwick, R.I.

Trending Stories
This week's columnist:
Building during a pandemic and the potential pitfalls - by Ronald Ciotti & Lindsey Peterson