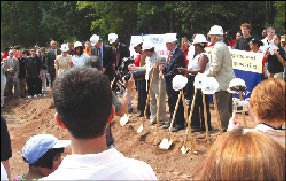 Officials from The University of Hartford, the city of Hartford, the state of Connecticut, and the Hartford Public Schools, including around 400 students, witnessed the ground breaking ceremony for the University High School of Science and Engineering (UHSSE) on August 31st. The 82,000 s/f building will be home to high school students in January 2008 when the building is scheduled to open.
The $28 million facility, located on Mark Twain Dr. Extension, was designed by JCJ Architecture. The Pike Company is serving as the construction manager of the project. The UHSSE is a partnership of the University of Hartford and the Hartford Public Schools. The science and engineering infused magnet program prepares graduates for pursuing further education and careers in a range of scientific, engineering and technology fields.
Hartford mayor Eddie Perez said, "We're not just laying a foundation for a new building, we're laying an educational foundation for our children's and our City's future." As part of the goal to spark economic development in the city, mayor Perez and the Hartford School Building Committee have incorporated an aggressive set aside program for Minority and Women-Based Enterprises (MWBE) into the Hartford School Construction Program.
Diggs Construction, that serves as the program manager of the HSCP, has managed over $228 million worth of construction for the HSBC to date. Over 25% of the total construction contracts, or $60 million, have been awarded to MWBEs.
"The mayor and the Hartford school board have implemented a program that has not only helped the children of Hartford, but it has also been an overall boon for the community of Hartford." said Dale Diggs Jr. president of Diggs.
Tags:
Previous StoryNext Story
Print
PDF