E.M. Duggan Inc. rich in history mavericks in the industry

Canton, MA Sophisticated, efficient, committed, cutting edge and mavericks are just some of the words, industry, union and political leaders use to describe E.M. Duggan. In 2016 the fifth generation family run Massachusetts company turned 125 years old. Today they work out of three properties in Canton, and in 2014 they opened a special projects division in downtown Boston. E.M. Duggan has more than 400 employees with union members from Local 537, Local12, and Local 550.

In the 1980’s president, CEO and CFO Vincent Petroni took over the reins and with the help of past and present leaders he grew Duggan from a $2-3 million company to $170 million in 2015. 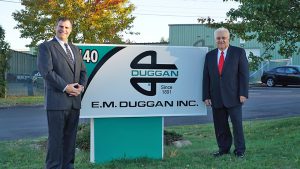 Shown (from left) are: Leonard Monfredo and Vincent Petroni

In 2009 his son-in-law, Leonard Monfredo now executive vice president joined the company. The dynamic duo represent the fourth and fifth generation of family ownership. “The core of EM Duggan has always been to make everyone feel like part of the family. We employ both union and non-union workers and it’s important to both Vin and me to carry out that legacy, that everyone is a part of the team,” said Monfredo.

Duggan credits their loyal employees for allowing them to grow and currently work on major construction projects in Boston like the Millennium Tower, Element and Aloft hotels, Water Mark Seaport and the Harvard Dunster House.

“I just think that they pay attention to the culture. If you look at some of the things that they’ve done here, just as far as making the guys comfortable, the safety, the lighting, they’ve put a lot of thought into what they do and they’re always thinking ahead,” said Plumbers Local 12 business manager Harry Brett.

“They’re fantastic; total class operation,” said Local 537 business manager, Leo Fahey. “Professionalism from the ownership, down to management, down to the foremen, down to the men in the field. They all care, they all get along great.”

“EM Duggan is a great company and we’re happy to have them, and wish we had more companies just like them,” said Mark Fortune, business manager of Local 550.

E.M. Duggan has left an indelible mark on the hundreds of high rises, hotels, hospitals, sporting arenas, schools and condos they have helped build and continue to maintain with their world class mechanical service department and special projects group.

Forward thinking is also a big reason EM Duggan has grown into a major player in their industry and why they continue to flourish. In the early fifties Edward Duggan II created one of the very first plumbing prefab shops in New England. Today, spanning more than two football fields they currently have both an HVAC and plumbing prefab shop.

In 2014, in just ninety days, they created a state of the art 60,000 s/f plumbing prefab shop and warehouse. Currently they are upgrading their three year old thirty-six thousand square foot HVAC prefab shop to make it even safer, more efficient and user friendly for their employees.

“Constantly raising the bar is another reason for EM Duggan’s huge success.” states Monfredo. “As a team we are constantly trying to be better, do better to continuously change our processes, technology and equipment to make the construction community safer and to give our clients a higher quality product in an efficient manner.”