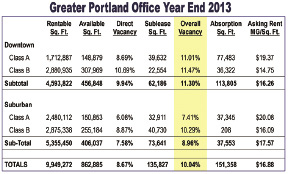 I recently presented findings and analysis of our 21st Greater Portland Office Market Survey at the Maine Real Estate & Development Association (MEREDA) conference held January 23rd.
A trend continues in the Greater Portland, Maine office market, with 2013 posting a 2nd consecutive year of positive results in both downtown and suburban markets.
* Overall vacancy declined by nearly a full point, down to 10.04% and nearly three full points below the peak of 12.92% just two years ago
* Net absorption was positive for a 3rd consecutive year, up by 151,358 s/f or 1.52% - the largest single-year increase since 2005
* Leasing activity is up by 1.5%, a 6th consecutive positive year, with an average annual increase of 6.45% since the low in 2007
* Asking rental rates on a weighted average basis were up sharply for the year, increasing by 4% across all class A&B sectors both downtown and suburban
* Sales activity remains sparse in the office market, with the supply of available investment properties limited and demand still decidedly high
Downtown
Downtown Portland results were sharply positive for a second straight year, with overall vacancy of 11.3% and positive net absorption of 113,805 s/f or 2.48%. In the past two years alone the downtown market has witnessed a drop in overall vacancy by over 5% and a corresponding increase in net absorption by a total of 190,000 s/f or 4.1%. Asking rents over that same period have declined some, a likely contributor to the strong results. The only notable downtown sale in 2013 was the 10-story, class B tower at 465 Congress St.
Suburban
Suburban results were not as strong as downtown, but still favorable for the year. Overall vacancy was even with 2012 at 8.96% (noticeably below the 5-year average of 9.95%) and net absorption was positive by 37,553 s/f or .70%. On the plus side for landlords, asking rental rates spiked by 8.25% in the class A sector and by 8.6% in class B. There were two notable sales - 70 Gray Rd., Falmouth (class A investor sale, fully leased to TDBank) and 340 County Rd., Westbrook (class B owner-user purchase by Husson College).
Old Port
Of note, Portland's Old Port continued to be a draw for office users in 2013, where the vacancy rate dropped nearly 3 percentage points from 2012's level to end the year at 10.3%. More particularly, vacancy in the Commercial St. corridor fell another Â½ point in 2013, down to 8.21%. Commercial St. continues to be popular with retailers and office users and is a vibrant segment within Portland's Old Port.
You may go to malonecb.com to download a copy of the full survey.
Jim Harnden is partner and broker with Malone Commercial Brokers, Portland, Me.
Tags:
Previous StoryNext Story
Print
PDF