The strong office market throughout Greater Portland continued in 2018 as vacancy rates fell for the ninth consecutive year. A survey of 347 Class A and Class B office buildings, totaling just over 12.4 million s/f, in seven submarkets, found that the total vacancy rate, including sublease space, fell to 4.18%, down from 4.4% in 2017 and the lowest rate since 2000. Four out of the seven submarkets had a drop in vacancy with the remaining three showing little increase. Several large transactions shaped the majority of the movement in most submarkets, and the popularity of downtown Portland continues. 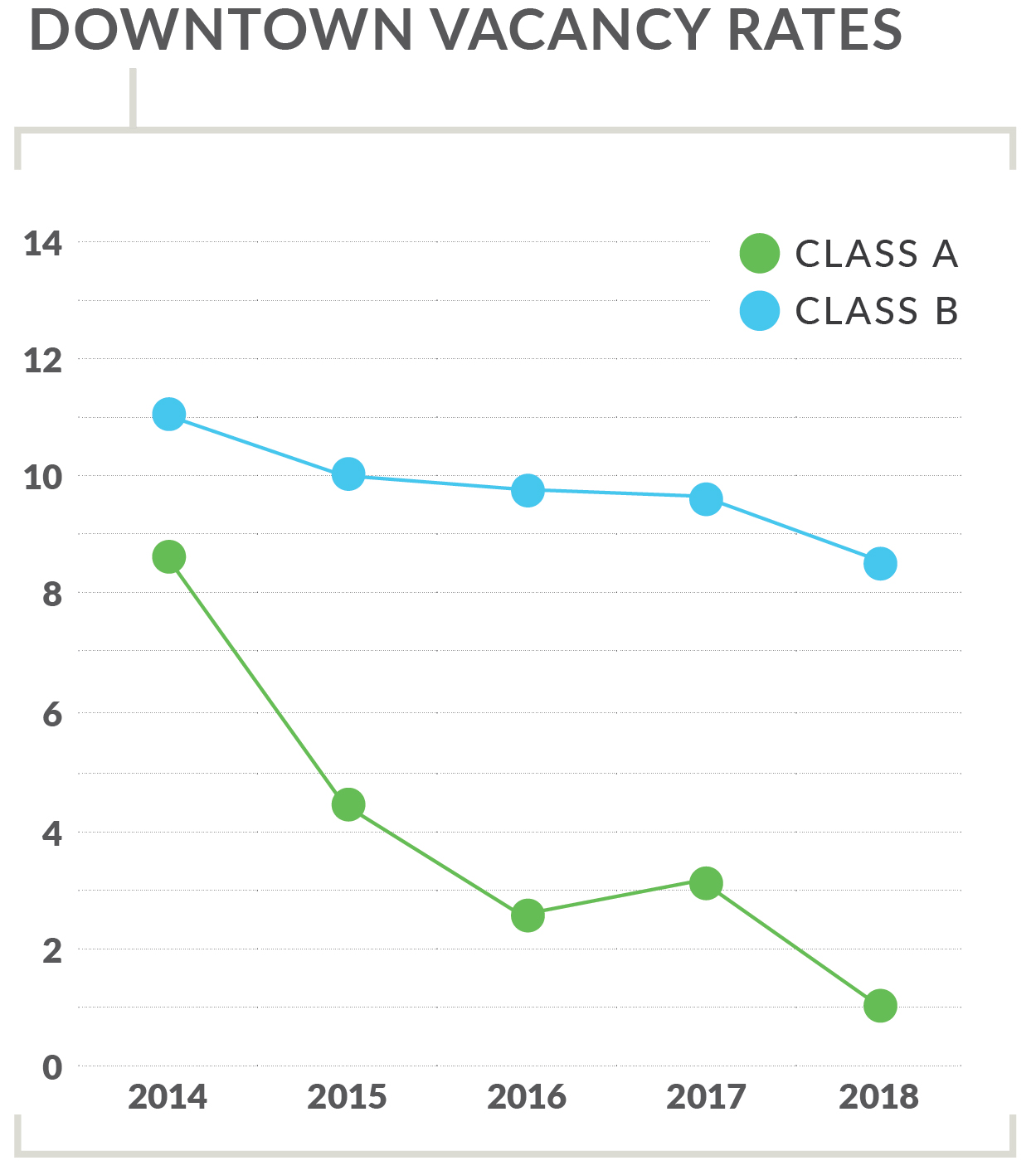 Downtown
After a slight increase in the 2017 vacancy rates for the downtown submarket, totaling almost 4.4 million s/f, there was a significant decrease to a direct rate of 4.9%, down from 6.76% the year before. Options remained extremely limited for companies seeking Class A space. With available space in only five Class A downtown buildings, totaling 22,000 s/f and no vacancies over 6,000 s/f, Portland’s Class A vacancy rate has gone down to 1.04%. WEX’s new headquarters at 0 Hancock St. increased the Class A space in 2018 by 100,000 s/f however this had little to no effect on the overall market and resulted in direct positive net absorption. Additional buildings are slated to be added over the next few years, which will continue to increase downtown market size and meet the demand from growing companies.

Surprisingly, the Class B office market vacancy rate dropped from 9.85% in 2017 to 8.59%, even though overall transaction activity continued to be light. While this drop is impressive, it’s misleading, as it can mainly be attributed to the sale of 477 Congress St. Once a large hindrance due to its low occupancy the 150,000 s/f building—historically known as the Time and Temperature Building—made up roughly 6% of the Class B market space has been removed from our survey. In it’s current configuration, future plans for the Time and Temp do not specifically include office space. In addition, 50 Monument Sq., a 36,000 s/f Class B building, sold last spring and the three vacant floors totaling 18,000 s/f are being converted to apartments. Despite 477 Congress being removed from the survey, the majority of Class B vacancies were concentrated in the Monument Sq. area, while smaller buildings in the Old Port are in higher demand, albeit at higher asking lease rates. 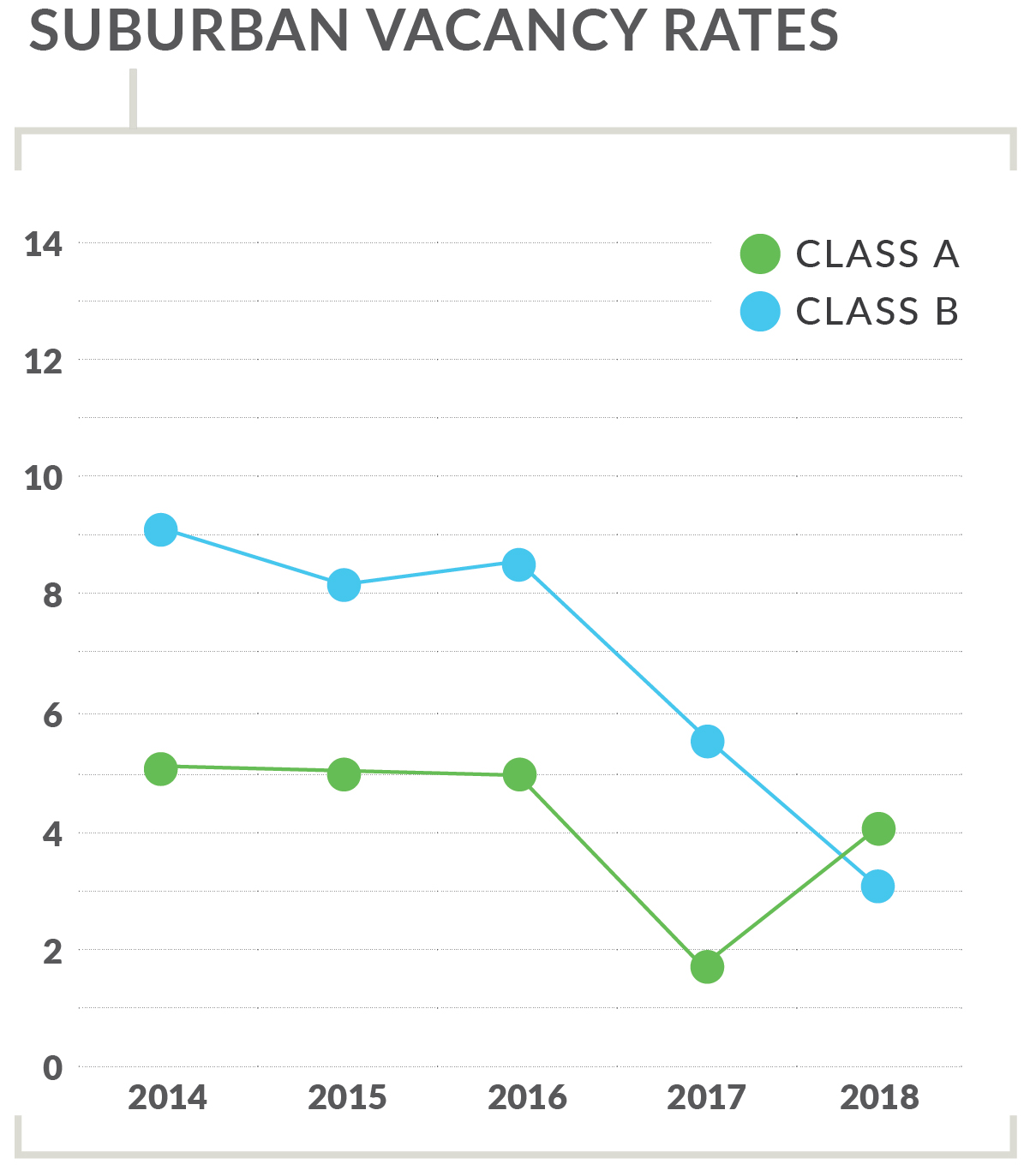 Suburban
The suburban market, made up of several submarkets including Suburban Portland, Falmouth/Cumberland Yarmouth, Westbrook, Maine Mall Area, and Scarborough/South Portland, increased slightly to a direct rate of 3.76% after a sharp decline in 2017. Despite the increase, the rate remains much lower than prior years which can be largely attributed to two large vacancies. At two Delorme Dr. in Yarmouth, 52,000 s/f of warehouse space has been transformed to Class A office space, yet to be leased. This building represents the predominant driver for the increase in the overall Class A market, up to 4.09%. In addition, Bottomline Technologies vacated 34,500 s/f at 65 Gannet Dr. in South Portland and relocated to 13,000 s/f at 75 John Roberts Rd. resulting in 21,282 s/f of negative absorption. The Class B vacancy rate dropped slightly to 3.17%, even with a 48,000 s/f vacancy at Two Davis Farm Rd. in Portland, which attests to the activity in spaces under 10,000 s/f in the Class B market in 2018. 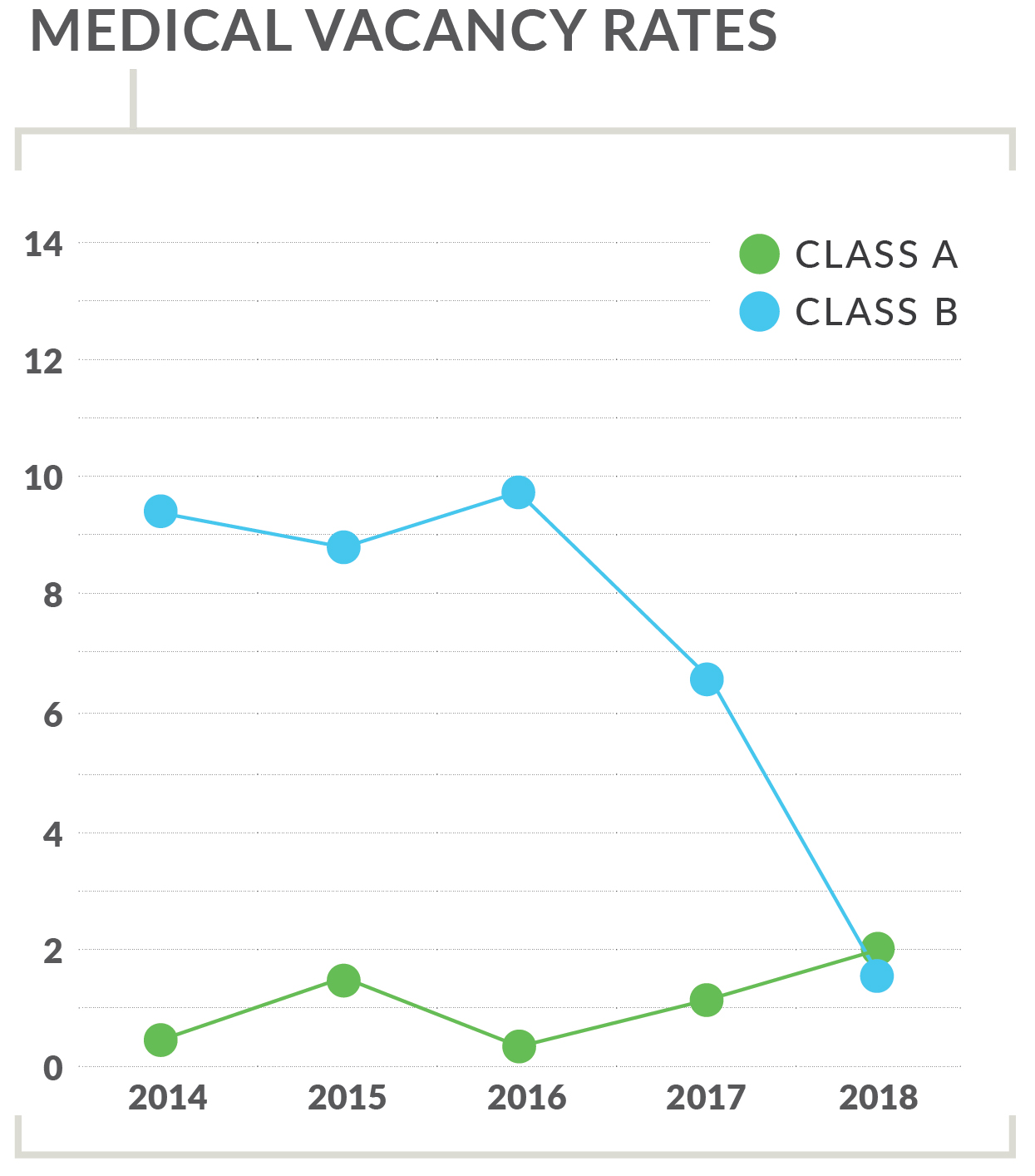 Medical
Over the past several years the medical office vacancy rate has steadily declined, however in 2018 there was a slight uptick to 3.76% for both Class A and Class B buildings. While not a significant increase it is interesting that Class A rates increased three percentage points to 4.09%, while the Class B rate fell three percentage points to 2.48%. In recent years some of the largest suburban office leases were by medical-related companies or Class B office buildings being retrofitted to medical office space. This trend continued in 2018 with Maine Health master-leasing 222 St. John St., eliminating about 19,000 s/f of vacancy from the suburban Portland Class B market. Several projects are in the pipeline for 2019, when medical-related transactions will again shape the Greater Portland office market.

Nate Stevens is a broker with The Boulos Co., Portland, ME.