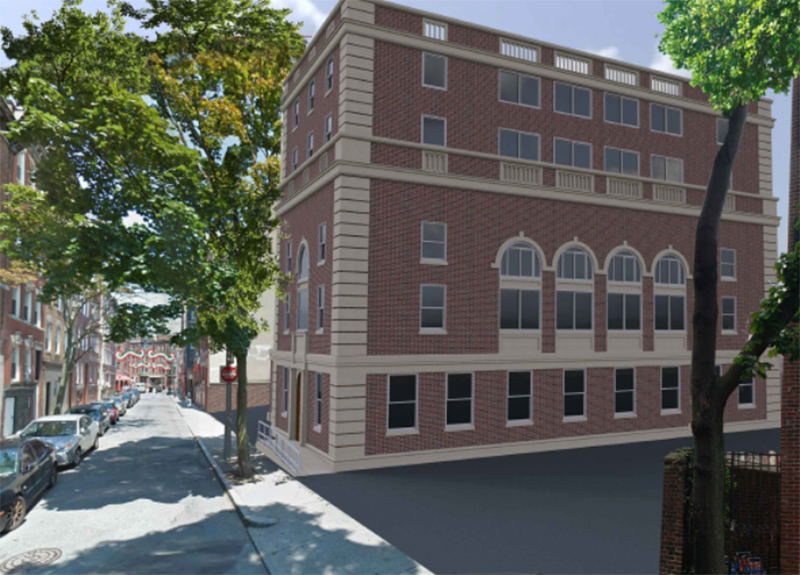 Boston, MA MassDevelopment has issued a $6.4 million tax-exempt bond on behalf of 41 N. Margin Senior Apartments, LLC, an affiliate of East Boston Community Development Corporation (EBCDC) and Affirmative Investments, Inc., which is using bond proceeds to receive a 99-year lease from Ausonia Home Association for a portion of its property at 41 N. Margin St. in the North End. EBCDC and Affirmative Investments are also using bond proceeds to convert the property, which has been vacant for two years and was previously the headquarters for the Ausonia Council 1513, Knights of Columbus, into the Knights of Columbus Apartments that will feature 23 one-bedroom units of affordable senior housing to be rented to households earning no more than 60% of the area median income. The project includes renovating the building, adding two floors where the housing units will be located, and constructing a 1,600 s/f addition that will serve as the new quarters for Ausonia Council 1513, Knights of Columbus. Eastern Bank purchased the bond.

“MassDevelopment is proud to help bring affordable senior housing to one of the most historic neighborhoods in Boston, through East Boston CDC and Affirmative Investments, Inc.,” said MassDevelopment president and CEO Dan Rivera. “The Knights of Columbus headquarters played such an important role in the life of the neighborhood so we are honored and excited to see the property continue its legacy as a safe and affordable home for many area seniors.”

“This project will help to create much needed affordable senior housing in the heart of Boston’s North End,” said Pamela Feingold, senior vice president and head of community development lending at Eastern Bank. “Eastern Bank is proud to provide the construction and permanent financing for this project, and we thank MassDevelopment and the entire group of funders for expanding secure and stable housing to the elderly.”

In addition to the tax-exempt bonds, MassDevelopment assisted the Massachusetts Department of Housing and Community Development with the approval of federal low-income housing tax credits, which will provide approximately $4.7 million in equity for the project.

“The members of Ausonia Council 1513, Knights of Columbus, are excited to work with East Boston CDC, Affirmative Investments, and state and city governments to provide 23 affordable, elderly apartments to give residents an opportunity to remain in the neighborhood,” said John Pagliuca, Grand Knight of Ausonia Council 1513, Knights of Columbus. “We believe that using Ausonia Home Association’s property to address the shortage of affordable housing in the North End fulfills our charitable mission to improve the quality of life for people in need.”

EBCDC is a nonprofit community development corporation dedicated to enhancing the life of low-income residents of East Boston through community services such as elderly housing, affordable and accessible housing, economic development programs, and support for residents of public housing facilities. EBCDC has developed or co-developed more than 1,000 units of subsidized housing and manages 700 subsidized rental apartments.

“EBCDC, AI, the Knights of Columbus, MassDevelopment and the City of Boston have, once again, formed an exciting partnership that will result in affordable housing that will create an opportunity for those senior citizens who have long ties to the North End to remain in the community,” said EBCDC president Albert Caldarelli.

Affirmative Investments, Inc. partners with mission-driven organizations by contributing its real estate finance and development expertise to expand housing opportunities and deliver critical services in low-income communities. Since its founding in 1984, Affirmative Investments has facilitated the financing and development of $921 million of affordable housing nationwide, representing more than 6,200 units and 81 New Markets Tax Credit deals totaling 4.5 million square feet of space with development costs of $2 billion.

“We are so pleased to move forward with this exciting project for the North End community and cannot thank the Knights of Columbus enough for their generosity and vision,” said Affirmative Investments president David Ennis. “And MassDevelopment is a great and supportive partner.”