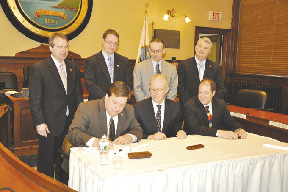 Mayor Thomas Koch and Street-Works Development, LLC signed a $1.2 billion Quincy Center redevelopment agreement that is expected to create 10,000 jobs and reshape how urban renewal projects are executed in Mass.
The agreement signed by mayor Koch and Street-Works founding partner Kenneth Narva formalizes a first-of-its-kind partnership between a municipality and private developer in Mass. and sets in motion the largest private investment in the city's history.
The project will create 4,100 construction jobs and 5,700 permanent jobs as part of a new mixed-use downtown that includes more than 1 million s/f of office space, 700 housing units, two hotels, a cinema and entertainment complex, and 575,000 s/f of retail and restaurant space.
At the heart of the master agreement is a financing mechanism that will require revenue from the new private development to pay for $227 million in public infrastructure costs, a wholesale reversal of traditional urban redevelopment by requiring the private investment to come first.
The mechanism, called the "purchase model," largely eliminates the public risk often associated with redevelopment projects: The city will purchase the public infrastructure - including parking garages - from Street-Works only when new buildings are occupied and producing enough revenue to cover the city's debt costs.
The Koch administration and Street-Works spent nearly three years negotiating the terms of the agreement with legal and financial teams that included a number of the most experienced land-use lawyers in Massachusetts. The Quincy City Council voted to authorize mayor Koch to sign the agreement and the related financial package in late December.
It will be the first large-scale development project in Mass. to use the framework, officials said.
"The partnership formalized today sets the stage for unprecedented levels of private investment and job creation, guarantees the long-term vitality our downtown, and will solidify our great city's position as an economic leader in the Commonwealth," said mayor Koch. "Most importantly, our taxpayers are protected by the unique structure of the agreement. The financing is entirely project-based, and we do not borrow a dime to pay for infrastructure improvements until the private development is built and generating revenue."
The recent signing triggers the next phase of the project, which will focus largely on local, state permitting, formal designs, and private leasing of prospective new buildings. The partnership believes the first new private development could begin in 2013.
"We are very proud of what this day represents in this process," said Ken Narva, co-founder and managing partner of Street-Works, "This is a major milestone in bringing the new Quincy Center to reality. We are focused on working with the city, the community and addressing the tasks ahead."
In addition to the $227 million in public infrastructure improvements paid for first by Street-Works and later financed by the city through new taxes and parking and revenue, the city and Street-Works are working together to secure an additional $50 million in state and federal grant funds for a portion of the improvements.
Under the agreement signed, called a Land Disposition Agreement, Street-Works will pay the city $30 million to cover downtown-related debt already incurred through construction of the Quincy Center Concourse and other related redevelopment costs.
The agreement includes firm benchmarks in which Street-Works must show that buildings are leased and occupied and adequate revenue is flowing, before the city is obligated to pay for the public improvements.
Under the plan, the city will use a state urban redevelopment law known as Chapter 121A as the property tax structure for the development. After development, the city expects to receive $10.1 million in property tax revenue. Of that, $6.8 million will go toward paying for the public improvements, and $3.6 million will come straight to the city's general fund.
Other new revenues such as new meals taxes, hotel room taxes and property taxes outside the immediate project area are expected to generate at least a total of $7.1 million in new revenue beyond what will be used to pay for the public improvements. In the end, the agreement will mean a 4 to 1 ratio of private spending to public investment, a figure substantially higher than most traditional urban redevelopment projects, Koch said.
Other project highlights include:
*A $10 million payment to the city from Street-Works to fund public improvements outside of Quincy Center.
*50-cent per s/f maintenance fund paid for by Street-Works to fund improvements within the development district.
*$10,000 contribution to the city's Affordable Housing Trust Fund for every housing unit developed.
Tags:
Previous StoryNext Story
Print
PDF