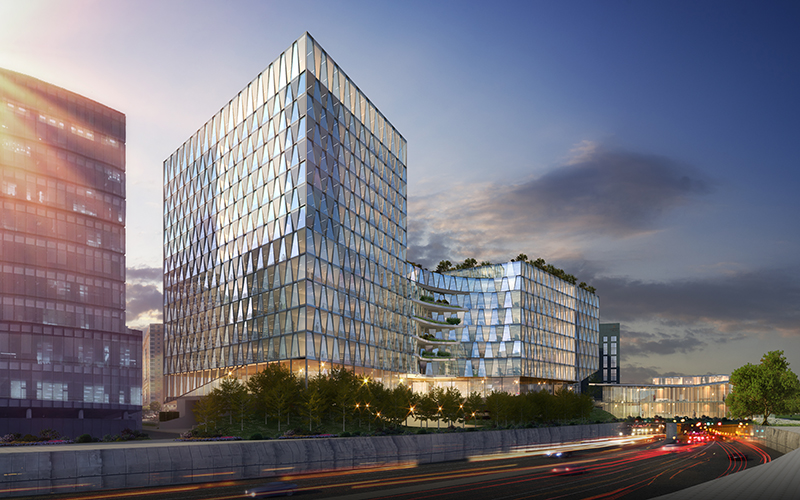 Boston, MA In today’s climate of racial reckoning, it’s fitting for Moody Nolan, the nation’s largest African American-owned architecture firm, to be honored with the 2021 Architecture Firm Award from the American Institute of Architects (AIA). The annual award is the highest honor the AIA bestows on an architecture practice. The award recognizes a firm that has consistently produced distinguished architecture for at least 10 years. This is the first time a black-owned architecture firm has ever received the award in the AIA’s 58 years of conducting the annual recognition.

“We are delighted to be recognized with our industry’s most prestigious award for our work, which always has been grounded in a belief that a diverse design team is more creative and delivers architecture that better responds to the needs of the community,” said Jonathan Moody, who succeeded his father in the role of CEO in January 2020. “Boston is a core target market for us and we look forward to continuing to expand in key sectors including higher education, healthcare and housing.”

Moody Nolan/Boston is part of the Omni development in the Seaport, the first of Massachusetts Port Authority (Massport) precedent-setting designations based on the inclusion of minority and women-owned companies. Moody Nolan/Boston also partnered with local architectural firm, Arrowstreet, as part of the Lincoln Property development team, which was awarded Parcel H by the Massport Board on January 14, 2021.

The Omni Boston Hotel at the Seaport is located across the street from the Boston Convention and Exhibition Center and will be a magnet for convention goers when it opens later this year. The 1.1 million s/f development has been heralded for its innovative approach in creating real participation from the city’s minority and women investors. Moody Nolan/Boston is currently working with the developers to design and execute the interior spaces of the hotel.

“The changes that I’ve seen happen in and around Boston over the past 15 years are truly amazing. It’s been really exciting to be part of it with our work on the Omni Hotel and now our continued work with Parcel H. I’ve had the opportunity to connect and re-connect with so many great partners, consultants and clients in my current role with Moody Nolan,” said Scott Mandeville, director of operations for Moody Nolan/Boston.

Like millions of black Americans across the country, Curt Moody has seen more than his share of injustice over the decades. Such intentional display of inequality in the field of architecture is what prompted him in 1982 to open Moody Nolan. Since then, the firm has grown by 200 employees across the country, and has been recognized for a number of projects including being part of the $1.5 billion expansion of the Jacob K. Javits Convention Center in New York and Englewood S.T.E.M. High School in Chicago. Other notable national projects include Wintrust Arena, Martin Luther King Jr. Branch Library in Columbus, OH, and Malcolm X College and School of Health Sciences.

The No. 26 ranked architecture firm (Building Design + Construction) has received more than 49 awards from the American Institute of Architects and 45 from the National Organization of Minority Architects. While the recognition makes them immensely proud, it never overshadows the firm’s deep commitment to meeting the unique goals of each client. Its primary focus is always to work collaboratively with clients from initial idea through construction to ensure their vision is met. “This core belief, we think, is what sets us apart from the vast majority of award-winning design firms,” says Curt Moody, chairman of the board.

Being able to leave a legacy for his son Jonathan Moody evokes special memories for the elder Moody. “Most Black-owned businesses do not become generational-owned businesses because often we lack access to capital, networking, and other necessary resources to propel a business forward,” says Curt Moody. “This is why mentoring and fully supporting new hires has been a passion of mine. We have to prepare the next generations to take the helm to carry on our legacies.”