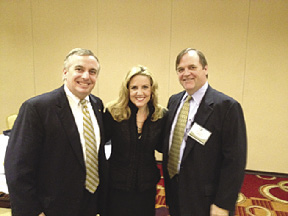 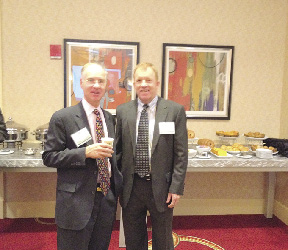 On Wednesday November 9th the New England SIOR Chapter held another breakfast event in their successful series of Landlord Breakfasts. This event was hosted by Campanelli Companies. Held at the Newton Marriot, it was well attended by over 35 Chapter members, candidates and guests. Chapter president Tom Farrelly, SIOR of Cushman & Wakefield made a few introductory remarks citing the growth of SIOR and the increase in younger members during 2011 through recruiting. Farrelly then introduced the keynote speaker, Stephen Murphy, director of acquisitions at Campanelli Cos. Farrelly mentioned that Murphy would give Campanelli's view on the commercial real estate market, their newest projects and target acquisition criteria.
Murphy presented a fascinating overview of the European debt crisis. He explained just how tenuous a situation many of the world's major banks are in due to their exposure to the so called "PIGS" - Portugal, Italy, Greece and Spain. For many in the audience it provided an enlightening realization. The major U.S. banks are only a group of bit players on the world economic stage. The U.S. certainly has its problems, but the issues in Europe are much, much greater. Murphy went on to say that although the U.S. banks' direct exposure to the European debt crisis is limited, the overall toll which it may likely take on the world economy will surely reach our shores.
With this global backdrop, Murphy set about providing a background summary on Campanelli Cos. The company began as a few brothers with dump trucks hauling dirt to construct the runways at Logan. Then after World War II, they decided as a group to become a major residential builder. Later in the '70s and '80s, the firm branched into retail development. They constructed many of the region's major early shopping centers from Maine to Massachusetts. More recently as a firm, the focus has turned to office and industrial properties. Currently the firm focuses on "value-added" acquisitions and build-to-suit development. They have also been successful with a recent run of development of 3rd party logistics facilities for the frozen food industry. All these facilities have been located at major ports of entry and housing imported frozen foods. Once again this sector has shown the manner in which our economy is intertwined with the world economy.
Murphy closed with remarks complimenting the brokerage community and stating that, without SIORs offering them opportunities, they could not enjoy the successes which they have had. Chapter president Farrelly thanked Steve Murphy for his remarks and the Campanelli Cos. for hosting the event.
There was a period of networking after the event.

The Chapter would like to thank Tony McDonald for organizing these notes and Don Mancini for the photos.
Tags:
Previous StoryNext Story
Print
PDF