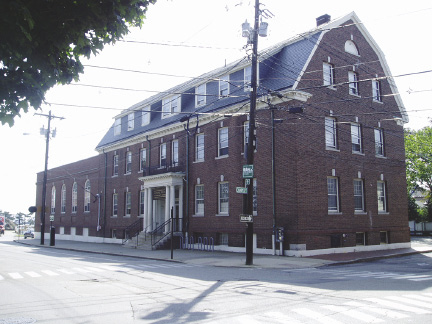 The City of Portsmouth has retained Paul McInnis, Inc. to conduct a modified sealed bid sale of the Connie Bean Community Center located at 143 Daniel St.
The sizeable brick building measures approximately 15,000 s/f and sits on 0.33 acre lot with a small parking lot, basketball gymnasium and three-story central building looking out at the Piscataqua River and the working port on the New Hampshire-Maine line.
Its history can be traced to 1913, when the city purchased the parcel from J. Irving Haley and transferred ownership to the Army and Navy Association.
The building was renovated in 1944, but it closed in July 1946 following the end of the Second World War. In October 1947, ownership was transferred from the now-defunct Army and Navy Association to the city for $1 following seven months of deadlock between the groups. Eventually, the sides agreed to conditions that the building be used for recreational, educational and civic purposes; offered back to the government during national emergencies; and that adequate privilege be allowed to servicemen at all times.
From the 1950s to '70s, the community center was considered the place to be for city youth. What once was a building that housed programs such as judo, ballet and youth basketball, along with hosting dances and community events, has grown into a building that no longer has the use of its basement and top two floors.
The city assesses the property for taxes at a value of $1,684,400 and has ordered the property to be sold to a new buyer to breathe new life into rehabbing the building or to invest in and permit a new downtown real estate development. The sealed bids are due on December 12 and interested parties are encouraged to contact Paul McInnis, Inc. by visiting their website at www.paulmcinnis.com.
Tags:
Previous StoryNext Story
Print
PDF