Pickleball maybe the answer you are looking for. The sport of pickleball itself is a combination of tennis, badminton, and ping pong all into one sport. Pickleball is one of the fastest growing sports you may not yet heard of. The USA Pickleball Association says player-ship has increased by 650% in the last six years! It is no longer a sport for just senior citizens, but a sport for all ages. The sport was founded in 1965 and it can be played with 2, 3 or 4 players. Pickleball has become the latest rage in court sports in New England and the world. The USAPA Organization states there are over 15,000 indoor and outdoor pickleball courts in the United States alone! The sports and fitness industry association put the number of players in 2016 at 2.5 million in the United States alone. 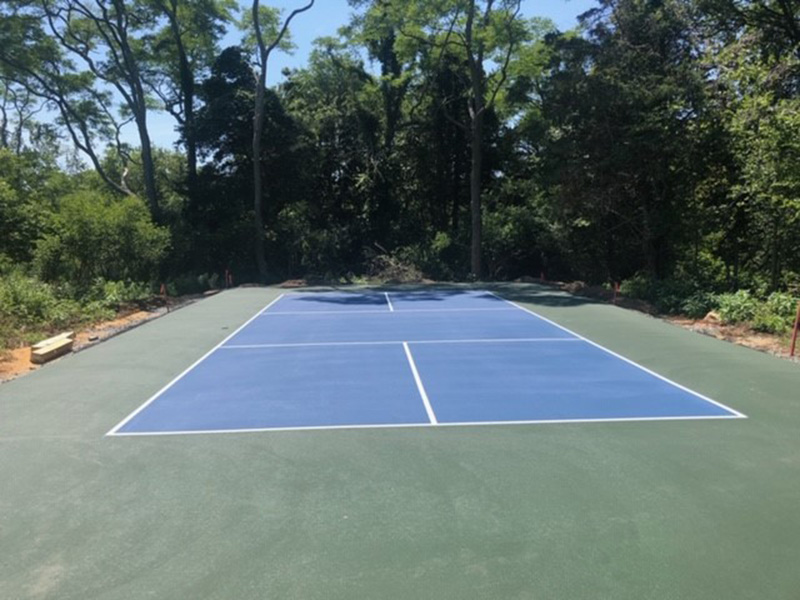 The sport started out as a social game, but as more and more people play the game (more than 3 million are currently playing the game according to the Sports & Fitness Industry) it is becoming more competitive. November of 2019 12-year-old Anna Leigh Waters and her mother won the USA Pickleball pairs championships. So, it is growing as a sport overall and has their own championships even. Pickleball is now being played in town recreational programs, physical education programs in schools, and even in public parks. Pickleball may be the answer to your tennis/sport court dilemma.

Here in New England we are seeing a increased trend in the request for either adding pickleball lines to existing tennis courts, in condominiums, town parks, schools and even private courts. The popularity of Pickleball has grown vastly over the last five years. While it seems, there are not as many avid tennis players, pickleball is something everyone of all ages can not only play but play together. Spending time with grandparents, parents, children, siblings, and friends outside while we have the nice weather is something New Englanders are known for. By increasing playing time outside, with others being active is more and more essential to people of all ages. Condominiums and apartment complexes are a great place to start with a pickleball court because there are usually very different people in proximity with each other that tend to be active and curious about how a new sport is played. Whether it is a young child that sees people playing, a college student, or a senior citizen when people see others playing pickleball and do not know what the sport they are playing, they become curious. While they are curious, they typically want to learn what sport it is, how to play it and what the rules are. Since Pickleball is for all ages and easy to learn, people pick it up very quickly. Because of the sport’s simplicity in rules and play, it allows more people to learn to play and want to play quickly, growing the use of the courts in a very short amount of time.

The best part of this increased trend with pickleball being played, isn’t just that is a new sport and people are outside being active. It’s that people of all ages can participate together. The sport itself is easy to learn, the equipment needed to play is inexpensive, and it provides people with hours of fun with friends, family and even strangers they just met. So, if you have or know of an old tennis or basketball court that could use some more play time, think about adding pickleball as a sport to the court and see the courts use grow! There is no better time than now, to make sure the old tennis courts are brought back to life and given another chance at another life if the court is not being used regularly.

The actual dimensions of the court are 20’x44’ for both singles and doubles. 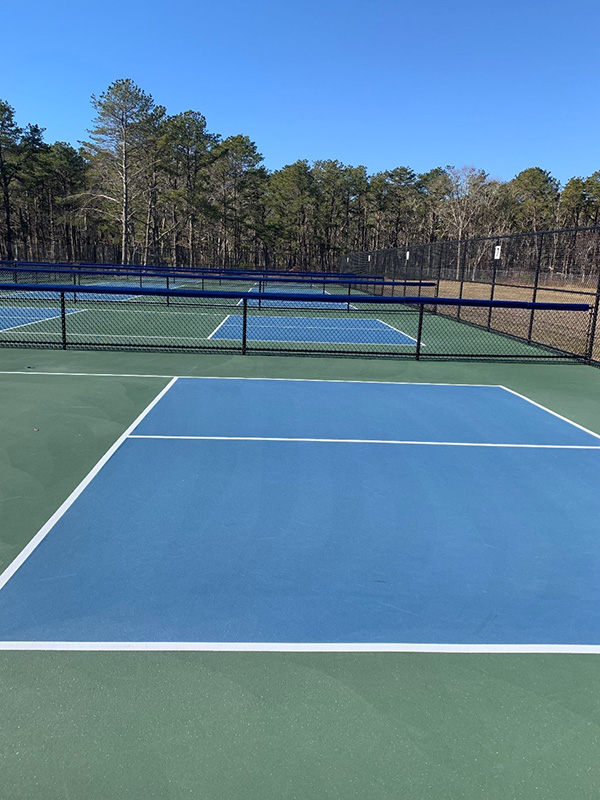 The equipment needed to play Pickleball is very minimal. A Pickleball paddle is needed which is smaller than a tennis racquet. It was originally made from wood but are now made from lightweight composite materials like aluminum and graphite. You will also need a net and balls. The balls have holes in them like a whiffle ball and there are ones for inside and specific ones for outdoor use. The ball has to be all one color and can be white, yellow or green. There are International Federation of Pickleball (IFP) specifications. This organization was formed to ensure consistency of the rules and regulations wherever pickleball is played.

Pickleball players tend to wear anything that is comfortable for the weather conditions they are playing in. Shorts, te shirt or even a sweatshirt is comfortable to play in as long as it doesn’t restriction arm or leg movement. As far as footware, sneakers or running shoes do not give the support needed for the side to side motions of playing pickleball, but they will work. There are actual court shoes that more serious players invest in. These shoes are like court shoes designed fro badminton or volleyball. Eye protections is recommended but not required.

The Basic rules are on the USAPA Organization website, for more details visit their website at www.usapa.org