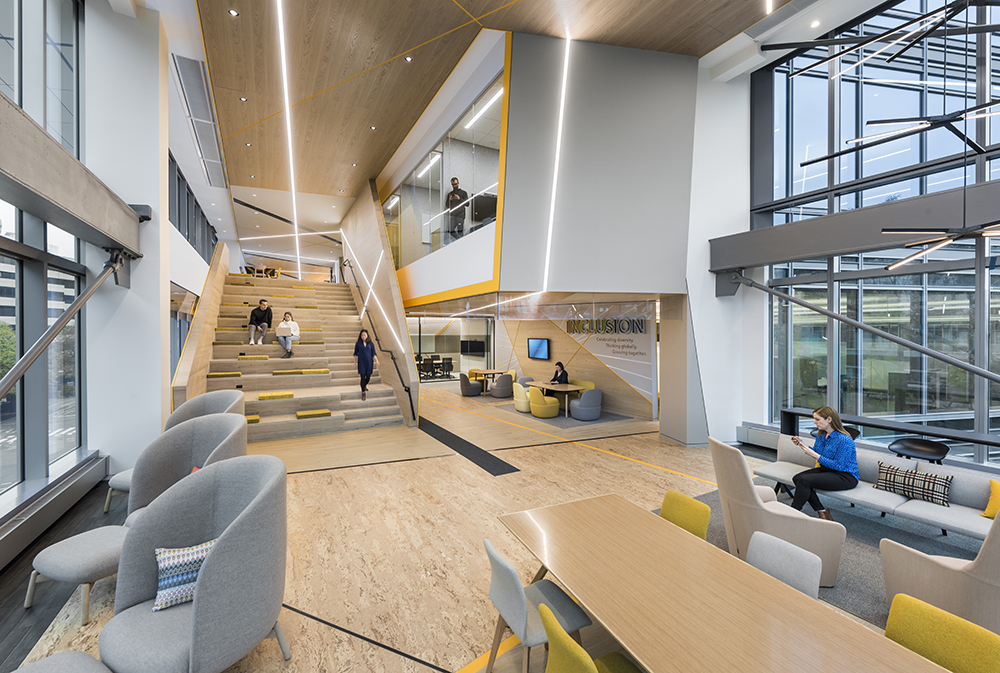 Cambridge, MA Sasaki, the award-winning international architecture and design firm, completed their interior work at Akamai’s new global headquarters in the Kendall Sq. neighborhood of the city. Sasaki served as Akamai’s design firm for the 19-story, 480,000 s/f property, which opened on November 1st.

Akamai’s goal at the onset of the project was to unite all departments and divisions on one campus, as the company was previously spread throughout six different buildings in Kendall Sq. Every interior detail of the new headquarters was methodically planned by Sasaki and is symbolic of the project’s mission statement, which was “to connect the world, we must first connect each other.” Akamai’s stakeholders and real estate team, with Sasaki’s design team, intently listened to employee suggestions and feedback. While many companies debate the virtues and pitfalls of a collaborative, open workspace against the traditional cubicle, Sasaki blended the two concepts, creating the “Akamile.” 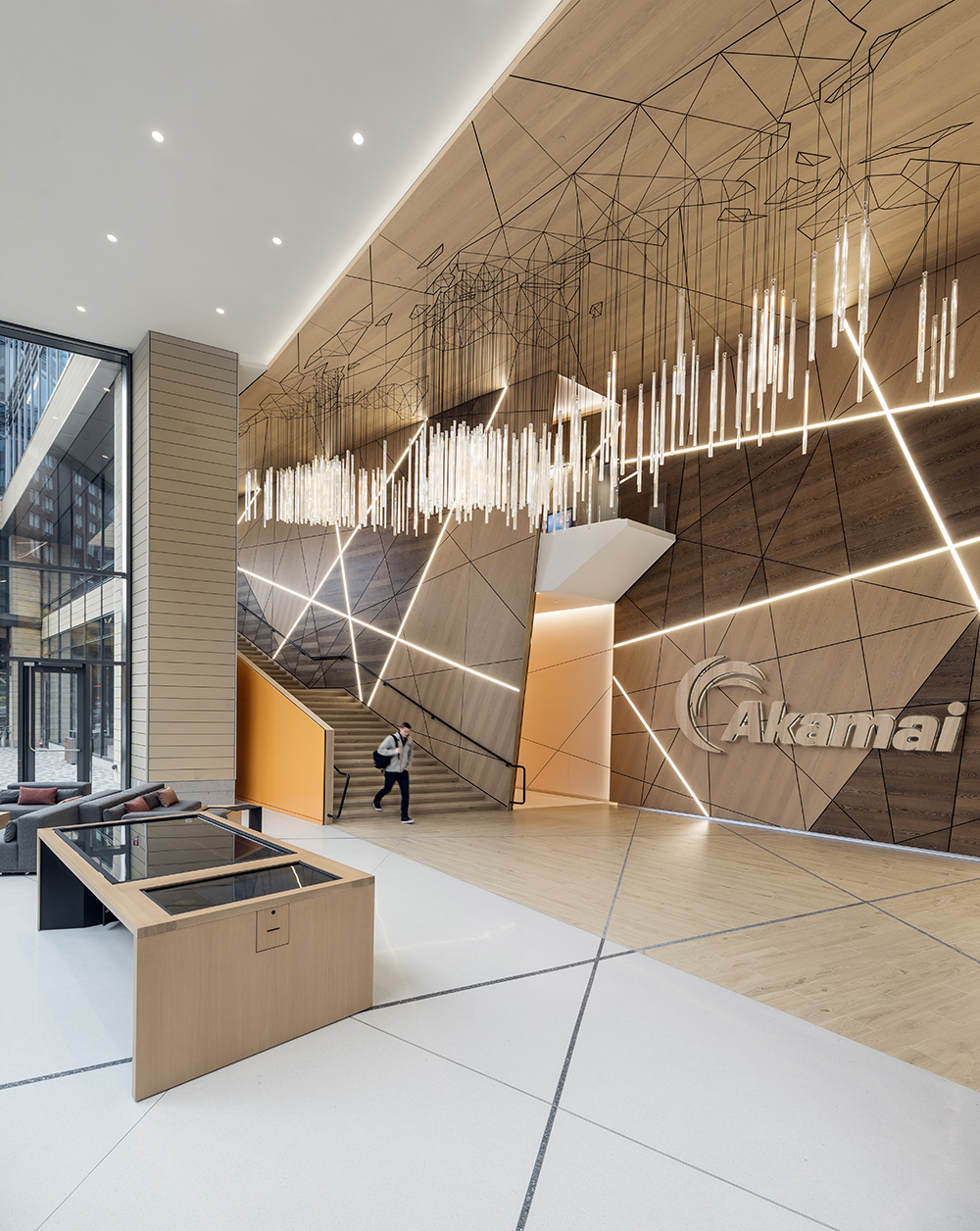 The Akamile is a vertical, continuous path that begins at the street-level lobby and ends at the café on the 19th floor. The Akamile is designed as a larger organizational concept to increase employee interactions, encouraging people to walk throughout the entire building. For example, the main dining café, outfitted in Akamai’s signature blue, is on the top floor, with views of Boston and Cambridge. Its strategic placement speaks to Akamai’s company culture, as the top floor is reserved for public space, instead of c-suite executives. The Akamile contains all communal work and social spaces, from high-tech conference rooms equipped with video capabilities, to game rooms and a library. 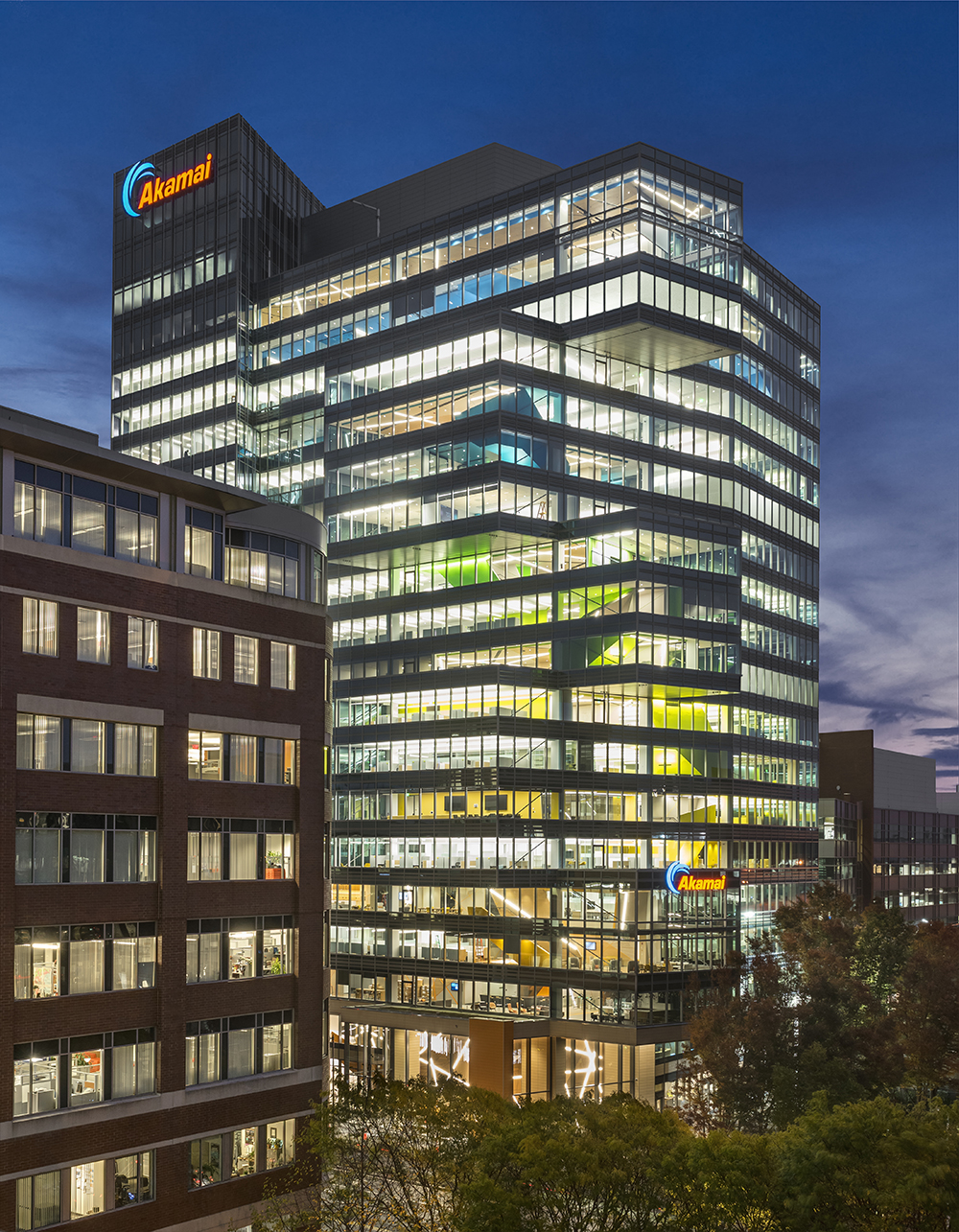 Of the 19 floors in the building, none share the same design. The varying layouts and amenities create collaborative traffic as individuals make their way through the day. “This building is tailored to Akamai’s culture, not the latest trend,” said Victor Vizgaitis, Sasaki senior principal and architect. “The Akamile fits perfectly into Akamai’s mission of creating an ideological and innovative environment. Akamai employees can work together along the Akamile, but all have individual desks for when they want or need privacy.”

The Akamile harnesses the power of color in several unique ways, each floor transitioning in color, starting with Akamai-brand orange in the lobby, through the spectrum, and ending in Akamai’s second brand color blue on the 19th floor. Most importantly, this concept is used as a wayfinding tool, allowing employees to know where they stand within the large building through the color palette of the space. Colors also denote public vs. private work areas, as the individual workspaces outside of the Akamile maintain a more quiet and neutral color palette.

As a leading global technology company, Akamai integrated tech into much of the building’s design. Within the two-story lobby, there is a light fixture which represents an abstract map of the world in which the company operates. Each of the hanging pendants can be controlled by a touch-screen table in the lobby, where visitors can use the light frequencies in the chandelier to simulate web traffic. This incorporation of technology into art and interior design can be seen in helps illustrate Akamai’s commitment to connectivity and can be seen in numerous examples throughout the building.

Another key focus for Sasaki and Akamai was sustainability. The core and shell of the property has received LEED Gold certification, and Akamai is currently pursuing WELL certification for the interior design. The rooftop is covered with a solar array, providing over 82,000 kWh/yr of electricity to the building. The heating and HVAC system features chilled beams which significantly improve the energy efficiency up to 30% over traditional systems.

Developed by Boston Properties, Akamai signed a 15-year lease for the space, with over $100 million invested into the interior build-out.