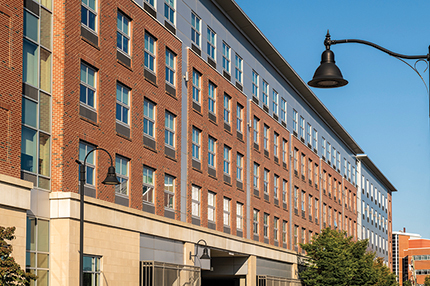 Chelsea, MA The Residence Inn at 200 Maple St. has been transformed into a dual-brand hotel known as the Residence Inn/Fairfield by Marriott. PROCON designed and constructed the 26,000 s/f Fairfield addition to the existing hotel. The design-build firm collaborated with developer, XSS Hotels, and Colwen Hotel Management. The dual-brand hotel is highly visible just off Rte.1, minutes from Boston Logan Airport and less than three miles from downtown Boston.

At 129,000 s/f, the more robust establishment blends comfort, productivity, and affordability in 200 rooms complimented by amenities targeting different guest segments. The Residence Inn caters to long term guests and offers 120 extended-stay king and double-queen studios with fully-equipped kitchens featuring a cooktop, microwave, dishwasher, and refrigerator. While the 80-room Fairfield offers king and double-queen studios targeted towards a shorter-stay. Amenities are shared by both brands.

Along with the 80-room Fairfield addition, extensive renovations were made to the public spaces to accommodate a larger influx of guests. The existing Residence Inn remained open as multiple upgrades were made to the fitness center, buffet area, 24/7 market, the dining area, 24-hour business center, and the main lobby.

In turn, all the existing guest rooms were refreshed with updated furniture and finishes for a seamless and modern look throughout.

PROCON consulted with Colwen Hotel Management and Marriott International to produce a blended lobby design for a seamless customer check-in experience. PROCON’s vice president of architecture Kent Beirne said, “To create a uniform blend of the two brands, we used complementary materials that would work with the existing building while including subtle differences to distinguish between them. The end result will appear as though the entire building was constructed at the same time.”

Altogether, in the past five years, PROCON and XSS Hotels has teamed-up on four upscale hotels in Chelsea; namely the TownePlace Suites by Marriott, Homewood Suites by Hilton, and the Holiday Inn by Intercontinental Hotels Group (IHG). The two companies also partnered on the existing Residence Inn, but as the hospitality landscape has continued to evolve, they have evolved with it by incorporating dual-brands into their hospitality portfolio. As such, they have already opened a Residence Inn/Fairfield in Waltham and a Staybridge/Holiday Inn Express in Quincy with two more currently underway in Revere and Medford.

“The Residence Inn and Fairfield are two of the finest Marriott accommodations to be found under one roof. This is a wonderful opportunity to provide a wider selection of accommodation choices for busy travelers who want to get to the airport easily and access Boston.” said Mark Stebbins, XSS Hotels’ partner.

In the next few years, the two companies have plans to roll out additional dual-branded hotels in Greater Boston, and the New York metropolitan area.