Project of the Month: Fulcrum selected by SMC Management to construct 228-unit Residences at Riverfront Landing 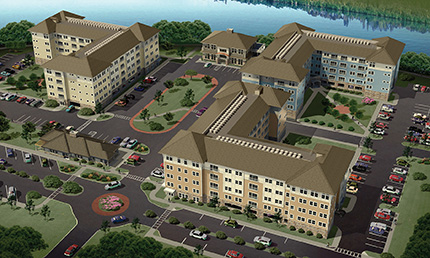 Nashua, NH Fulcrum was selected by SMC Management Corporation of Watertown Mass. to construct the new Residences at Riverfront Landing project located at 62-70 Bridge St. Boasting scenic views of the Merrimack River, the project will include three separate residential buildings consisting of four floors of apartments above a deck of structured parking. Each residential building will consist of 76 units, for a total of 228, market-rate apartments and is a partnership between SMC Management and Master Developer Renaissance Downtowns. The site is commonly identified as the Bridge St. “skate park” site, and is situated adjacent to a levy that was constructed in 1947 and since has been maintained by the city.

In addition to the residential buildings there will be two other buildings constructed on the site, a 2-story building will be constructed to a “core and shell” finish, as part of the base project, to provide commercial lease space for yet to be identified tenants. The first floor is intended to be fit-up for retail or office space. The second floor is being targeted for a restaurant and will be fit-up once a tenant is identified. An exterior deck will wrap the building’s second floor, with a paved patio on the grade level, taking full advantage of the river views. The second building will be a 3,390 s/f clubhouse style building that comprises of a leasing office, gym, cyber café, and small community room. The gym is anticipated to contain treadmills, benches, stationary bicycles, and free weights. The cyber café will also serve as a lounge, with computers being accessible for resident use. The community function space will also be available for rent for private events. 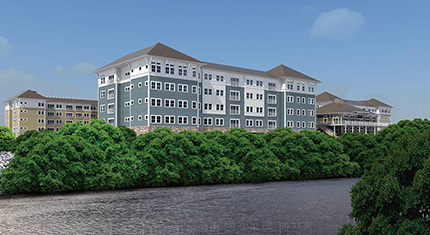 The redevelopment of this industrial property has been a 7 year collaboration and public private partnership between the city of Nashua, the Nashua Business and Industrial Development Authority (BIDA), the Nashua community, The Bonnette Family and Renaissance Downtowns as master developer. The total master plan calls for over 750 residential units and 100,000 s/f of retail space. This project is the first phase of the larger planned revitalization of the area that will have a powerful impact on this part of the city of Nashua, adding an infusion of activity and life. As a new eastern gateway into downtown Nashua, the Residences at Riverfront Landing brings a welcomed improvement to the city in the form of a residential complex. The project will bring some noticeable changes to the immediate area in the form of off-site street improvements, specifically, the incorporation of a new traffic light at the intersection of Bridge St. and D St.  Another major component of this project is the relocation of the existing skate park, currently on the property. In a partnership with the city of Nashua, the skate park will be relocated to a city owned parcel of land adjacent to the Stello’s Stadium and the Conway ice arena. 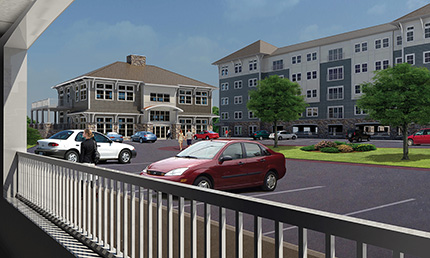 Another notable feature includes new power feeds for the on-site cell tower that services T-Mobile, Nextel, and Sprint. As part of the overall storm water management the onsite paving areas will consist of a combination of porous and conventional pavement.

Work on the project began in mid-November, with completion scheduled for spring 2018. A ceremonial groundbreaking is scheduled to take place on December 1st with participation by ownership, design and construction team and local, state, federal officials.

TFMoran provided civil engineering, permitting, and landscape architecture services. The project architect is DeStefano Architects of Portsmouth, N.H. Funding for the project is being facilitated by Eastern Bank.

Please visit fulcrum-nh.com to learn more about Fulcrum and their project history.