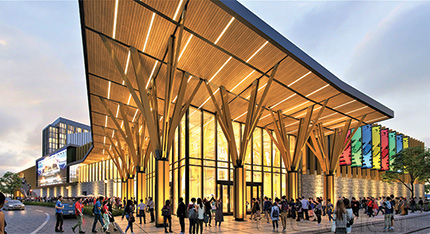 Westbrook, ME The owners of Rock Row released renderings and details on their plans to build the largest conference and meeting center in the state at the $600 million, 110-acre development. In addition, ASM Global—the world’s leading producer of large-scale events and entertainment experiences—is working with Rock Row on initial planning. Newly-released details of the yet-to-be-named venue are as follows:

• 110,000 s/ft of divisible conference and event space—including a 35,000 s/f exhibit hall, pre-function space, ballroom/meeting space and an enclosed performance space with a retractable wall that opens up to lawn seating for concerts

Expected cost for the new four-season facility and parking garage is $75 million (not including hotel), with a targeted construction start date of 2023. The new venue will replace the seasonal open-air Maine Savings Pavilion at Rock Row which closed permanently in September due to construction of the Rock Row Medical & Research Campus.

The popularity and success of the open-air and seasonal Maine Savings Pavilion was a key factor in moving towards an enclosed, four-season facility. 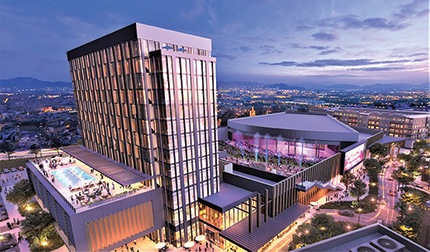 “Maine is a world-class destination that doesn’t have a world-class performance or event venue to offer—until now,” said Josh Levy, founding partner at Waterstone Properties, the owners and developers of Rock Row. “As Maine’s premier Innovation District, Rock Row is looking to attract new types of emerging companies and skilled workers to the state, while also defining Maine as a global catalyst for business growth. It’s absolutely vital to have a modern conference and meeting facility like this at Rock Row to attract companies, and people, from across the globe.”

When fully open, the conference and meeting center at Rock Row is anticipated to bring 343 new full-time jobs to the region. This includes 86 direct full-time employees, 147 full-time jobs induced by associated visitor spending and an additional 97 full-time jobs supported from indirect/other induced spending—totaling an annual average of $13.2 million in wages. Approximately 345,000 guests are expected to attend ticketed and non-ticketed events per year, with more than 25% travelling from outside the State of Maine. (*Source: 2021 Economic Impact Report, University of Southern Maine

Maine is one of the only states in America that does not have a major conference and convention center that can host large-scale corporate events and top performers. Currently, the largest single-room meeting facility in the state has a capacity of approximately 1,500 guests. Greater Portland is one of only four Metropolitan Statistical Areas* in the United States that does not have a convention center. Currently, large employers such as IDEXX (the City of Westbrook’s largest employer) have to leave the state to hold high-capacity events and conferences.  (*MSA—a nationally-accepted benchmark created by Neilsen to define a geographical area and market for television and media buying.)

“This is an idea whose time has come,” said Michael Foley, Mayor of the City of Westbrook. “As the premier conference and event center North of Boston, Rock Row’s plan will help bring our city, region and state to the next level of services and hospitality. It’s a resource that is very much needed. And Rock Row in Westbrook is undoubtedly the perfect location for a venue of this size and scope.

“You can’t squeeze a facility of this size and scope just anywhere and expect it to function effectively,” continued Mayor Foley. “Building this at Rock Row allows us to plan properly from the beginning and ensure there is adequate parking, traffic flow and other features that will maximize use and minimize local inconveniences. We only have one chance to do this right and create something we will all be proud of.”

The recent announcements are a result of years of fact finding, with Rock Row management meeting with communities and organizations throughout the state to better understand the need for a modern conference and event facility in Maine. The Rock Row team also toured major conference and event venues across the country to help identify successful designs and operating practices.

According to the developers, the conference and meeting center at Rock Row will incorporate the “best of the best” architecture and operations and is modelled in large part after the nationally-renowned Toyota Music Factory in Texas—which also features a retractable wall that opens up to a lawn-seating area. All interior walls in the Rock Row venue would be movable to accommodate multiple events and meetings of various sizes at the same time.

“Audience tracking of our outdoor-concerts at Rock Row revealed that a large percentage of guests came from outside the state, travelling four hours or more to visit Westbrook,” continued Levy. “We also tracked how those same guests spent money at local restaurants, hotels and businesses before and after the show. Without question, our new event facility at Rock Row will have a profound, and positive, economic impact on the region and state for many decades. We are filling a real and pent-up need and will attract regional, national and international conferences that our state and local businesses are currently losing out on.

“The Rock Row Conference and Meeting Center is perfectly situated to benefit and strengthen the entire State of Maine’s economic development growth while not stressing the region’s already-overburdened infrastructure,” continued Levy. “Restaurants, hotels and other area businesses will all see a boost in business, without the problems associated with having a convention center in a constrained urban neighborhood.”

The new venue at Rock Row is less than five miles and one exit away from the Portland International Jetport.