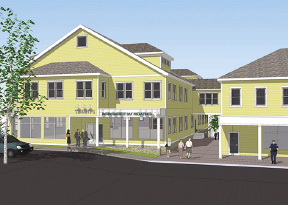 Construction has begun on a new 22,000 s/f office building at The Village at South County Commons located on Rte. 1 (Tower Hill Rd.). The three-floor New England style building's first tenant will be Narragansett Bay Pediatrics, who signed a lease to occupy the entire 7,200 s/f first floor. According to Jeffrey Saletin, president of Saletin Real Estate Group of Cranston, property manager, they expect an early fall occupancy for the Coastal Medical affiliate.
The Village at South County Commons is one of Rhode Island's largest lifestyle centers with more than 200,000 s/f of medical and general offices, retail, restaurants and services.
"We have seen an increased demand in office space and we are responding to that need with a brand new building," Saletin said. He added that negotiations are underway with two large medical practices to lease space in the new building. "Medical growth has been strong the past couple of years at The Village at South County Commons."
In 2014, Lifespan leased a 4,477 s/f office and Clinical Services of Rhode Island leased a 1,542 s/f office. Rhode Island Eye Institute recently opened its only South County location - a 12,150 s/f office in a building that will connected by a walkway to the newly constructed office building.
Tags:
Previous StoryNext Story
Print
PDF