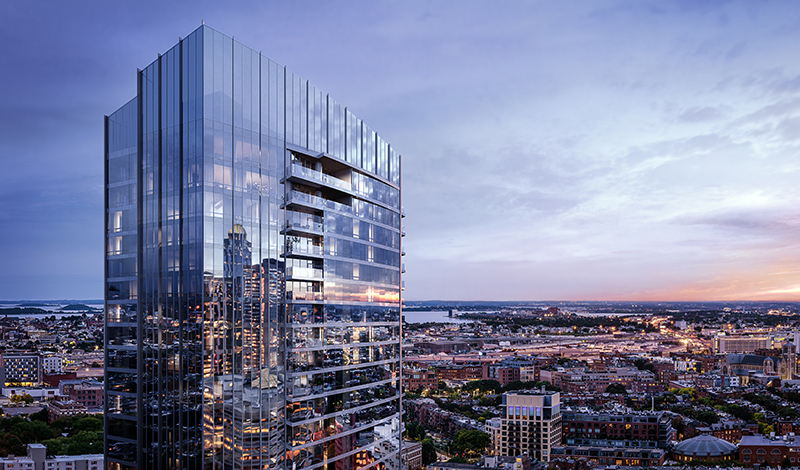 Boston, MA Despite these trying times, Raffles Boston Back Bay Hotel & Residences forges ahead, and marks a milestone as its structure goes vertical. Opening in 2022, the 35-story, LEED Gold $400 million project will be the first mixed-use property in North America for Raffles Hotels & Resorts, a world-renowned and iconic hospitality brand that continues to grow.

In what is a rare occurrence within the city real estate, Raffles Boston secured the air rights over the adjoining University Club, allowing it to soar to 35 stories through the use of a cantilever structure designed by structural engineers McNamara Salvia. Architectural firm, The Architectural Team, Inc. (TAT) spearheaded Raffles Boston’s exterior, transforming its relatively narrow urban footprint through engineering ingenuity.

Suffolk leads the project’s complex build. Following Raffles Boston’s fall 2019 groundbreaking, construction focused on demolition and below ground work for over a year. In the spring of 2020, after a 10-week COVID-19 shutdown, Suffolk reignited work as safely and quickly as possible, working with the city in order to take a proactive approach to COVID-19 safety protocols and offer workers the highest quality of protection.

Last month, 1,428 cubic yards of concrete was placed for Raffles Boston’s seven-foot thick mat slab, which equates to 6 million pounds of concrete and 13 miles of rebar. Prior to pouring the mat slab, a dense field of six-foot wide caissons was drilled 150 feet into bedrock, following which 1.5 million pounds of steel plate girders, fabricated from three-inch thick steel plate, tied the grid of caissons together. The concrete structural core and columns that form the building’s aboveground structure rest on this concrete mat slab.

The Tower Crane, active as of today, sits on the corner of Stuart St. and Trinity Place, and is 150-feet tall. It will climb up to 512 feet as the building tops out. Working on two shifts, the Tower Crane focuses on the concrete core structure during the first shift, and erecting the first six floors of steel on its swing shift. Once Raffles Boston reaches the seventh floor, the crane will revert back to work on the building’s concrete core and superstructure until the project’s topping out.

The team of trade partners on the project site, managed by Suffolk, will soon expand to 80 ironworkers, carpenters, operating engineers, laborers, electricians, plumbers and other mechanical trades.

Next month, Raffles Boston will celebrate another construction and design milestone: As the structure reaches the 4th floor, a 30-foot cantilever will curve out and over its 100-foot neighbor, the University Club, before climbing another 340 feet into the sky.

“It is one of the most exciting moments in every project when the ‘non-glamorous’ aspects of construction – the utility work, abatement, demolition, excavation and foundation work – come to an end, and a building begins to rise to the sky. Moving from a phase where the worms have the best view of daily progress to one where people on Stuart Street can watch progress on a daily basis is exhilarating. After nearly a full year of everyone’s lives being so challenged by COVID, signs of growth are so welcome. Our team’s excitement about bringing Raffles Boston to fruition grows daily. This project will infuse new life into Boston and meet people’s love for adventure, conviviality, warmth and discovery,” said Warshaw of  Noannet.

“This marks a major milestone for Raffles Boston, and its progress is a testament to the team’s diligence and hard work, as well as to our collective belief in the strength of the Boston region – particularly as we look forward to easing travel restrictions and meeting the pent up demand we expect to see in the coming months. With its unique position overlooking the Charles River, Back Bay skyline, and Boston Harbor, and access to incredible lifestyle amenities, Raffles Boston is set to be a landmark development with a truly one-of-a-kind hospitality offering and we look forward to advancing towards completion with our partners,” said Goldstein.

Located at 40 Trinity Place, Raffles Boston joins Raffles’ prestigious collection of 16 individually unique and timeless properties calling many of the world’s most fascinating cities and vibrant destinations home, from Singapore to Paris, Bali to Phnom Penh, and Dubai to the Maldives. Fourteen Raffles properties, including Boston, are currently under development.

Raffles Boston will provide over $22 million in public benefits in total, including street and public realm improvements, seven on-site affordable housing units and a contribution of over $13 million that will support additional affordable housing in the city.