W.L. French Excavating recognized with the 2016 Mass. Family Business of the Year Award by Northeastern University 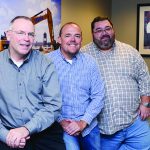 Earlier this summer W. L. French Excavating was recognized as the winner in the large firms category (100+ employees) at the 2016 Massachusetts Family Business of the Year Awards, presented annually by the Northeastern University Center for Family Business.

W. L. French Excavating was selected for the honor based on its excellence in the categories of business success, positive business and family linkages, multi-generational family involvement, contributions to the community and industry, and innovative business practices or strategies.

“It is an honor to be named Massachusetts Family Business of the Year.  We are very proud of the work we have done as a family to build and grow this business to where it is today.  We consider our core group of employees and the vital team that supports us a part of our family and our success  – we would not be where we are today without them,” said company president, Bill French, Jr.

W. L. French was also named as one of Boston Business Journal’s Top 100 Largest Private Companies in Massachusetts, moving up 13 spots from last year’s ranking of private companies based on self-reported revenue.

Placement on these lists affirms W. L. French’s success and growth resulting from its commitment to a wide range of clients, its role as a leader in the Massachusetts construction and soil management and disposal industry, as well as its philanthropic and community-focused efforts.