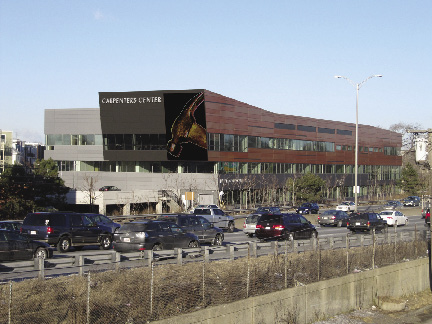 The New England Regional Council of Carpenters (NERCC) has announced the grand opening of the Carpenters Center, the new NERCC headquarters and Boston Carpenters Training Center located at 750 Dorchester Ave. The 70,000 s/f facility replaces leased offices in South Boston as well as a training facility located in Brighton.
"After 10 years of looking for a new home for the New England Regional Council of Carpenters and the Boston Training Center, it has finally become a reality," said NERCC executive secretary-treasurer Mark Erlich.
"The Carpenters Center represents all aspects of our union -- member representation, training, organizing, funds information, banking services, and a vision center. It is a member-built facility to provide services for our members."
It's also quite striking. The bold use of colors, wood, metal and glass, and the very open interior reflect the organization's ideals.
"We're a traditional organization that has been around for over a hundred years, but we are also a modern, innovative organization." Erlich said. "We're a group with an enormous sense of pride and we want people to see what we do."

ADD, Inc was the architecture and design firm, Liviu Marza, the design leader, and Suffolk Construction was the construction manager for the project.
The proximity to the Southeast Expressway gives the Carpenters Union great visibility, with over 280,000 commuters passing the building each day. Access to the facility is made easy by its close proximity to two exits on the Southeast Expressway (Andrews Sq. and Columbia Rd./JFK) as well as two MBTA "Red Line" stations and a bus line stop in front of the building.
The third floor of the building is office and meeting space for the NERCC, the New England Carpenters Labor Management Program (NECLMP), and Locals 51, 56, and 723. The second and first floors of the building are the new home of the Boston Carpenters Apprenticeship and Training Fund. Apprentices and journeymen will be able to utilize the state-of-the-art training facility to upgrade their skills, in both classroom and hands-on training space.
Additionally, First Trade Union Bank has a Business Solutions Center and ATM on the second floor. The bank will be open five days a week and will provide a wide range of financial services. Also on this floor is the Union Vision Center, which was previously located in Allston, MA.
The Carpenters' Center is LEED certifiable and is on target to achieve all 32 of the 26-32 points required for a LEED Certifiable rating.
Some preexisting items that earned points for the building include: site selection, development density and community connectivity, and public transportation access. The project also earned points for selecting materials including adhesives, sealants, paints, carpet systems and composite wood products that complied with VOC (volatile organic compound) limits, which release the least amount of contaminants into the environment.
Energy and water-saving features at the Carpenters Center include: a storm water system that will capture and treat 90% of the average annual rainfall and remove 80% of total suspended solids; low-flow toilets, urinals, and faucets throughout the building to conserve water use; and a white high albedo roof that will reduce the heat island effect. The solar reflex index of 110 on the roof exceeds the required index of 78.
This Green building has given the Carpenters Union a new, visually stunning, face. This is true with both the exterior and the interior of the facility.
There are design features throughout the facility that highlight carpenters work and add character to the building. One such example is the History Wall located on the second floor. Fourteen sepia-toned photographic images, mounted on Â¾" Plexiglas, hang on the walls beginning in the second floor lobby.
A tribute to the trade and its workers, the images date back to 1881 and run through present day, including three shots taken during the construction of the Carpenters Center. The History Wall celebrates the membership of the Carpenters Union and the evolution of the craft through the years.
The exterior of the building has a very modern and unique look, comprised of metal panel rainscreen, cedar tongue and groove rainscreen, curtain wall and storefront systems. The Alucobond panels chosen for the building were meticulously formulated and have a substantial amount of metallic fleck, which adds to the range of each color as drivers go past the building. On the Dorchester Avenue side of the building cedar accents were selected to help the building conform to the look of the residential neighborhood.
A major component of the exterior is a 32' H x 21'W transparent LED display located at the South side of the building. The display is made up of horizontally-oriented LED sticks, offering superior brightness, contrast, and image quality. The horizontal orientation and spacing of the LED sticks allows for 53% transparency when standing in the third floor conference room located behind the sign.
The display is the highest-resolution transparent LED display in the United States. There are only one or two transparent LED installations in the U.S. which are approximately half the resolution of this display and 1/3 the potential brightness - making this sign clearly visible in the middle of the day.
The sign will showcase the various aspects of the carpentry trade and its membership. It will not contain any paid advertising, but will keep the Carpenters Union tied in closely with the community by posting public service announcements.
"We want the sign to send a message about who we are, what we do, and our connections to the communities we live and work in," notes Erlich.
The Carpenters Center celebrates the rich history of the Carpenters Union while showcasing the training programs that the organization at the forefront of the ever-evolving construction industry. To find out more about the facility, visit the project's website at CarpentersCenter.com.
Tags:
Previous StoryNext Story
Print
PDF