Despite a slow start to the New Year, the Boston & Cambridge lodging market should pick up speed as spring rounds the corner. Like many urban gateway cities, the market has struggled in its recovery from the negative effects of the pandemic. While leisure demand came roaring back once many of the government mandates and restrictions were lifted in the spring of 2021, corporate and group travel was hampered through much of the year. Furthermore, international travel was subject to federal travel restrictions preventing visitors from some of Boston’s largest feeder markets, specifically Canada and Europe. Despite sizeable year-over-year increases in occupied room nights and average daily rate (ADR), the market’s performance was well short of pre-pandemic levels. Given the trajectory of the recovery in the second half of 2021 however, owners and operators are optimistic that the favorable trends will continue through 2022, albeit a bit later and at a slower pace than they would like.

2021 Retrospective: The Boston & Cambridge lodging market had an occupancy of 45% in 2021, only 55% of its level in 2019. The market’s ADR has recovered at a faster pace than its occupancy and reached $212, an 18% discount to 2019 levels. As a result, the market’s revenue per available room (RevPAR) was only 44% of its level in 2019. By comparison, the U.S. lodging market’s RevPAR in 2021 was 81% when indexed to 2019 and the country’s top-25 markets reached 64%, according to STR. Through year-end 2021, the overall Boston market ranks as the fourth slowest market in the recovery behind San Francisco, New York City, and Washington DC.

A Late Start: The recovery did not begin to take shape in Boston until late spring and as a result, year-end results are somewhat misleading when gauging the market’s recovery and potential trends moving into 2022. In the first half of 2021 the market’s RevPAR was $47, just 23% of its level in 2019. This increased to 63% for the second half of the year as RevPAR reached $142. The below table shows the market’s performance metrics, occupancy, ADR and RevPAR, indexed to 2019 levels as a measure of its recovery to pre-pandemic levels. 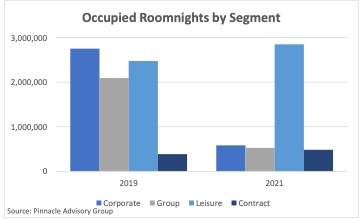 As evident in the 2021 monthly performance when compared to 2019, RevPAR began to recover as the state reopened with the ending of the State of Emergency which correlated with the region’s seasonal patterns for leisure travel. Despite the Delta and Omicron variants which delayed the expected return to offices and an increase in corporate lodging demand, the market benefitted from leisure-oriented events in the fall which included the Laver Cup, the rescheduled Boston Marathon, Red Sox playoffs, among other events. Additionally, the city’s two convention centers hosted multiple events and citywides in the second half of the year. Although these events did not make up for the lack of corporate demand, the third and fourth quarter performance helped occupancy inch closer to pre-pandemic levels. When considering the declines in demand and its volatility, operators have been successful in maintaining ADR. The market’s ADR index remained above 80% over the course of the second half of the year and reached 99% in December, meaning its rate was just 1% less than its level in December 2019.

A Shift in Mix:The market accommodated 4.4 million room nights in 2021, 42% less than its level in 2019. Leading up to the pandemic, the market’s reliance across its three primary demand segments, corporate transient, group, and leisure, was considered a strength. However, with dramatic declines in both corporate and group, the market has seen a significant shift in its demand mix, relying largely on leisure demand. 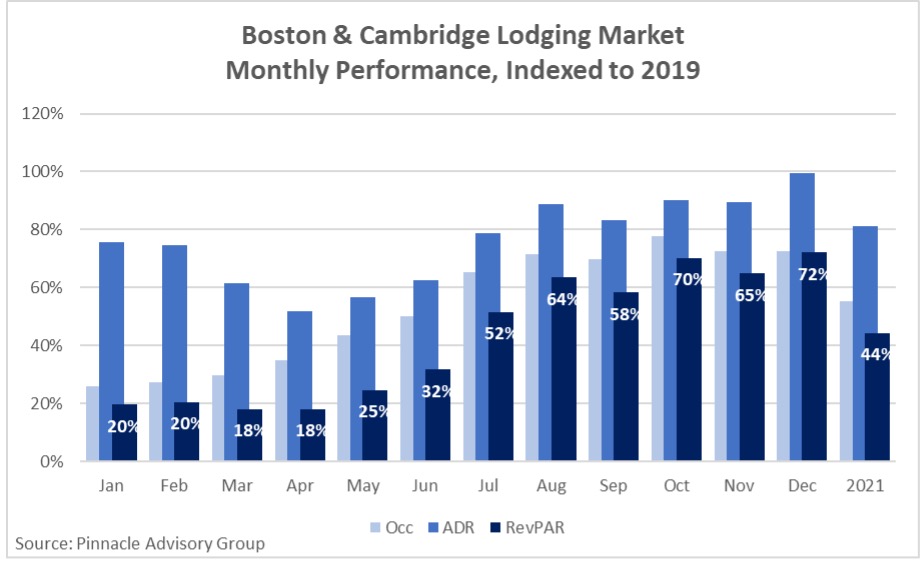 When compared to 2019, the corporate and group segments were down 77% and 72% respectively in 2021. Alternatively, the leisure segment surpassed 2019 levels, exceeding it by over 10%. The market’s contract demand, historically made up of mostly crew demand and by far its smallest segment, now includes a fair amount of rooms being used by colleges and universities for housing students, increased 27% over its 2019 levels.

Outlook for 2022: The Omicron variant, and Boston’s vaccine mandate which followed, combined with slowing economic growth, has negatively impacted the start of the year for the lodging market. As a result, these first winter months look to bring another slow start. The good news is that no matter how long the winter, spring is sure to follow. Hotel owners and operators are still hopeful that renewed optimism driven by slowing case counts and the momentum of the market’s recovery in the second half of 2021 will continue as we move forward into 2022.

Pinnacle Advisory Group has projected the recovery of corporate demand to begin to accelerate in Q2, ultimately reaching 60% of its 2019 level. Driven largely by a strong pace at the convention centers and the opening of international travel, group demand is projected to outpace corporate transient and reach approximately 70% of its pre-pandemic level. Leisure travel is expected to grow even further from the levels achieved in 2021 as inbound international traffic ramps back up and the region hosts events which haven’t been held since 2019 as well as new events such as golf’s U.S. Open Championship. Lastly, hotels are expected to continue contracts with local colleges and universities through the spring semester. Matched with month-over-month gains at Logan Airport, contract demand is projected to maintain levels above those experienced in 2019.

Based on these segmented growth rates, Pinnacle Advisory Group has projected demand to increase 48% from 2021. Although the growth in room supply is expected to slow in 2023 and 2024, the market’s room inventory will increase almost 5% in 2022, its largest increase in six years. Based on these supply and demand forecasts, the market is expected to have an occupancy of 64% in 2022. Average daily rate is projected to continue its trajectory seen in the second half of 2021 and increase 4%, reaching $220. The current inflationary environment should provide additional pricing power and help mitigate the negative impacts as corporate and group demand is layered into a market which benefitted last year from mostly high rated leisure.

Although the projected RevPAR of $141 is a 49% increase from last year, it is still approximately 33% less than its pre-pandemic levels.

As outlined, Pinnacle Advisory Group’s projections for the Boston & Cambridge lodging market assume a continued, slow recovery in corporate transient and group lodging demand and a heavy reliance on leisure. Two years into the pandemic, ADR growth is expected to slow as demand becomes the driver in the recovery to pre-pandemic performance metrics. While the strength of the leisure market contributed to the ADR growth in 2021, significant growth rates in ADR are not expected to occur again until the market has a solid base of group and a reliable flow of corporate transient through much of the year.

While there is much to be optimistic about as we move into 2022, the hospitality industry has become accustomed to surprises. In addition to limited and volatile lodging demand, hotel owners and operators have managed both a challenging labor market and supply chain issues which have created wage pressures and increased operating costs. It is unlikely that we’ll close the book on the pandemic in the near term, but the receding case counts across the U.S. and other countries are encouraging signs for people to make up for lost time and travel, meet, and conduct business.

Sebastian Colella is a vice president with Pinnacle Advisory Group based in the Boston office. With over 20 years in the hospitality industry, Colella leverages his operational knowledge and expertise from experiences in the field. Work with Pinnacle Advisory Group has included market and feasibility analysis, acquisition due diligence, departmental revenue and expense performance evaluations, facility recommendations, brand assessments and impact studies, as well as appraisals of both branded and independent hotels and resorts. Colella is an adjunct professor at the Boston University School of Hotel Administration and received his bachelors of science degree at the School of Hotel Administration at Cornell University.