The Greater Boston economy continued to improve in 2019, albeit at a slower pace than in years past. This slowing growth combined with an increasing supply of hotels negatively impacted performance metrics for the Boston and Cambridge lodging market. Declines in occupancy and average daily rate are worrisome for owners and operators, as well as the many developers eyeing the market. As seen in other economic cycles, strong lodging market performance combined with economic gains, has led to a growing hotel supply. The local market, despite accommodating a record level of room-nights and generating the most lodging revenue in its history, is now in the process of absorbing new rooms entering the market at a faster pace than demand.

The Boston economy has benefited greatly in recent years from expansion of technology and life sciences while relying on its historically more stable sectors, healthcare and education. While the local economy continues to grow, it moved at a slower pace in 2019 than in prior years. Unemployment in the Boston MSA fell below 3% in 2019, making it the tightest labor market in the region since 2000 and restricting growth. Approximately 43,000 jobs were added in the Boston MSA in 2019, less than half the growth experienced in 2018. According to CoStar, the Boston and Cambridge office market had a net absorption of 1.5 million s/f in 2019. While this is a considerable amount of office inventory, it’s a decline from prior years. Even the growth in passenger traffic through Boston Logan International Airport slowed in 2019. Through November, passenger traffic had increased 3.4% over November of last year, a number that has been approximately 6% or above the last four years. While the economy is moving in the right direction, its moving at a slower pace than its peak performance earlier in the cycle.

The lodging market welcomed eight new hotels totaling over 1,400 rooms, increasing the existing supply 3.2% from 2018, and outpacing demand growth of 2.9%. As a result, occupancy declined 0.2% from 2018. In addition to this increased competition, operators struggled to drive revenue growth as the convention calendar had 27% less roomnights and two less citywide events. Additionally, non-recurring events which took place in 2018 such as the Red Sox World Series and the Columbia Gas explosions, contributed to above average rate growth in 2018, which in turn resulted in ADR declines in October and November 2019 of 7.1% and 7.8% respectively. 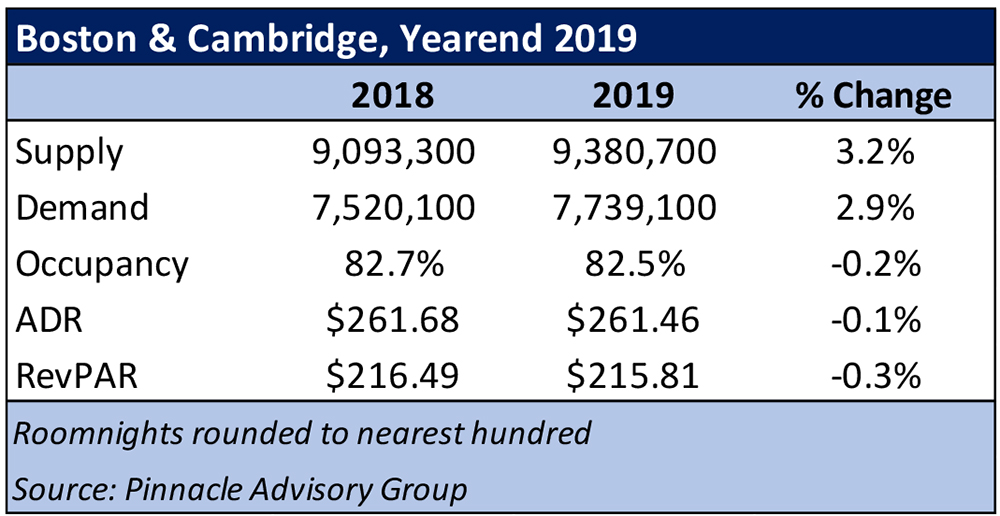 After experiencing declines in both market occupancy and average daily rate (ADR) in 2019, most operators and owners are looking ahead to 2020. While some elements which plagued the market in 2019 will see a correction, one market dynamic that will continue to be a hurdle this year and next is new supply. Six hotels with almost 1,000 new rooms will open in 2020, along with the considerable number of rooms coming online from Q3 and Q4 of 2019. When including the reopening of both The Taj (reopening as The Newbury) and the Langham Hotel, supply will increase 3.8% in 2020, representing the second year in a row with supply growth of over 3% and the second highest increase in rooms supply since the recession.

Demand in the Boston and Cambridge market has increased around 3% the last three years. While supply is expected to outpace demand again in 2020, demand is expected to continue its growth, albeit at a slightly slower pace. As new supply allows for demand growth during peak periods, the market is expected to experience a 2.5% increase in demand. The 2020 convention calendar for the Hynes Convention Center and the Boston Convention and Exhibition Center will bounce back with convention related roomnights up 24% with most significant gains expected in March, May, October and November. Additionally, the number of city-wides will increase from 21 to 25 adding more compression nights to the market. 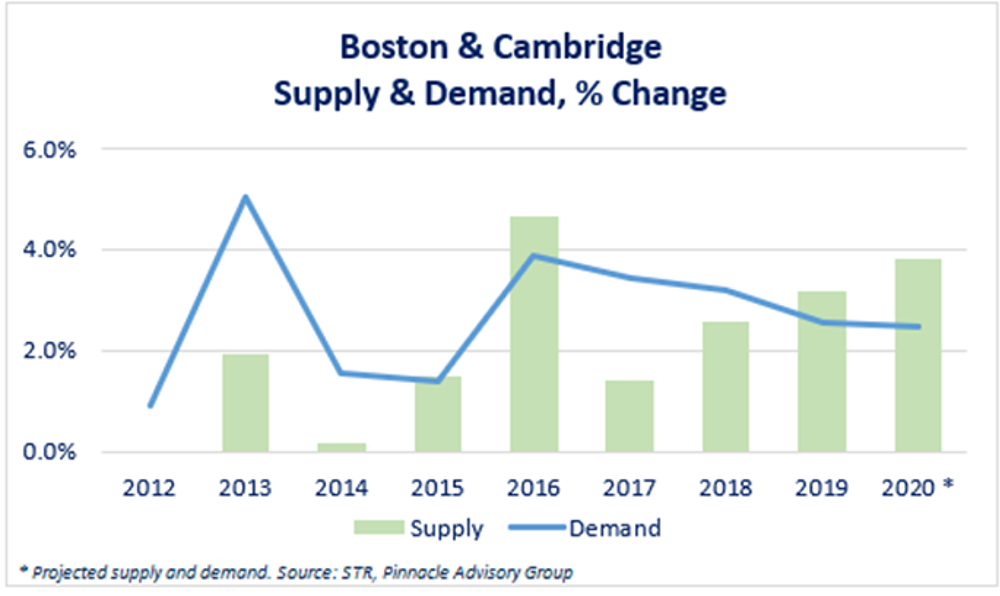 The year-over-year declines experienced in the fourth quarter of 2019 should turn positive in 2020 as the convention calendar allows for added pricing power. Although the market ADR was almost unchanged in 2019, the strong convention calendar and the pattern in which the events fall, especially the citywides, will allow for rate growth of 0.7%. Despite these gains, the market is projected to experience a 0.6% decline in revenue per available room (RevPAR). Given the Boston lodging market’s reliance on international travel, specifically from China, demand could be impacted from the coronavirus outbreak. Our projections do not reflect the potential negative impacts resulting from this spreading virus which has already forced flight cancellations and border closures to Chinese travelers around the world. 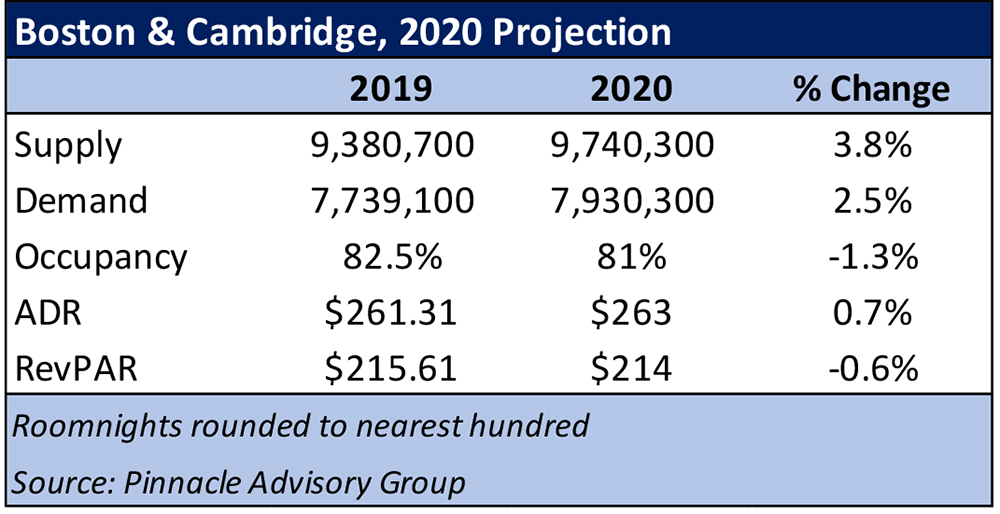 Over the long term, Boston will continue to be one of the strongest markets in the country. Demand growth is expected to continue at a similar pace assuming broader economic trends remain favorable. While most proposed hotel projects will induce new and unaccommodated demand into the market, increases to supply at the levels projected for the next two to three years will mitigate ADR growth. Market occupancy is projected to remain above the 77% long-term average while ADR will fluctuate with increases to supply.

Sebastian Colella is a vice president with Pinnacle Advisory Group based in the Boston office. With over 20 years in the hospitality industry, Colella leverages his operational knowledge and expertise from experiences in the field. Work with Pinnacle Advisory Group has included market and feasibility analysis, acquisition due diligence, departmental revenue and expense performance evaluations, facility recommendations, brand assessments and impact studies, as well as appraisals of both branded and independent hotels and resorts. Colella is an adjunct professor at the Boston University School of Hotel Administration and received his bachelors of science degree at the School of Hotel Administration at Cornell University.