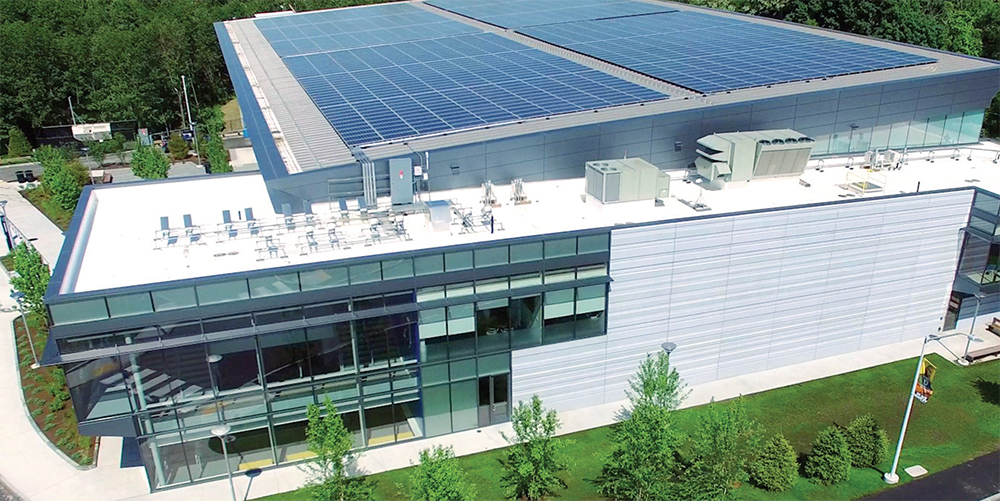 Waltham, MA  As the first community bank to finance a solar project back in 2010, Cambridge Savings Bank (CSB) is recognized as an industry leader in the alternative energy space, making them an easy choice for leading solar development and investment company, Rivermoor Energy, to partner with to finance an industry-leading solar energy system on the roof of the new Bentley University Arena.

“At CSB, we like to think of ourselves as having a unique niche in the renewable energy space, financing 53 solar projects totaling approximately 75 megawatts since 2010, we were excited when Rivermoor approached us about the Bentley University project,” said Michael Kuhn, senior vice president, CSB.

“Hockey arenas really are a great match with an on-site renewable energy system, in this case solar, because you can generate a huge amount of the electricity needed on an annual basis, through the asset right on the roof,” said John Tourtelotte, founder & managing director at Rivermoor Energy, which is providing a ten-year power purchase agreement to Bentley University.

The 1,400 panel, 504 kilowatt solar array, which is designed, developed installed, owned and managed by Rivermoor at no cost to Bentley, is a building-integrated system on the roof of the 76,000 s/f arena.  The solar asset generates 40% of the building’s annual energy needs.

The arena has been named one of the most environmentally sustainable in the nation, and one of the first standalone ice arenas to earn the LEED Platinum certification, a well-deserved recognition backed by Bentley’s long-standing commitment to the sustainability, and according to Tourtelotte and Kuhn, an impressive project powered by collaborative leadership, strong partnerships and creative thinking.

“Bentley’s thoughtful use of solar technology to power a modern, energy efficient arena demonstrates leadership in building design and a model for other universities and companies to follow,” Tourtelotte said, “From Rivermoor’s perspective, as the solar asset owner, we were able to match the objectives that Bentley University had as our client with the underlying financing strategy and solution as a result of all the great work and creative thinking done by Mike Kuhn and his team at Cambridge Savings Bank.”

Kuhn said, “At CSB, we are always trying to think outside the box and find creative and innovative solutions, and that’s the same innovative mindset I saw from Rivermoor and Bentley as well. The project is financially impactful in reducing the lifecycle operating costs of the arena, and the outcome is an incredible, environmentally sustainable arena that Bentley students will continue to enjoy for the next twenty-five or more years.”