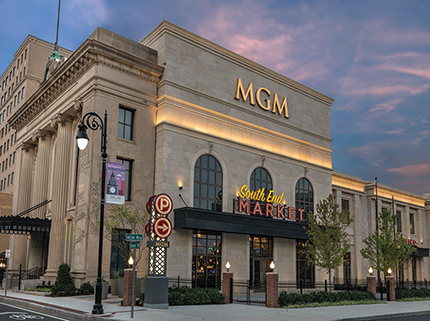 Springfield, MA DeSimone Consulting Engineers provided structural engineering for MGM Springfield, the first and only full-service casino in Massachusetts. This project required challenging preservation and expansion components, including the relocation of a 130-year-old church and two other buildings, both listed on the National Register of Historic Places, to a new location on the site. MGM Springfield is a 400,000 s/f casino and entertainment space with a 150,000 s/f, 250-key hotel.

The hotel and casino, designed in collaboration with Friedmutter Group and DeSimone Consulting Engineers, is situated on a 14-acre historic site that was destroyed by a tornado in 2013. The casino project aimed to revitalize the historic downtown area, where many buildings maintained strong links to history. Close collaboration was required among all design specialties to combine the historic components and new structures. Many of the pre-existing buildings were preserved and incorporated into the MGM Springfield’s façade with design collaboration from Friedmutter Group, the design architect for the project.

To honor the history of existing structures on the site, while also enabling the construction of the MGM Springfield casino, DeSimone determined how to relocate the 450-ton church 200 yards from its original position and rotate the structure 180 degrees over the course of one day.

In addition to the church relocation, portions of two other historic buildings were preserved and incorporated into the new building façade. One of the buildings, a 150-year-old Union Hotel that was visited by President James Polk in 1847, was considered the premier hotel in the city at the time. DeSimone worked to stabilize, re-support, and tie in the existing brick façade to the new building structure.

The Beaux Arts-style, granite façade of 73 State St., the other historic building, built in 1910 for the United Electric Light Co., also was incorporated into the new building. An ornate stained glass dome was salvaged and rebuilt in a prominent location above one of the casino entrances.

The project focused on Springfield’s State Armory building, which  was completely gutted and renovated to include the casino’s feature restaurant and exclusive speakeasy bar. The other building, an existing 10-story office building, remained to house casino operations on the upper floors, while the ground floor was converted to the casino’s main poker room.

To maintain commitments to the city regarding building heights, floor-to-floor heights for the hotel were limited to 10 feet. To avoid mixing structural systems and possibly introducing expansion joints through the middle of the casino, DeSimone proposed creative engineering to maximize space while maintaining aesthetics.

To celebrate the structure and historical past, MGM Springfield, Friedmutter Group, and DeSimone designed the rooms with planks exposed to create an industrial look.