Avon, CT “An incredible canvas to create something that doesn’t exist in this marketplace,” is how Carpionato Group’s Joe Pierik describes the Rhode Island developer’s plans now underway to build its 97.5-acre Avon Village Center in Connecticut.

The project, located nine and a half miles west of downtown Hartford along U.S. Rte. 44 in this affluent bedroom community, has been 20+years in the making.  It is a story of a historic town with a vision, a major corporate landowner with a long local history and a developer not afraid of a big challenge and integrating a community centric approach into mixed-use placemaking.

Avon was settled in 1645 originally a part of Farmington calling Northington. The fertile valley land along the Farmington River, nestled between two mountains was initially a small farming community.  By 1830 following the opening of the Farmington Canal, Avon became a town in its own right. And soon one of the areas first manufacturing companies, the Climax Fuse Company, began to build a campus on what today will become Avon Village Center.

Located along Rte. 44, the Climax Fuse Co. manufactured safety fuse, a type of fuse consisting of a tube of gunpowder surrounded by a water-proofed and varnished jute rope. Over time, the original factory grew into a campus of traditional brick mill buildings located on nearly 98 acres of mostly undeveloped land, and the company became the Ensign Bickford Company. Despite, the presence of Ensign Bickford, a few other small companies, Avon never became a hub of commerce and never established a traditional New England village anchored by retail stores and other commerce.

In the early 2000s town leaders and planners began to ask what if we could create a real town village in the heart of Avon that would become a community hub of activity and commerce for the 21st Century? By then the Ensign Bickford factory was long closed and the land was largely untouched. That campus and undeveloped acreage would become the focus to make the town’s vision a reality.

Between 2010 and 2012, the Ensign Bickford Co. worked with town planners and its leaders to develop a master plan for a mixed-use town center that was ultimately approved. The Ensign Bickford generated Avon Village Center master plan put in place a number of the preliminary steps needed to build a project of this magnitude. The plate was set, however in 2012 Ensign Bickford decided to step aside, and bring the property to market for sale.

Pierik, Carpionato Group vice president of retail leasing and acquisitions, has worked in property development, leasing and acquisitions for more than 40 years. With an incredible network of commercial broker contacts up and down the East Coast, it wasn’t long before he zeroed in on the opportunity in Avon. Joe knew that his boss, the late Alfred Carpionato, (who passed away in 2018), might just think this was a project of scale that Carpionato Group could sink its teeth into.  They made plans to travel to Avon and determine for themselves if this was an attractive long-term investment to bring into the company’s portfolio.

Under Ensign Bickford’s tenure of ownership, Avon Village Center totaled approximately 100,000 s/f in 13 separate buildings. The existing 30+ tenants consisted of retail shops, restaurants and small professional and medical office tenants. Part of the former Climax Fuse factory had been transferred to the Town of Avon for use as the Town Hall following a fire destroying the former town hall in the 1960s. But Carpionato, with incredible success in building Chapel View in Cranston, R.I., as well as other mixed-use developments in the Ocean State and Massachusetts knew there was potential in Avon for so much more.

“We drove to Avon, and spent hours walking the property,” said Pierik. “Mr. Carpionato loved it.  Elements such as the topography, the magnificent views, Nod Brook and the Farmington Valley Greenway multi-use trail meandering through the site and the onsite art center presence identified the property as a hidden gem. And while it was going to take a lot of hard work, time and money, Mr. Carpionato quickly made the decision to buy the property.”

Over the next several years, Carpionato Group negotiated with Ensign Bickford to bring to fruition the sale on the entire 97.5 acres. By early 2015, the Rhode Island developer controlled the property. Pierik immediately set out to work with the town to modify and improve on the previously approved Ensign Bickford master plan. In late 2015, the town council approved a new 1.25 million s/f mixed-use master plan for Avon Village Center. The new Carpionato master plan capitalizes upon the physical and cultural amenities of the site, builds upon the existing retail and office uses, and incorporates 450 new residential units within a walkable connected village environment .

“Mr. Carpionato was truly gifted when it came to creating a vision for a piece of property,” said Carpionato Group president and CEO Kelly Coates.  “He instinctively knew that to unlock value within this property – for it to be truly special – the development couldn’t rely only on Rte. 44. His goal was to open up the entire 97.5 acres with enhanced access via a new road network to create a sense of place that builds upon and enhances the great foundation that was already there.  Mr. Carpionato’s directive was to create something super dynamic on the site that would become a focal point and gathering place for the Avon and Farmington Valley communities.”

“We spent many hours sharing our vision, meeting with and listening to people in Avon to get their feedback on our plans,” said Pierik.  “Many told us other developers had looked at the property over the years but were deterred by the need to create the much needed critical infrastructure – new roads, relocated utilities and community amenities that would allow this property to realize its full potential as a unique mixed-use development.” 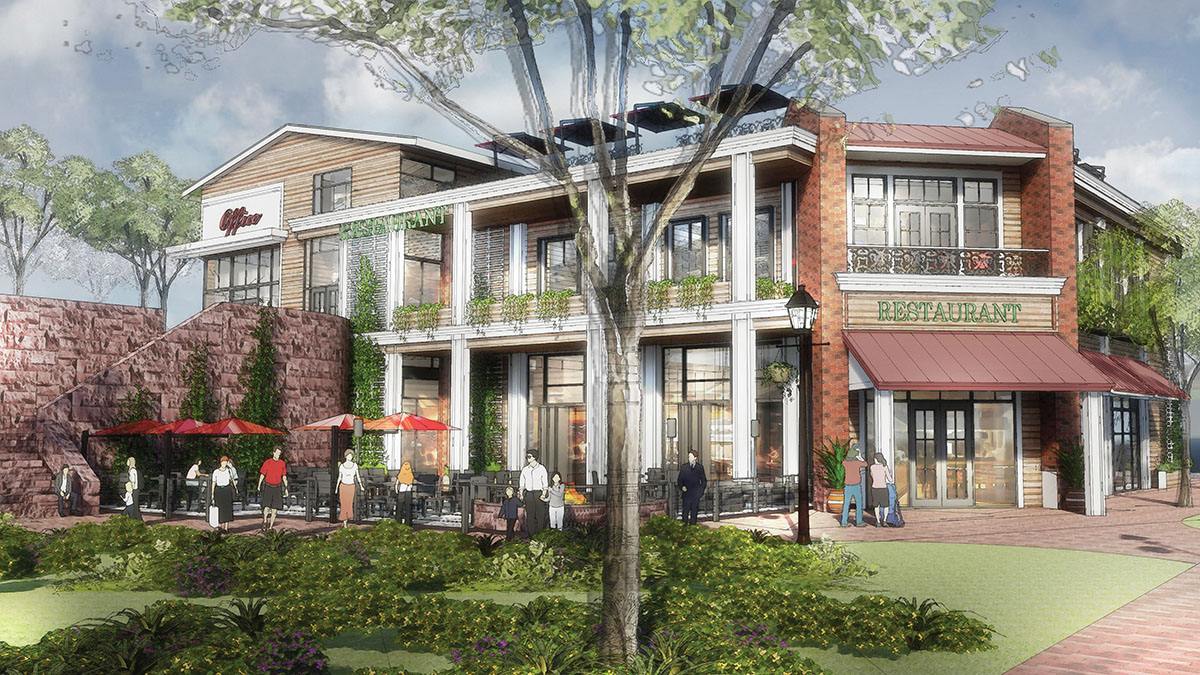 “Given the size of the overall Avon Village Center project, we are taking an incremental approach to building,” said Pieirk. “Once the initial retail is complete, then we will start on adjacent infrastructure and the building of other pure residential and mixed-use apartments, retail space and offices.”

Avon Village Center is being designed as a live-work-shop-play gathering place for the town. It will include a mix of local, regional and national retailers as well as first class professional office and medical office space. With a plethora of large and small public gathering places including a new 15-acre public park, the new village center reflects current shifts in consumer preferences, with an enhanced focus on placemaking and creating experiences that resonate with the community.

“The town was very hands on as we worked with them through the master plan approval process,” said Coates.  “Led by town planner Hiram Peck and Planning and Zoning commission chair Linda Keith, they, along with members of the community generated a tremendous amount of input on the form, design, architecture and traffic design.  This has truly been a collaborative process.”

“Retail today is not the same as it was 10, 20 or 30 years ago,” said Pierik. “The strip centers and enclosed malls constructed in the ’70s, ’80s and ’90s that account for the majority of the area’s current retail offerings have to change.  Today, when people leave their home to go shopping, they want to have an experience that is more than just making a purchase.  Given the rise of Internet retail sales, we can purchase virtually everything with our mobile devices 24/7, so to create a truly successful authentic mixed-use environment we need to do much more.”

“Visitors to Avon Village Center will be able to do just that,” said Coates. “Think about folks taking an art class, enjoying an art show at the Farmington Valley Arts Center, competing in a 5K road race, strolling around a farmer’s market or other recreational activities with the kids. Avon Village Center with a holistic mix of design, architecture and retail/residential/office space offerings will be the place where people can work, shop, dine at a restaurant, visit with friends and relax and enjoy the outdoors with their family. We are working with the incredible existing fabric that’s Avon itself and creating a new community experience that will provide memories for generations to come.”