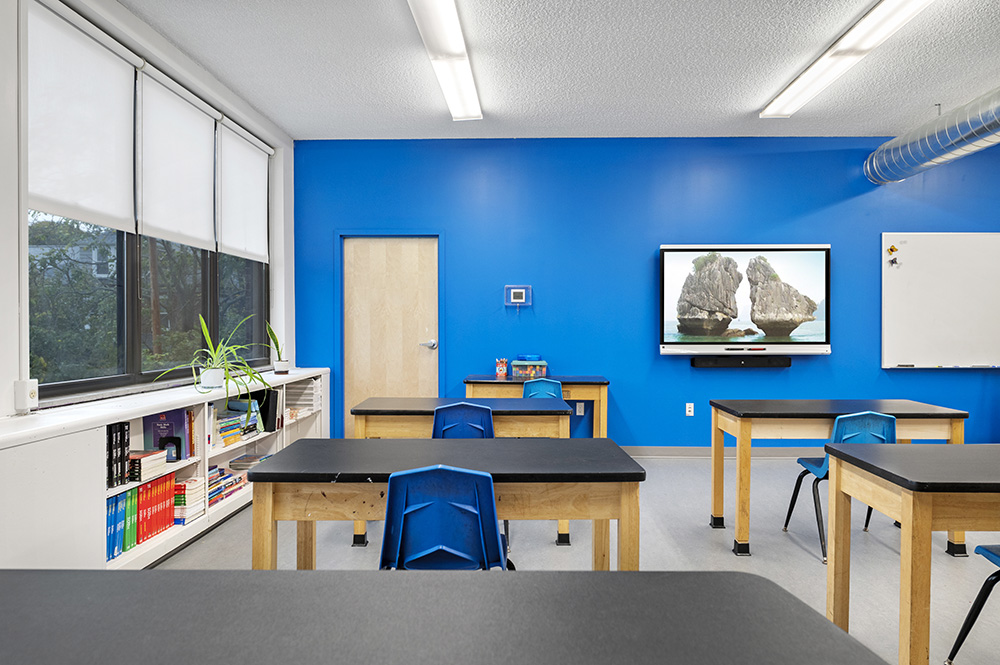 Newton, MA After a years-long search for a new space, the Clearway School finally found its new home in a former parochial school. However, despite its history as a place of education, it lacked the necessary amenities and layout, particularly as it relates to modern teaching practices. To meet its fall opening deadline, the school only had the few weeks of the summer break to get a complete renovation done and worked with Ebbrell Architecture + Design of Boxford, to accomplish the task.

“This was a typical ‘Summer Slammer,’ and we had to get Clearway up and running for when the students returned in September,” said Jessica Cargile, NDICQ, LEED AP and interior designer with Ebbrell. “We stripped walls, re-lamped existing lighting fixtures, updated the HVAC to meet health specs, and revamped the teacher’s lounge, among a lot of other renovations,” Cargile said.

Clearway School administrator Mary Ryan said Cargile’s knowledge of available materials in this supply chain-challenged world really made a difference. “Jess was great,” said Ryan. “She brought forward design ideas and helped me envision the different options. Then she made sure the construction team did exactly what they were expected to.”

Among the major renovations completed was converting larger classrooms into smaller, intimate settings for learning while doubling classroom count. Ebbrell was also able to keep existing sinks in many of the classrooms to use for lab and science learning as well art.

Antiquated chalk boards were removed to lighten and brighten to classrooms and hallways. And existing restrooms were refreshed on a modest budget. The Ebbrell team also created a clean color palette using the school’s signature blue to create a cohesive, calming, modern learning environment. Ryan said, “I’m so glad we listened to them about color. It’s not as stark now with our school blue on the walls and the furniture. It looks great!”

One of the biggest challenges according to Cargile was the existing flooring. “It was a mess, and we decided the best approach would be to go over it with something new,” she said. “We went with a Marmoleum floating floor in most areas and then used Flotex from Forbo in others. That worked out well because Flotex has the acoustics of carpet but the cleanliness of vinyl,” Cargile said.

Cargile, who drew on much of her previous experience as an interior designer working on public K-12 schools said that helping this school that works with learning disabled students meet its needs and allow it to function better in its new space was extremely rewarding.

Ryan said Cargile and the whole Ebbrell team was “Pleasant, down to earth, and incredibly knowledgeable. I love them and recommend them highly.”