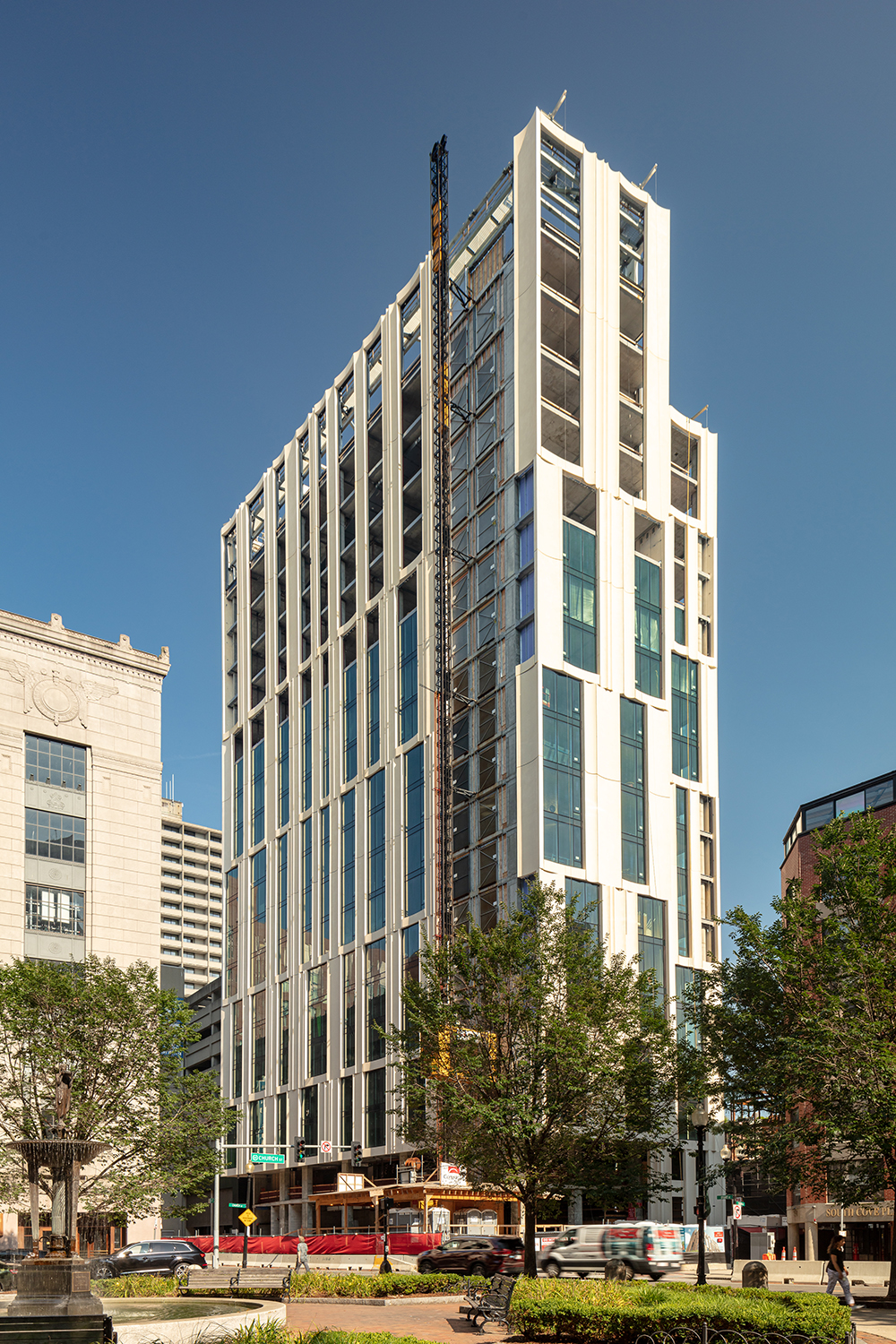 Boston, MA According to Höweler + Yoon and Sasaki, they are nearing exterior completion of the 212 Stuart St. residential tower located in the historic Bay Village neighborhood. The project, which broke ground in March 2020, was carried through the permitting process by Transom Real Estate and is currently being developed by Greystar. The building rises on a 7,714 s/f parcel located within the city’s “High Spine” which connects downtown to the Back Bay neighborhoods. Höweler + Yoon serves as the design architect and Sasaki is the architect of record. 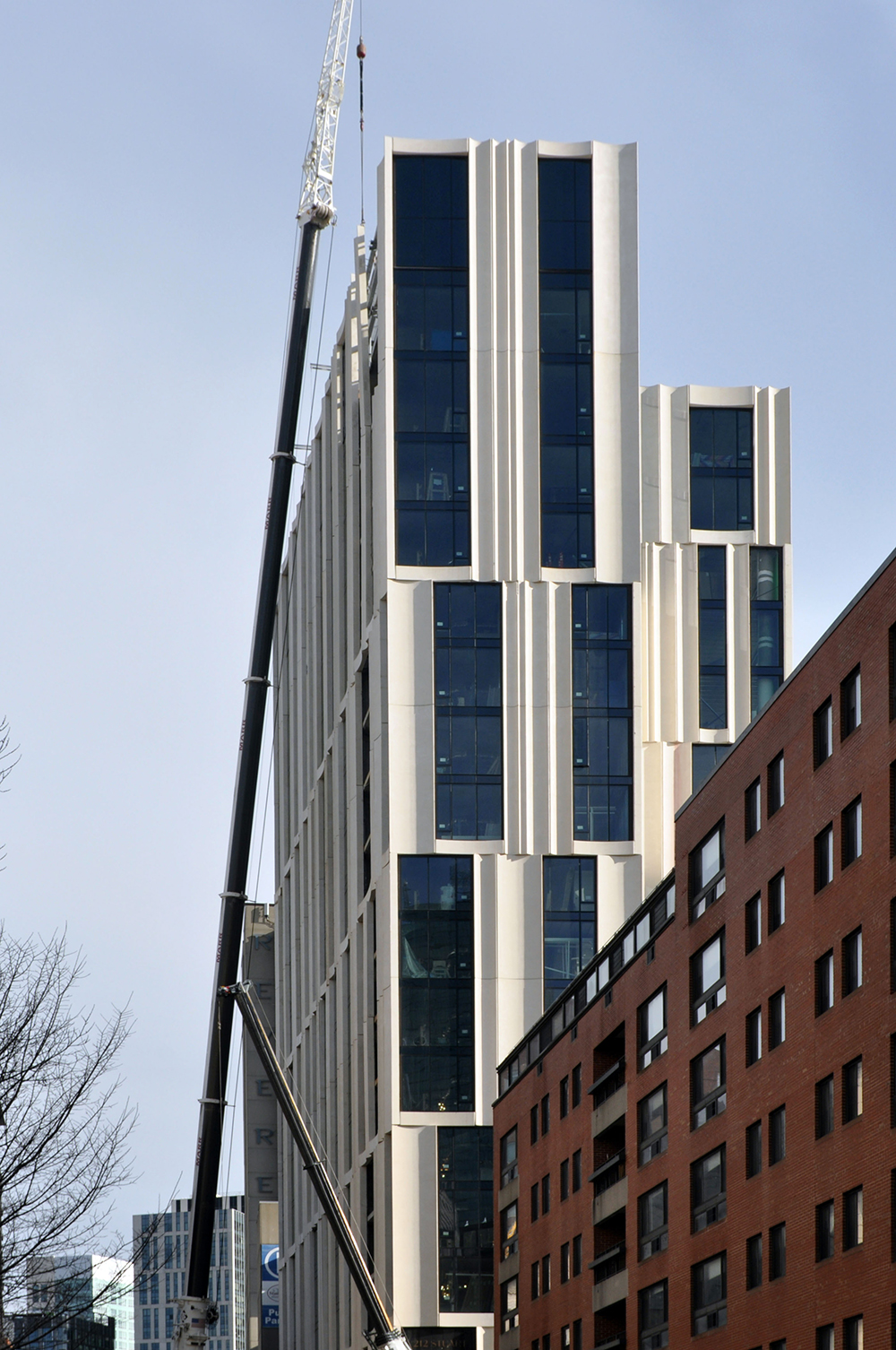 The 150,000 s/f, 19-story building contains 126 units with two townhouses and retail space on the ground level, where landscape improvements will define an entrance to the Bay Village neighborhood and contribute to a leafier, more pedestrian-friendly experience at the ground level.

The building’s form reflects its location. With one side bookending Bay Village’s historic townhomes and the other in dialogue with the high rise character of the High Spine, the design links these two iconic parts of Boston’s cityscape.

“Context, here, is everything,” said Sasaki principal Victor Vizgaitis, AIA. “The entire genesis of the project came from looking for a way to moderate between two markedly different areas of the city.”

The tall, narrowed façade of 212 Stuart St. mirrors the façades of other High Spine buildings, while from the south, the solid-void rhythm of the building’s façade echoes Bay Village’s iconic brick buildings. The building’s two townhouses complete the street to the south, creating opportunities for interaction and connection between neighbors on the ground floor.

“The design of 212 Stuart St. is rooted in the idea that the tall building operates at multiple scales in the city,” said Höweler + Yoon principal Eric Höweler, AIA. “When viewed from a distance, the building meets the sky with a distinctive silhouette and participates in the iconic composition of the city’s skyline. When experienced from the sidewalk, the building contributes to the quality of the local Bay Village streetscape.”

The project’s location presented a number of design constraints, including its tight urban context, which the design team saw as an opportunity to innovate. Moving away from the more traditional all-glass high rises in the city, the team sought to bring quality and depth to the façade through the panel design. The building’s façade consists of fluted piers (locally fabricated by BPDL) that give the tower a solid appearance and resonate with the masonry detailing of nearby historic structures. The irregularly-spaced concave panels and multi-story, recessed glass infill panels emphasize the building’s verticality. Glazing for the residential units takes the form of a floor-to-ceiling window wall with spandrel glass at the concrete slabs. The wall panels, typically either 20 or 30 feet high, incorporate single, double, or triple concave profiles.

The small, urban site required close coordination between local construction trades and the time-sensitive construction schedule to minimize the disruption in this bustling part of the city. The panels were carefully tagged and ordered at the plant and loaded onto trucks in the exact sequence they would be installed. At the site, the panels were picked by crane directly from the truck and hung on the building, saving a time-consuming staging process. The thickness of the panels range from 12 inches at the ends to five inches at the center which allows for dramatic depth and shadow while also allowing for the facade to be partially self-shaded.

The subtle relief texture of the facade creates a unique optical effect and changes as the building is viewed from multiple vantage points throughout the city. The scalloped geometry also references the rich limestone detailing found throughout the adjacent context.

“Considering the explicit historical concern in the neighborhood, we studied fluted geometries as a way to express depth and texture on the facade. The fluted columns themselves were constructed by stacking individual sections around a central core,” says Höweler. “This part-to-whole relationship satisfies the drive to maintain historical character, and yet the results are surprisingly contemporary.”

The facades will be fully enclosed this winter and interior work will continue through the spring of 2022. The building is expected to be complete by early summer 2022.