Originally constructed in phases beginning in 1898 at the corner of Summer St. and East First St., the former coal-fired power plant was expanded and operated for more than a century before being decommissioned in 2006. Hilco and Redgate purchased the site in 2016 and have undertaken a robust multi-year community planning and review process.

The redevelopment will reuse four historically significant turbine halls and create 1.68 million s/f of mixed-use development situated on 15.2 acres along the Reserved Channel. The project incorporates resilient site design along the waterfront and improves traffic, transit and pedestrian infrastructure in and around the site, while building new office, retail, residential, civic, and R&D/lab space, with associated parking. 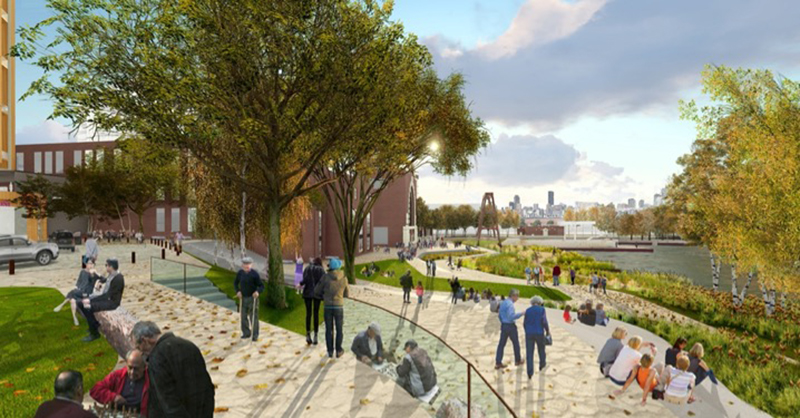 In addition to providing needed housing, public open space and employment opportunities, the project’s commitments involve many other unique public benefits for the South Boston community, including more than $10 million to the MBTA to improve transit service and safety in the neighborhood, a $1.75 million commitment for improvements and operations of Medal of Honor Park and Christopher Lee Playground, a $1 million perpetual scholarship endowment for South Boston college students, commitments for trade apprenticeships and internships throughout the duration of the development, 16% of housing units to be provided at affordable or workforce income levels, priority access and below-market rents for local and disadvantaged small business retailers, and access to 120 parking spaces for local residents free of charge on nights, weekends and during snow emergencies.

“This milestone marks a years-long community review process, throughout which our plans for the redevelopment were revised and improved,” said Ralph Cox, principal at Redgate.

Ben Spera, partner with Hilco said, “We are thankful for the thoughtful feedback from South Boston residents, elected officials, community advocates and neighbors who have long imagined the potential of the vacant site.”

“We’re grateful to the South Boston community, its leaders, and the BPDA for supporting our vision to transform this abandoned site into a modern and sustainable district that will create jobs, housing, and community-friendly spaces for the South Boston neighborhood,” said Melissa Schrock, Senior Vice President of Mixed-Use Development at Hilco Redevelopment Partners. “This is a complex adaptive reuse redevelopment of an obsolete industrial site that has been inaccessible to the public for over 120 years. Thanks to the valuable input we’ve received, we look forward to reinvigorating the property for generations to come.”