Keeping up with the city of Portsmouth - by Stephen Bergeron

In recent decades, the city of Portsmouth seems to have changed more drastically than any other community in New Hampshire. Before discussing some of these changes, I thought it would be interesting to note some of the demographic characteristics that make Portsmouth unique. The city’s population is 21,796, making it only the 13th largest city in terms of size. However, a total of 32,766 individuals are employed in the city (city of Portsmouth Economic Development). According to the Pease Development Authority, 245 companies employ 10,000 in the Pease Tradeport’s 4 million s/f of commercial space. Perhaps the most interesting statistic is that Portsmouth is home to 30,615 restaurant seats, or 1.4 seats per resident (Portsmouth Health Inspector).

In recent years, several new commercial construction projects have been proposed, placed on hold, held up in litigation, and redesigned in the city. Even as a 24-year resident and commercial appraiser in Portsmouth, I have a difficult time keeping up with the latest changes and new projects. I originally intended to write this article about new projects throughout the city, but realized that between downtown, the Gateway District, the revitalized West End, and the Tradeport, that I would have to limit this article to just one neighborhood. Therefore, I decided to focus on downtown Portsmouth.

The commercial project that has received the most attention in recent years is the redevelopment of the McIntyre Federal Building. The city of Portsmouth is scheduled to acquire this 2.1-acre property at the center of downtown from the General Service Administration (GSA) through the Historic Surplus Property Program. Following a competitive bidding process, this public/private partnership was awarded to Redgate/Kane. However, most recently, a new City Council was elected that includes several new councilors who are in favor of a smaller project. This redevelopment now remains somewhat in limbo.

On an adjacent 0.73 acres between Daniel and Pleasant Sts., Mark McNabb, the owner of eight other buildings downtown, is close to receiving final approval for the development of a 21,000 s/f renovation and new 60,000 s/f contemporary style retail-office building to be known as Brick Market. This project will feature underground parking, ground floor restaurants and retail, upper-level office, and community spaces that connect with Market Sq. This unique project will provide outside dining and performance spaces, enhancing the walkability of the streets surrounding Market Sq.

Heinemann Publishing, one of the largest employers in downtown Portsmouth, has signed a lease to be the main tenant at 111 Maplewood Ave., a proposed 74,000 s/f four-story office building currently being developed by The Kane Company. Unlike many other New Hampshire downtowns, which lack activity after 5pm, downtown Portsmouth is most active during the evenings and weekends. These new office projects will be a welcome addition, providing much needed 9 to 5 employment and pedestrian traffic in the downtown core.

At 135 Congress St., a $10 million renovation of the circa 1905 YMCA building is underway by Peter and Michael Labrie. The completed building will feature a 600-person performance venue, restaurant, and contemporary art museum. To date, the building’s front façade has been restored and development of a multi-story glass atrium is underway.

In 2016, Deer Street Associates (DSA) proposed a five-lot master development that was to include a mix of lodging, retail, office, and residences just north of Market Sq. Although the nearby 600 space Foundry Municipal garage has been completed, none of the new DSA construction has begun.

Boston-based developer Cathartes is putting the finishing touches on a 152,000 s/f 143-room AC Hotel by Marriott. This will be downtown Portsmouth’s fifth major hotel. This new hotel, scheduled to open this month, will feature 8,000 s/f of meeting space and a rooftop bar. Although several hotels have been developed in recent years, downtown Portsmouth still lacks a major event center.

As demonstrated by the range of projects that are taking place simultaneously in this small downtown market, significant changes are in the pipeline. Residents and visitors have some exciting new retail, office, hotel, and redevelopment projects to look forward to in downtown Portsmouth. 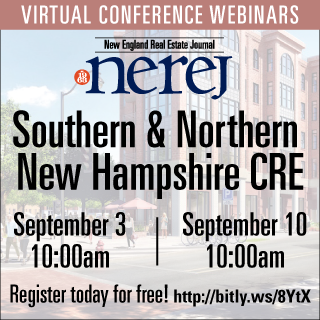