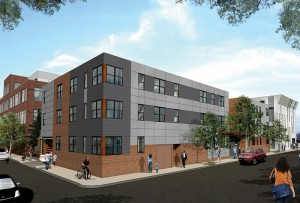 Capstone Communities and Hope Real Estate Enterprises, both Cambridge-based, are co-developing the project – Port Landing – on a vacant 10,000 s/f lot. In 1998, the Bulfinch Companies, deeded this strategically located property to a local neighborhood group. The deed required that it could only be used for specific community-serving uses, but the land remained undeveloped and vacant for nearly 17 years.

Keith Construction is the contractor and Prellwitz Chilinski Associates is the architectural firm on the team.

The $9 million project broke ground in early August. It will be completed in the summer of 2016.

Specifically, Port Landing is located at 131 Harvard St., at the intersection of residential and business neighborhoods. This is a key transition area between the emerging life science and technology hub of Kendall Sq. It is adjacent to Biomed, across the street from a city-owned park and within walking distance to Inman Sq. and Central Sq.

Port Landing will be a three-story wood frame building with an elevator. The ground floor will have six residential units and a small management office, and the second and third floors each will have seven residences. One unit will be handicap accessible and one will be equipped for a household with sensory impairment.

“Port Landing will provide high quality apartment homes to hard working families who have been priced out of Cambridge, said Capstone principal Jason Korb. We are excited that MHIC is partnering with us on this vital community development initiative.”

According to principal Sean Hope, Port Landing’s rents will be 70% less than comparative market rate developments, but the building will maintain the highest standards for its residents.

“The need for affordable rental housing in Cambridge is acute and, in this case, we had a chance not only to add new family housing, but also to help implement a community vision, said MHIC president Joe Flatley.

Other sources of financing include:

• $4.9 million on bond funding issued by MassDevelopment, with the bonds purchased by Cambridge Trust Company;

• $2,162,934 loan from the Cambridge Affordable Housing Trust Fund for construction;

• $784,861 loan from the Cambridge Affordable Housing Trust for acquisition.