Boston, MA Mayor Martin Walsh joined construction and development firm Skanska, and members of the Seaport community for a public block party event to celebrate the grand opening of Harbor Way, a 70-foot wide pedestrian promenade with 20,000 s/f of tree-lined open space and retail between Skanska’s 101 Seaport and 121 Seaport office developments. To commemorate Skanska’s #SeaportShipwreck discovery during the construction of 121 Seaport and the rich industrial history of the neighborhood, Harbor Way features an interactive walking museum that includes a digital library of historical photos, maps, and information, and a phone app with augmented reality (AR) functionality.

The event also celebrated Skanska’s rounding off of city’s most sustainable block with the completion of 121 Seaport. 121 Seaport is a 17-story, 400,000 s/f, class A, LEED Platinum office building, which is 100% leased to PTC and Alexion Pharmaceuticals. The office tower, designed by CBT, sits above two stories totaling 50,000 s/f of retail that will come online in 2019. This block is also home to Skanska’s 101 Seaport and Watermark Seaport developments. 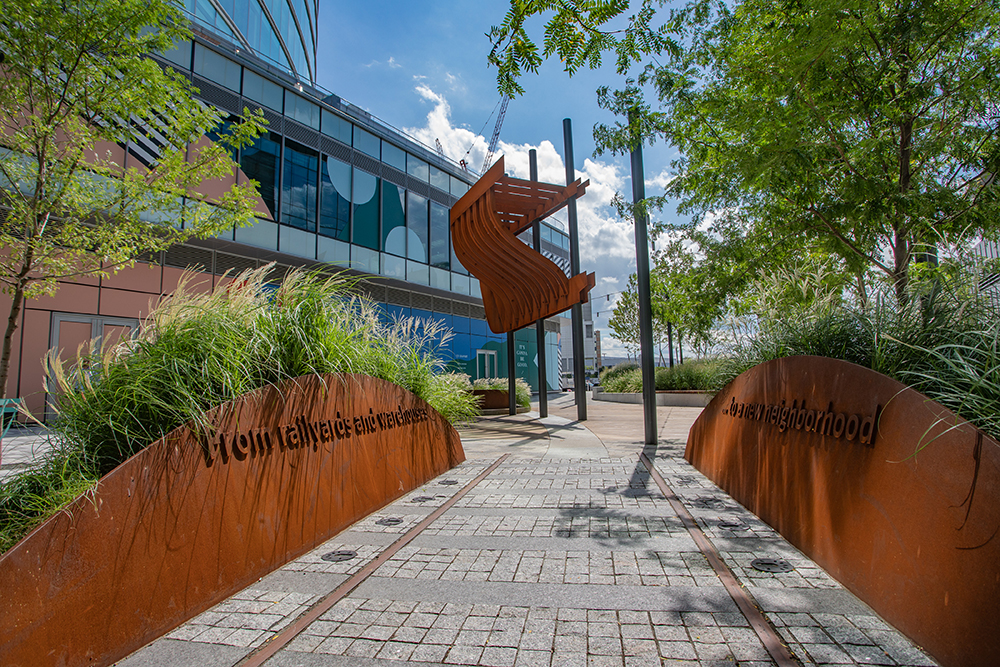 “The opening of Harbor Way creates another accessible open space in the Seaport for residents and visitors to enjoy,” said mayor Walsh. “As the neighborhood continues to evolve, the walking museum helps preserve the important history of Boston's waterfront.”

“With each development we deliver, we aim to contribute to the public realm in a sustainable manner that respects the neighborhood in which we are working. In this case, we are honoring the Seaport’s history with a public amenity, while reflecting the spirit of the Innovation District with a digital library and AR app,” said Charley Leatherbee, leader of Skanska’s commercial development operations in the city. “The Seaport’s development has been a great success and we are proud to be a large contributor.”

At the event, guests explored Harbor Way while enjoying samples from surrounding local retailers. WS Development, master developer of Seaport Sq. and owner of the retail bordering Harbor Way, plans to extend the community space north to Seaport Common and the water, and south to Summer St. by way of a continuous open pedestrian promenade.

Harbor Way’s interactive walking museum highlights milestones from past centuries through Skanska’s 2016 discovery of the #SeaportShipwreck and explores the following themes:

• How this area of Boston was once a tidal flat, and how the ship Skanska discovered in May 2016 came to rest a few blocks inland;

• How city planners filled land over the former tidal flat in the nineteenth century, burying the ship;

• The Seaport’s industrial past and evolution, and how a railroads and warehouses once dominated the neighborhood;

• The artifacts archeologists found within the ship; and

• Facts about the ship’s last voyage, believed to be from Rockland Maine to the South Boston Flats

“Skanska set the bar high in terms of doing the right thing when working on any development / construction site,” said city of Boston archaeologist Joe Bagley. “We are thankful that Skanska brought the discovery to our attention and has honored it in such a meaningful way.”

Reflecting the innovative spirit of the Seaport District, the Harbor Way phone app incorporates an AR feature which utilizes software developed by PTC, the anchor tenant of Skanska’s adjacent 121 Seaport building. The app provides a more detailed, virtually guided tour through Harbor Way for those interested in additional information along each stop. For those who do not wish to download the app, the five “stops” along the park provide a succinct overview of the area’s history and Skanska’s ship discovery, and the digital kiosk provides a wealth of historical content. Local landscape architecture firm Copley Wolff Design Group, and experiential design firms Trivium Interactive and Amaze Design contributed to the design and activation of Skanska’s Harbor Way.