Easthampton, MA According to the principals of SolaBlock, LLC, the company’s revolutionary building product, the “Solar Masonry Unit” or SMU, is proceeding toward market availability in the Northeast U.S. during the middle of 2020.

“The Solar Masonry Unit is a tremendously exciting product - a robust concrete building block with a high-efficiency photovoltaic cell bonded into one face,” said SolaBlock co-founder Patrick Quinlan. “It installs like a brick and generates electric current from the sun, while being a truly integral part of any structure or wall. Because the SMU can be installed vertically, the exteriors of city buildings can now become their own immense solar fields, right downtown, where there’s no room for conventional ground- or roof-sited solar arrays.”

Quinlan is an entrepreneur with an extensive background in solar and renewable energy engineering. He perfected the SMU concept in partnership with union mason Jason Laverty. Their project began in 2012 and in late 2019, the products were submitted for formal testing. 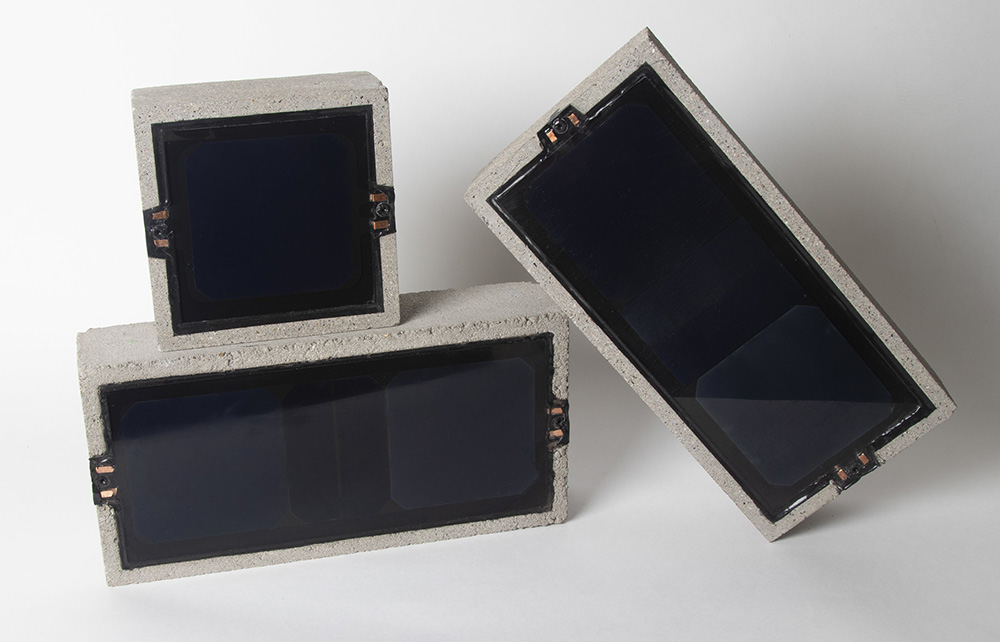 “National and international building codes require that all products used in construction must be tested and meet applicable industry standards,” said Quinlan. “We’re pleased to report that the blocks themselves meet or exceed the compression strength, absorption and dimensional requirements for ASTM C90-16a.”

Remaining tests on the electrical connectivity are in progress currently. If the expected approvals are received, full-scale production will follow by mid-year.

“This innovative SMU block is already price-competitive with brick and similar construction materials yet has the immense additional advantage of generating solar electricity on-site, for no additional cost whatsoever once it’s wired in,” said Laverty. “They are ideal for all new construction, especially projects with energy-efficiency mandates such as schools, universities and large urban developments.”

SolaBlock formally unveiled its first working demonstration wall in October 2019 in Chicopee Mass. to facilitate viewings by interested elected officials, engineers, architects, construction planners and others. A second installation is planned for this year in Lexington Mass.

Quinlan and Laverty are initially concentrating on manufacturing the SMU blocks entirely within Massachusetts. The SolaBlock, LLC headquarters is in Easthampton MA, with panel makers in Pittsfield MA and electrical connector suppliers in North Adams MA. A regional concrete products firm, R. Ducharme of Chicopee, has been designated as the first scale maker of the core concrete blocks.

Dean Ducharme, manager of the concrete fabricator, has observed the ongoing refinement of SolaBlock products in recent years, saying “I’m truly amazed by the concrete product innovation going on here in western Massachusetts.”

In the mid-1970’s, in response to the oil crisis, the now-familiar insulated concrete block was invented at R. Ducharme when one of their workers stuffed his empty foam cup into a two-hole block. The company refined that idea, and soon afterward, insulated block was selling all over the United States.

“Now 50 years later,” adds Ducharme, “we see SolaBlock, another outstanding product, being invented, developed and manufactured locally. SolaBlock will have an immense impact on the block industry, by creating solar power on-site, and helping to protect our environment. It’s something tremendously special that will be arriving in the marketplace at the right time.”