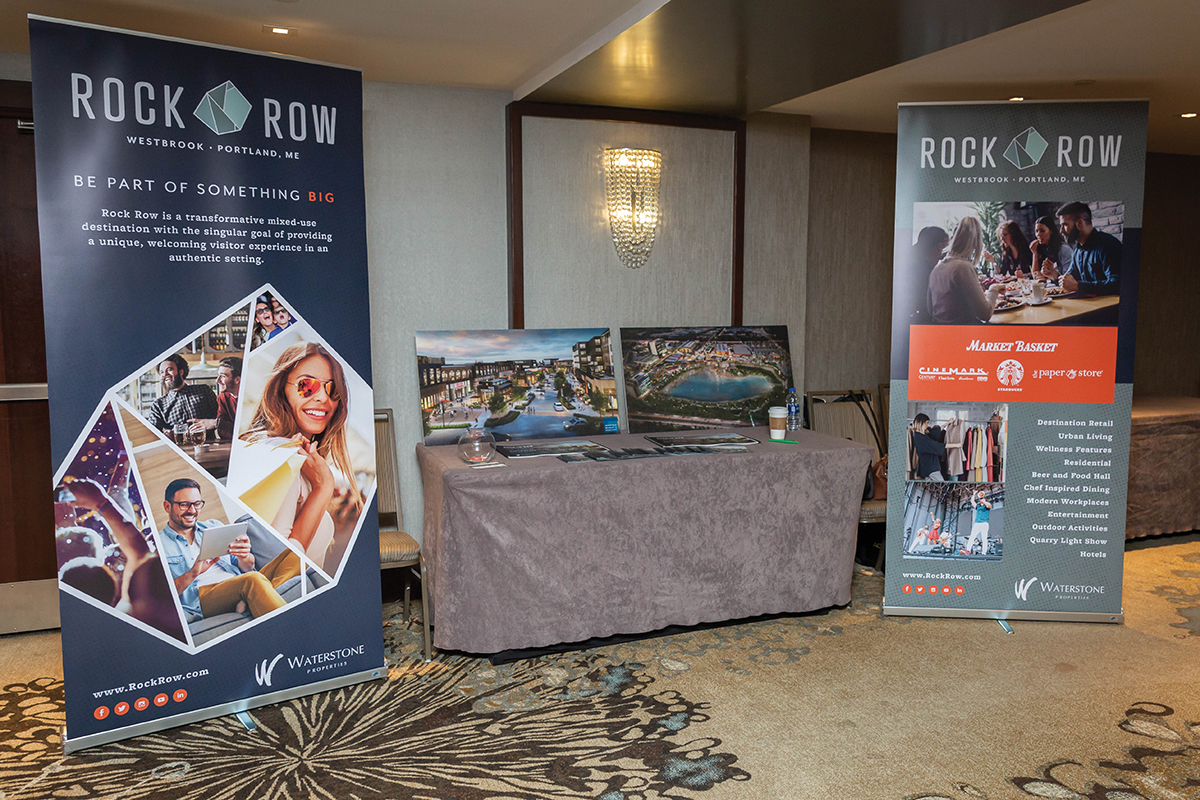 The first panel was held from 9 - 10 a.m. and was moderated by Rick Kaplan of NEREJ. Speakers included: Josh Levy of Waterstone Properties Group; John Sokul of Hinckley Allen; Ed Suslovic, a sustainable development advisor; and Jerre Bryant, city administrator for the City of Westbrook. The panel discussed the Rock Row Development.

The Rock Row Development is a 3-phase project located in Westbrook. Once completed, it will include:

With regards to some of the critical structuring issues that they are running into, Sokul noted it has been with scheduling, sequencing, financing and how they legally will have to deal with the railroad, gas lines and the quarry.

Suslovic discussed the sustainable elements that have gone into the development, including community engagement. More specifically he noted Rock Row focuses on public transportation, not only onsite, but also working with local agencies. It also includes trails on the property connecting with others nearby. He said how a mixed-use element is very important, due to the demand for housing.

Sokul shared some of the key lease provisions for tenants coming into Rock Row. These include: Co-tenancy, site plan approvals, permitting, parking, signage and visibility.

With a project like Rock Row, it is sometimes difficult to find the first new tenants to occupy the space. The turning point, according to Levy, was the addition of the concert venue by Live Nation. After that, stores including Market Basket and The Paper Store joined the line-up, as well as more restaurants. The beer and food hall will be a perfect spot for new chefs to start, because the spaces are smaller, so it is low risk and low capital to focus on. It offers a more fast-casual concept.

Phase I will be completed in May of 2020 with the opening of Market Basket, The Paper Store, Starbucks and more.

In regards to the state of the market, Vogel explained that they are very busy with a lot of interest going on, but companies need to become a little more creative. ”Construction costs have been a factor, but fortunately interest rates have been low enough, that there is more room on the financial side of the project.”

Veroneau mentioned one of the biggest issues he is seeing is the increased cost of parking.

On the topic of opportunity zones, Veroneau remarked that one of the flaws is, “A lot of the land in these opportunity zones may be owned by long-term owners, so they can’t be redeveloped.”

French noted that one of the things he is seeing starting to impact construction costs are tarriff’s. A few examples were light fixtures and air vents on roofs. They are being made in China, so they are being taxed. There is a lot more effort on the construction manager’s part now, and he suggests to bring them on early for a new project.

Vogel spoke about his involvement with the Maine Real Estate & Development Association (MEREDA). MEREDA promotes fair and responsible development and ownership of real estate throughout the State of Maine. He got involved with them because one of their guiding principles is predictability. Developers want to know what the cost will be and the rules, and not have the project change midstream. Another economic incentive is tax credits.

A lot of the things that attract young people to Portland, developers are trying to create in other Maine cities, such as Bangor, Waterville and Brunswick. French and his company are involved in the Colby College redevelopment.

Overall, the panel agreed there isn’t much of a slowdown in the state. The hospitality industry and residential remain strong, and demand is healthy.

The New England Real Estate Journal would like to thank the following sponsors for this event: