Analysts at Lodging Econometrics (LE), the global leader for hotel real estate intelligence, have seen the United States hotel construction pipeline projects increase an extraordinary 83% over the last decade. This has led to a flourishing New England hotel construction pipeline. At the close of 2010, there were 90 projects/12,357 rooms in the New England hotel construction pipeline. At the end of the third quarter of 2019, New England’s pipeline reached a 10-year all-time high of 161 projects with 19,574 rooms (see Chart 1). This is a whopping 79% increase over the 2010 project total. In fact, New England is on track to close-out its seventh consecutive year of having over 100 projects in its pipeline. These robust pipeline counts have allowed for a total of 209 hotels/22,575 rooms to be added into the open and operating hotel supply base in New England since 2010. LE is expecting another 67 hotels/8,321 rooms to open by the close of 2021. 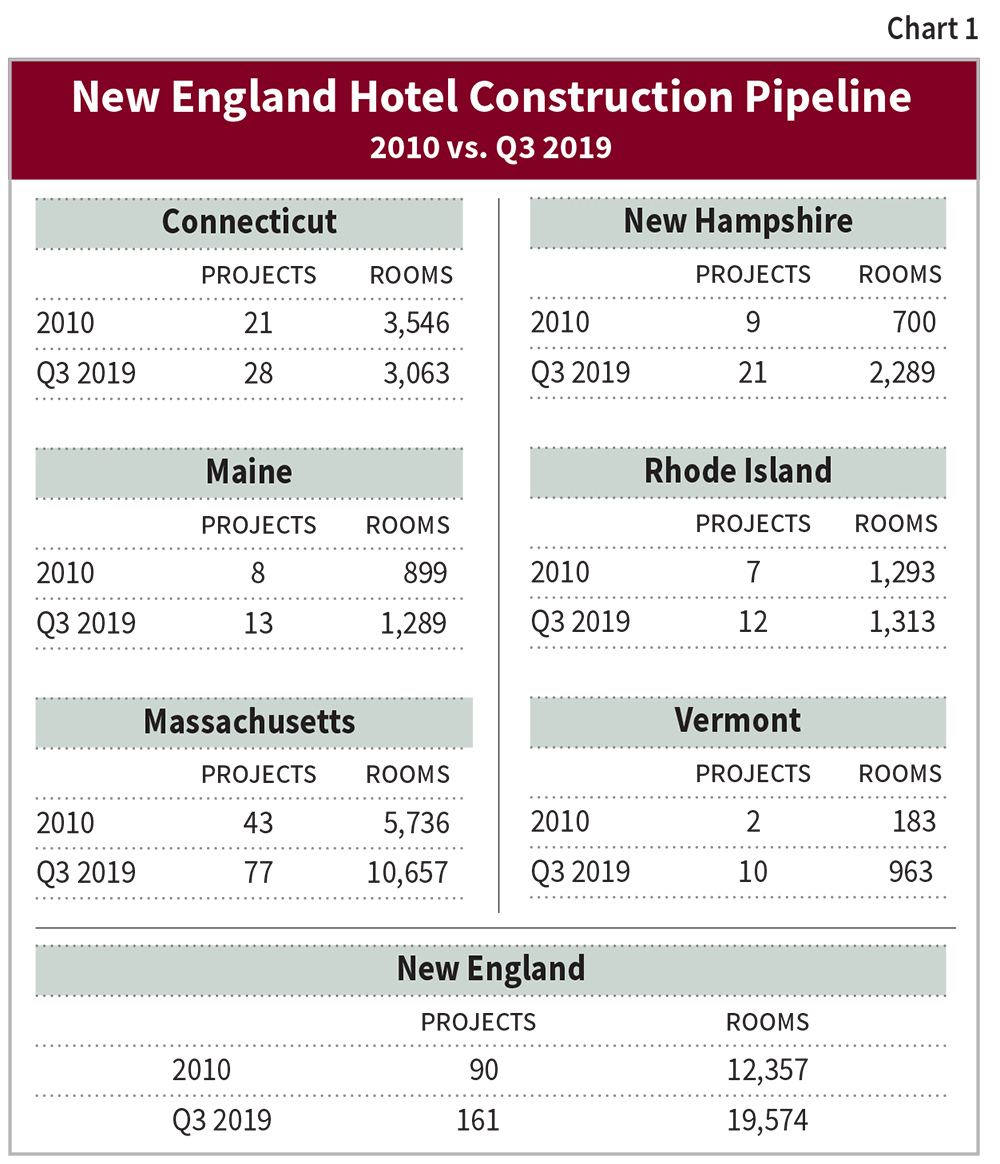 Over half of the new hotels that have entered into the supply in New England, since 2010, can be found in Massachusetts which had 108 hotels open, followed distantly by Maine with 32 and then Connecticut with 25. The most preferred brands by developers that have been built within the last decade include: Hampton by Hilton with 27 hotels/2,686 rooms; Residence Inn by Marriott with 20 hotels/2,539 rooms; Homewood Suites by Hilton with 16 hotels/1,699 rooms; Fairfield Inn by Marriott with 12 hotels/1,199 rooms; and Courtyard by Marriott with 10 hotels/1,119 rooms.

Branded hotels have attracted the most investor interest and account for 58% of the hotels sold in New England since 2010. The brands that have sold most frequently during this time period are Hampton by Hilton with 26 hotel sales, Residence Inn with 19, Courtyard by Marriott with 16, Choice’s Comfort Inn and InterContinental Hotels Group’s Holiday Inn both with 14 hotel transactions, followed by Choice’s Quality Inn & Suites with 13 hotels sold (see Chart 2).