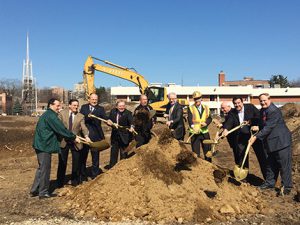 “The current police station is outdated and too small for our police department. A new police station is long overdue,” said Mayor Martin. “Our police are some of the finest in the state and they deserve a safe, modern building that will fit their needs for decades to come. Thank you to the board of finance, board of representatives and the Stamford community for their support, and thanks to Mike Handler, Lou Casolo and our engineering department for their commitment to this project and getting us to the groundbreaking today.”

The three-story (four floors), 94,245 s/f building will be occupied by all specialty police units including the vehicle maintenance garage that was a separate building at the current police station. The new police headquarters will include parking for the entire fleet, thus providing the public with on-street parking around the building. The building will be a community-friendly structure with glass walls, better access for the disabled, and a community area in the lobby which the police are planning to use for various public and community activities.

“Thank you to mayor Martin for taking on this important project as soon as he took office. He understands that our excellent police force has outgrown their current building and requires a modern building that will allow them to do 21st century police work. This new police station will be a community asset, with a more welcoming exterior and community-friendly rooms, to help strengthen ties between the police and residents,” said Jankowski.

“We are very excited that this project is moving forward and thank the mayor, who has listened to the Department’s policing needs and concerns, and is investing in us to the benefit of our growing city. Our current police headquarters has long outlived its usefulness. We will soon have a new police headquarters that reflects modern community policing that will help us better engage with residents, a priority for the Stamford police department. With our new facility, we will also be able to house all of our departments and units under one roof, which will increase efficiency,” said Chief Fontneau.

O&G Industries has been awarded the contract for this project and has already started work. The new police department headquarters was designed by Jacunski Humes Architects with Brian Humes as the architect. It is anticipated that the construction will take about 24 months and is estimated to cost $43 million.