Project of the Month: Colantonio Inc. completes $15m restoration of the historic senate chamber of the Mass. State House 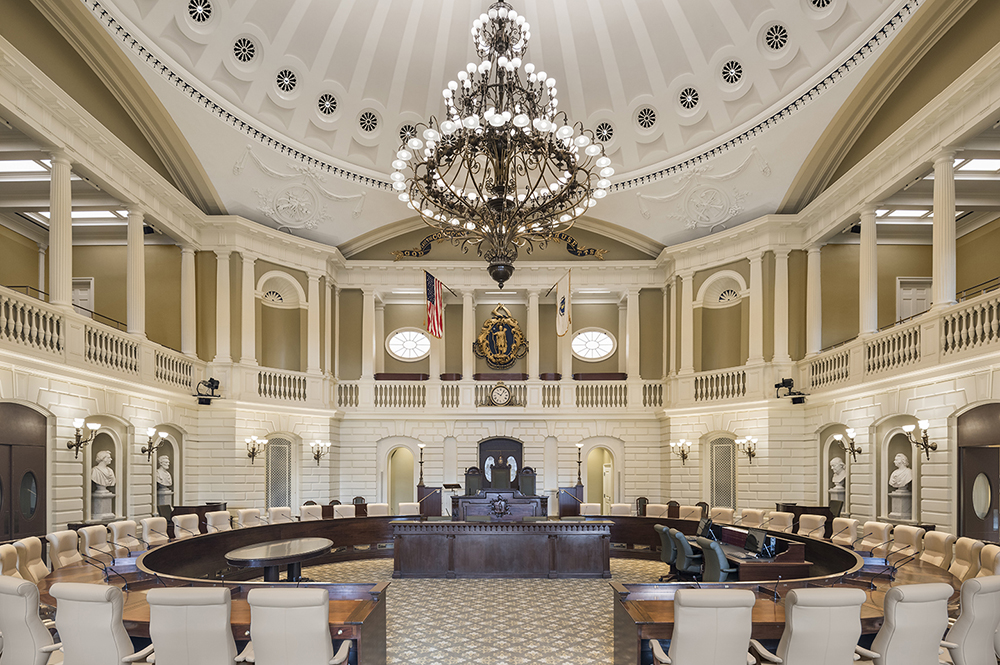 Boston, MA The Massachusetts State House may be 220 years old, but it has a gleaming new look, thanks to the efforts of Colantonio Inc., who partnered with the Division of Asset Management and Maintenance, the Bureau of the State House (BSH) and CBT Architects to make the “hub of the universe” shine even brighter.

The state house, considered a masterpiece of federal architecture and among architect Charles Bulfinch’s finest works, was built in 1798 and is designated a National Historic Landmark. The project team restored the historic senate chamber, which sits on the third floor directly below the iconic gold dome, and its related rooms. 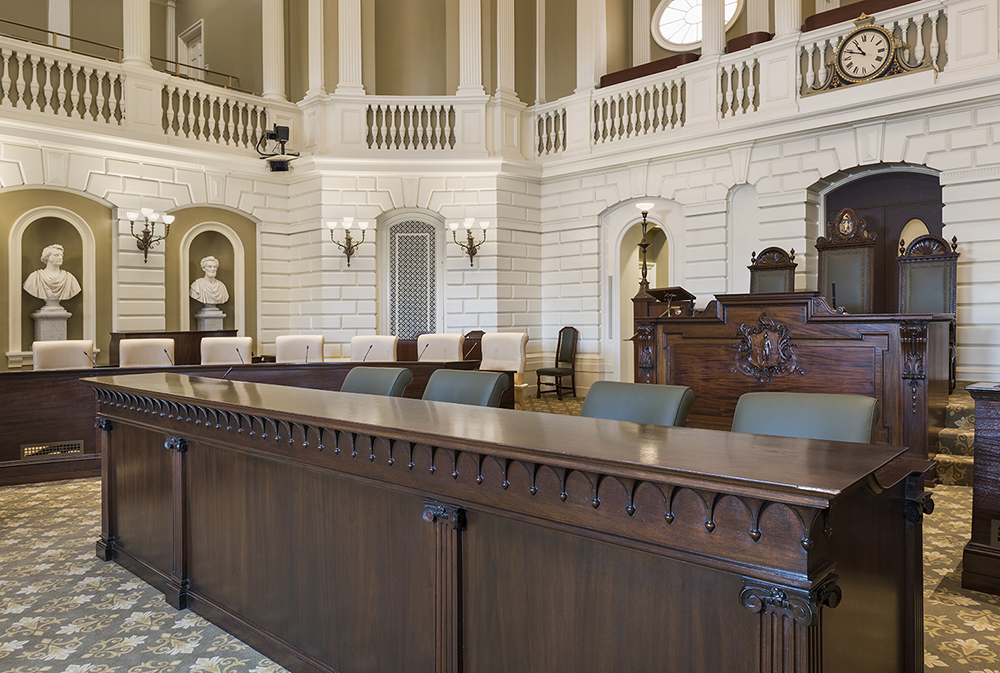 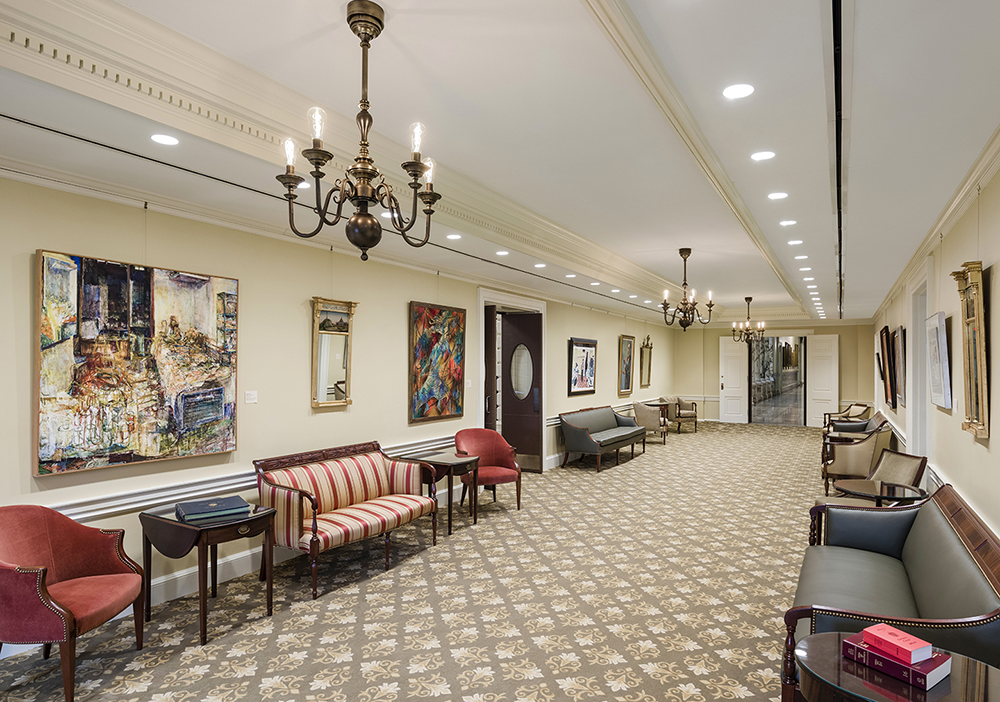 “In order to do this right, we had to understand the senate chamber’s history and how buildings were constructed back then,” said Fran Colantonio, CEO of Colantonio Inc. “A great deal of planning and thoughtful execution went into preserving the integrity of everything we touched.” 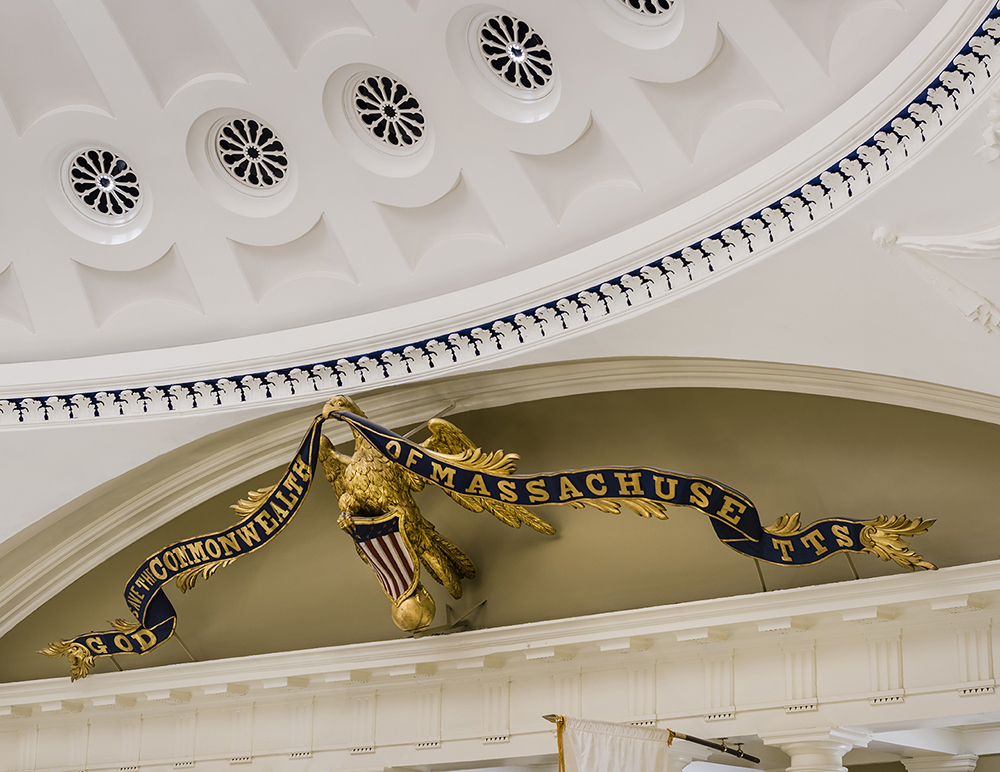 Although little had changed in the senate chamber since its last major renovation 120 years ago, age, wear, poor environmental systems and more than 20 coats of paint had led to cracked cornices, falling ceiling pieces and leaning columns. The space needed new or upgraded HVAC, safety, audio and information technology/data systems along with accessibility and functional improvements.

Historical elements such as stained-glass windows, marble busts, chandeliers, senators’ desks, the President’s Rostrum, the state seal, and the signature eagle and banner, were packaged up and sent out for refinishing according to the strict requirements of the Massachusetts Historical Commission (MHC). To restore the dome’s curved, sunburst ceiling, the crew installed a platform just below it supported by a massive network of scaffolding that spanned the entire chamber.

The project team encountered many unique challenges to complete the $15 million project before the senate convened its 191st session on January 2.

Work Constraints: As a national historic landmark in full operation, the state house has strict requirements. Given the close proximity of the governor’s suite and the senate president’s office, noisy construction work was done after business hours. Material deliveries and debris removal had to be scheduled through the BSH to avoid state house activities and could only be transported through public spaces before or after business hours. In addition, the entire length of the 300’ corridor had to be protected when materials were being moved. 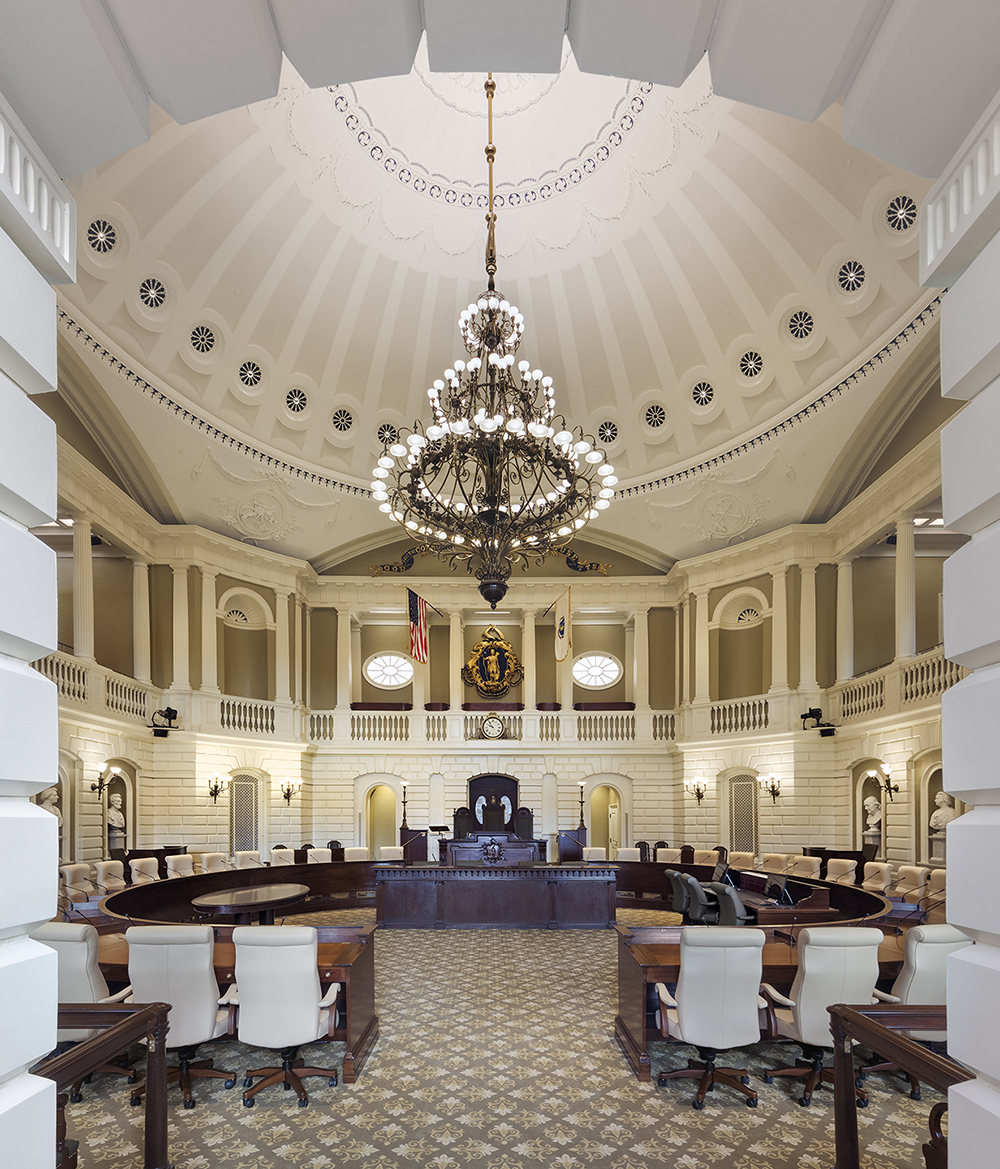 Rusticated Wall Panels: Each of the 1,557 rusticated panels (wooden blocks) that make up the Senate Chamber walls was carefully removed, catalogued and photographed. After being stripped of 20 coats of paint, each panel was examined and repaired. Once photographed and documented, they received a prime coat and one coat of finish paint before being wrapped and delivered back to the chamber. Installation of the renewed panels revealed cosmetic issues caused by decades of repair, paint, and caulking. The crew installed and took down the mock-up section several times to test solutions to achieve the desired finish.

Main Chandelier: The 30-foot brass chandelier, crafted in the late 1800s, weighs 1,850 pounds and holds 112 lights on several tiers. Each of the chandelier’s two thousand pieces was removed, photographed and either cleaned and waxed or repaired to precise specifications. A 200-page condition report was issued by the MHC for this restoration work alone.

Bartlett Hall Laylight: The scope included the addition of a work room behind the senate chamber in space that was previously unused. The space is located above a historical, stained glass laylight in the ceiling of Bartlett Hall, which had to remain open to the public. The laylight was removed for restoration, the space above it was demolished and the laylight opening and frame, including decorative plaster, was lowered by two feet. The new floor structure for the work space was then built on top without disturbing the existing decorative plaster ceiling in Bartlett Hall and without closing the space to the public.

Unforeseen Conditions: Demolition and construction work revealed many unforeseen conditions, often the remnants of antique M/E/P systems that were simply abandoned. Because old pipe and tubing were sometimes re-purposed for pulling wire and even for drainage, the crew had to ensure they would not inadvertently disturb an active system and interrupt a vital service. One discovery revealed ductwork that was holding up a wall, which prompted mechanical and structural design changes. Unforeseen scheduling issues arose because of the time required to duplicate some original furnishings. For example, hinges with specific thickness and length requirements had to be handmade. The historical lectern was sent to a foundry where molds of each piece were made to match the original.

New Air Handling Unit: One of the more challenging tasks was the removal and installation of the new air handling unit in the mechanical room, which was the attic space above the finished dome ceiling in the chamber. The crew chopped the old unit into pieces and removed them down a narrow set of stairs, which was the only access to the space from the inside. They used a 300-ton crane, parked in the portico, to hoist the sections of the new unit up to a temporary platform on the roof, next to a louver that was opened to provide access. The pieces were then rigged to a trolley system and lowered into place for assembly.

Colantonio was joined by many skilled subcontractors to make these renovations that will allow the state house to remain a Boston icon for many years to come. (Photo credit: Anton Grassl)